Need to disarm an IED? Make sure you’ve got your Super Soaker handy. Sorry, make that your “Fluid Blade Disablement... 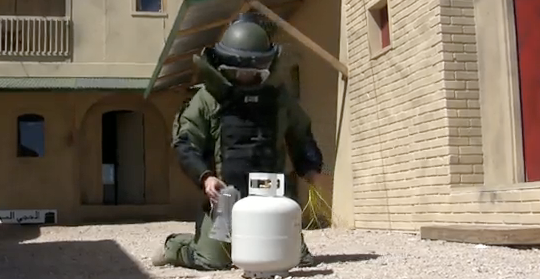 Need to disarm an IED? Make sure you’ve got your Super Soaker handy. Sorry, make that your “Fluid Blade Disablement Tool.”

The Stingray, the military’s newest bomb-fighting tech, is a small water gun developed by Sandia National Laboratories and a firm called TEAM Technologies. Far from dousing roadside bombs with water, it uses an ultra-high-pressure water beam to slice through steel, ripping bombs open before they can harm troops. Watch below as a propane tank meets an untimely end.

The Stingray involves a clear plastic water tank, about the size of a coffee pot, attached to an explosive charge. The detonation creates a shock wave that propels water toward a concave opening in the reservoir, which shapes the water into a blade. The device works at short range and over long distances, according to Sandia Labs.

Its plastic legs can be attached in various configurations so it can be placed almost anywhere to disable bombs. Paul Reynolds, TEAM Technologies’ program manager, said it is simple enough for robots to set up.

Sandia first built the Stingray in 2009 and licensed the technology to Albuquerque-based TEAM Technologies for mass production. Perhaps appropriately, the water gun’s inventors include retired Navy personnel, including a sailor with IED experience and a former Navy SEAL explosives expert.

The water acceleration happens too quickly to be observed by the human eye, so researchers had to use computer simulation and high-speed flash X-rays to fine-tune their design. Active-duty troops visited New Mexico to test the Stingray, according to Sandia Labs.

TEAM Technologies sent its first shipment of about 3,000 Stingrays to Afghanistan this summer.