A workhorse chopper gets a 21st-century overhaul 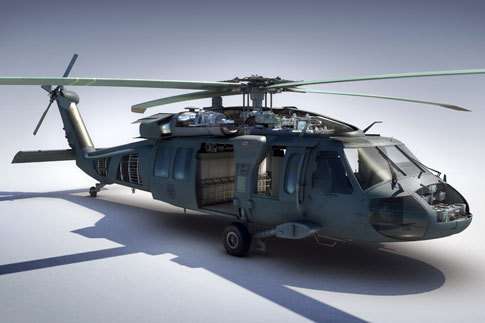 The Army salutes a reliable copter with a revamp. Illustration by Nick Kaloterakis (See what’s what on the Black Hawk!)
SHARE

The Black Hawk helicopter has served the U.S. Army well. But it’s been around since 1979. Time for a revamp, with advanced electronics, more-powerful engines, and various other tweaks. The UH-60M Upgrade, as it’s officially known, made its first flight last summer, and the Connecticut aircraft-manufacturer Sikorsky will start delivering them to the Army next year and ramp up to full production by 2013.

Here’s a look at what’s new, clockwise from its crown.

A pair of new turboshaft engines built by General Electric together deliver 3,988 horsepower. Combined with the new rotors, the helicopter generates 500 pounds more lift than its predecessor and can fly 17 mph faster.

For lightweight strength, the rotor blades contain a honeycomb-shaped core made of a Kevlar-like material called Nomex that’s wrapped in a fiberglass skin.

The UH-60M Upgrade will be the Army’s first fly-by-wire helicopter: Electronics, rather than a mechanical system of cables, pipes and hydraulics, connect the controls to the actuators that physically steer the aircraft. The fly-by-wire system also does a lot of the pilot’s thinking for him. It automatically handles basic coordination controls so the pilot can focus on the mission plan. It can even hover automatically, with no human input.

Pilots have at their disposal full-color flat-screen digital flight monitors, a “stormscope” that can spot severe weather fronts, a computerized system that automatically monitors the health of the entire craft, and plenty of other mundane-sounding but essential computer upgrades—new data connections, modems and GPS.

The lines and valves connected to the fuel tanks seal off in the event of a crash.