Who will build the fastest experimental helicopter? 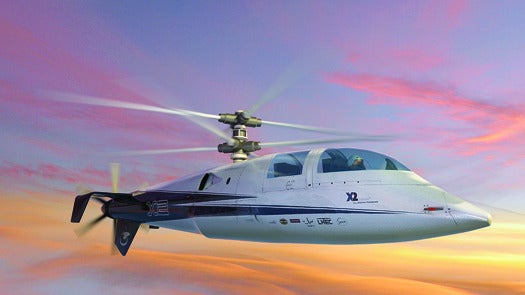 The very thing that makes the helicopter a marvel of maneuverability—a rotor that generates both lift and propulsion—also makes it an airborne plodder. As a helicopter gains speed, the rotor blades encounter more drag and require more power to cut through the air. Complicating matters, the blade moving into the wind generates more lift than the blade moving away from the wind. This creates an imbalance known as lift dissymmetry that can cause the helicopter’s nose to pitch upward and result in violent shaking, which is, of course, counterproductive to breaking speed barriers.

Sikorsky’s answer is the X2, an experimental chopper that last year unofficially broke the helicopter speed record of 216 knots (249 mph), set in 1986 by the Westland Lynx ZB500. The X2 features two main rotors and replaces the conventional tail rotor with a propeller. The rotors spin in opposite directions to counteract each other’s torque and balance the upward forces acting on each blade. The tail prop, meanwhile, helps the rotors push the three-ton X2 through the sky, letting the rotors spin at a safer speed and dedicate more energy to lifting the craft than moving it forward. 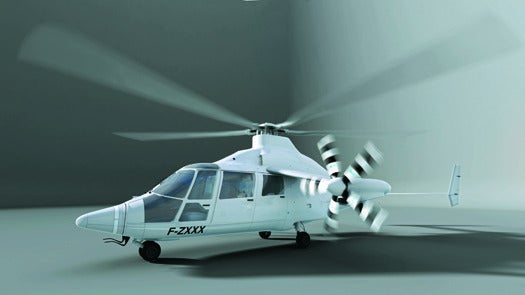 In January 2008, engineers at Eurocopter set out to build a high-speed helicopter of their own. They wanted it to be fast, but they also wanted it to operate in a manner familiar to most pilots. The resulting X3 flies so much like a normal helicopter, says Jean-Michel Billig, the vice president of Eurocopter’s R&D; team, that it “does not require any specific training.” And a helicopter based on X3 technology, he notes, will cost just 25 percent more to produce than Eurocopter’s conventional helicopters of the same size, such as the $10-million EC155.

In September, Eurocopter unveiled its own potential record-breaker, the X3, which takes a very different approach. Instead of a tail prop, the helicopter distinguishes itself with a pair of wing-mounted propellors. In this configuration, the rotor can spin at even slower speeds and stick to what it does best—creating lift—while the propellors generate forward thurst and speed. In March, Eurocopter will put the X3 through its next round of testing, when it is expected to reach speeds of up to 220 knots (253 mph).

Is a rivalry brewing? Both companies claim to have evaluated and rejected their competitor’s approach during initial planning. “We are the only one aiming at validating the concept of a cost-effective high-speed helicopter,” says Jean-Michel Billig, the vice president of R&D at Eurocopter. The names of the prototypes certainly suggest a spirit of one-upmanship. Although Billig calls the choice of X3 “coincidence,” Chris Van Buiten, the director of Sikorsky Innovations, says jokingly, “We’ll name our next one the X-Bajillion to make sure we win the grade-school naming contest.”

To be fair, neither company invented the idea of supplementing, or even replacing, propulsion from the rotor. In 1963 Bell Helicopter strapped twin turbojet engines to a modified YH-40 Iroquois, which reached speeds of over 274 knots (315 mph). It also gobbled fuel.

Balancing extra weight and speed with increased fuel demand will be a challenge for each company as they advance their designs. Eurocopter remains secretive about its next steps, but Sikorsky is aiming for the military market first; Van Buiten says it plans to produce an armed version of the X2, called the X2 Raider, by 2014.