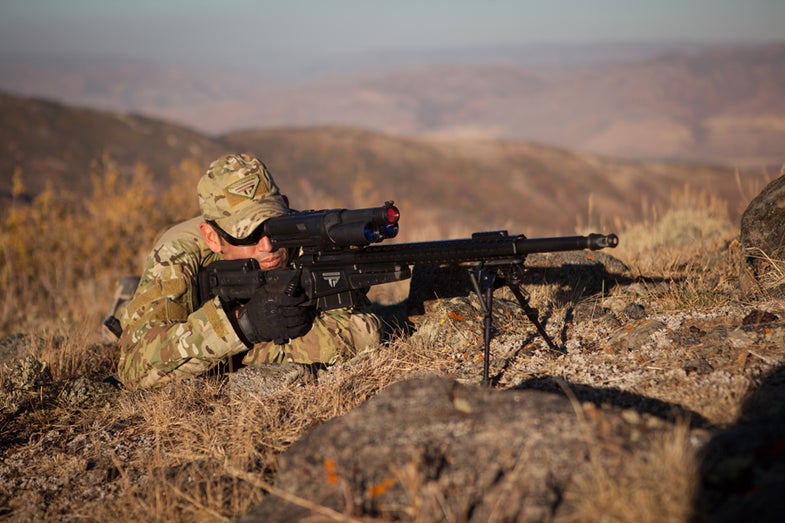 Consider it performance enhancement for snipers. Guns made by a company called TrackingPoint, which include a special computer and targeting system built into the gun itself, turn inexperienced marksmen into expert shots on the first try, and could make already-trained snipers and sharpshooters even better. Now, the technology is no longer just a novelty for wealthy hunters; at SHOT Show (a major gun exposition), a marketing official from Trackingpoint revealed that the United States Army bought “several” of the rifles, and is rumored to be evaluating them for military use.

TrackingPoint rifles are expensive, running up to $27,000 apiece. For comparison, the M4 carbine, currently a standard rifle used by the United States military, runs about $700 apiece. The M70, a sniper rifle used by the U.S. Marine Corps since the 1960s, cost about $6,500 in 2006. But the point of the gun isn’t for cost savings (though there may be some in reduced time to train snipers, if it becomes adopted); the point of the gun it to make the first shot count.

It does that by using a computer to calculate the perfect shot: First, the shooter sees the target on their screen, which is a camera instead of the usual telescopic lens. Then the shooter tags the target, and adjusts the gun until its crosshairs match up with the tagged target (for hunters, an animal, and for snipers, a human). Sensors in the gun and the camera feed into into the computer, making sure that the shot flies true, accounting for the wind speed and temperature and other factors that could make shooting difficult. Then and only then does the gun fire, making the first shot far more likely to be a hit than if an average shooter were relying on eyesight and judgement along.

It’s not yet known if the Army will adopt the guns, and if they do, to whom they would be assigned. Still, having the guns on hand for testing is the first step to a terrifying future of point-and-click sniping.