Future whirlybirds may change their rotor blades to suit the mission 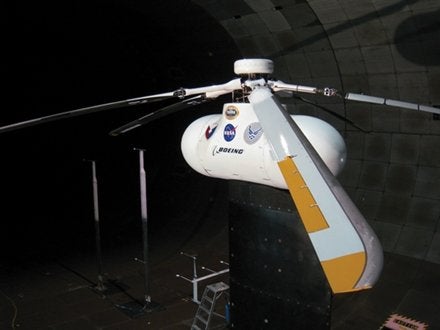 Military lab DARPA has put out a call for rotor blades that could boost payloads by 30 percent and range by 40 percent, as well as reduce sound by 50 percent and vibration by 90 percent compared to the usual fixed rotor blades.

The agency envisions helicopter blades that can morph into different modes for “fuel efficiency” or “high maneuver,” as examples. Adaptive technologies could change the diameter, sweep, chord, and tip shape of the blades, as well as other features. Airfoil sections of the blades might incorporate flaps, slats and active flow control.

“Active rotor technology will enable morphing of the rotor to optimize performance, resulting in rotorcraft with revolutionary advances in mission robustness, and facilitating multi-role capabilities,” DARPA noted in its announcement earlier this month for the “Mission Adaptive Rotor” program. It plans to invest in key technologies that could lead to such adaptive rotor blades for next-generation military aircraft.

Aviation Week reports that aircraft manufacturers have already begun experimenting with more limited adaptive blades. Sikorsky has begun experimenting with a rotor system that uses active blade flaps controlled electromechanically, and plans to put the active rotor through a wind tunnel next year at NASA Ames in California. That’s the same wind tunnel where Boeing tested a SMART rotor with piezoelectric-controlled flaps.

Any proposals that respond to DARPA’s call would do well to account for the trickiness of helicopter rotor dynamics. We say bring on the transforming blades.