Autonomous Flying Ambulances Could Save Troops

When thereâ€™s no safe escape, call in the Mules: These unmanned aerial vehicles could save lives on the battlefieldâ€”and off 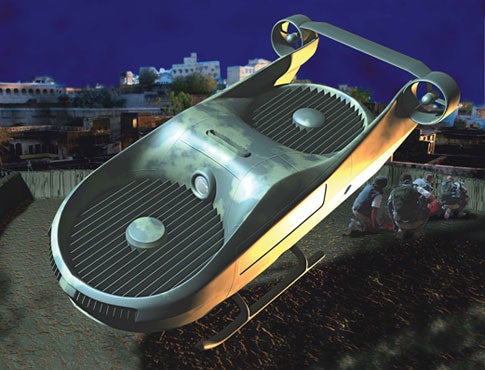 U.S. troops are pinned down in a crowded city center. Several are wounded and need immediate evacuation. There are miles of labyrinthine roads and thousands of enemy gunmen between them and the nearest base. The threat from rocket-propelled grenades has grounded the big helicopters.

There’s one, final hope for these soldiers: the Mule, a compact, fully autonomous medevac aircraft powered by ducted fans-fully enclosed spinning blades that are smaller and more efficient than conventional helicopter rotors. This concept, created by Israel-based Urban Aeronautics, could revolutionize military and civilian emergency care. Within minutes of troops radioing in their GPS coordinates, two drones dart in at 100 mph and land neatly on a narrow rooftop. The casualties are loaded into pods on the UAV’s sides-each vehicle can carry two patients-and the fore-and-aft lift fans speed up for vertical takeoff. Once airborne, a medic’s voice, piped in by radio, comforts the wounded soldiers, distracting them from the gunfire outside and the disconcerting notion that their rescuers are robots.

The idea, says 56-year-old designer Rafi Yoeli, is a vehicle that can brave dense forests, urban centers and combat zones where choppers, with their vulnerable rotors, can’t. Yoeli, who founded Urban Aeronautics in 2001 after decades with companies like Boeing and Israeli Aerospace Industries, is currently building a prototype, aiming for a first flight in 2009. As an unmanned craft, it’s both light and able to risk enemy fire. Yoeli is also trying to make it inexpensive, and civilian and military authorities in the U.S. and elsewhere have already expressed interest in his $1.5-million concept.

The dual-ducted fan configuration used on the Mule is derived from failed “flying jeep” experiments of the 1950s. Those early models were doomed by aerodynamic problems, excessive weight and ducted fans that were too weak. Yoeli relies on new lightweight composite materials, sophisticated autonomous flight software and a patented duct design that boosts the fans’ efficiency.

The key is a series of directional vanes on both the top (inlet) and bottom (outlet) of the fans. This type of “vectored thrust” steers the craft using directed airflow instead of control surfaces. “It gives you six full degrees of movement,” says Janina Frankel-Yoeli, Rafi’s wife and marketing director.

Urban Aeronautics faces several hurdles. “Ducted fans have been around for years,” says Bob Behler, a retired Air Force general who once flew medevac aircraft and now works for the MITRE Corporation, which conducts technical research for the government. “They’re very efficient, but reliability is questionable with vectored thrust.” Nevertheless, Behler says that ducted-fan aircraft are great for urban operations. “You’ve got to have something that travels slowly and can maneuver around obstructions,” he explains. He remains concerned, however, about not having a medical attendant with the patient.
Frankel-Yoeli agrees, up to a point. “For regular evacuation, it’s certainly not the preferred means,” she says. “But if the casualty is in critical condition and you have no other means of getting them help, it’s not a difficult question.” The biggest obstacle, she contends, is psychological. “The problem is overcoming the natural fear of entering a vehicle without a pilot.”

The Mule uses ultraefficient ducted fans-basically, fully shrouded helicopter blades-to lift off vertically. Vane systems channel thrust in any direction, allowing the Mule to move sideways and forward and backward without rolling. If the front and back rotors change their relative speeds, the result is a yawing movement to the left or right.

A single Rolls-Royce 250-C30 turbine helicopter engine powers the counter-rotating, three-bladed fans in front and back. The engine exhausts through the top of the fuselage.

Enclosed rotors in ducted fans make the Mule less vulnerable to gunfire and permit it to fit into small spaces.

In forward flight, louvers in front and back [not shown] open to reduce drag. Mounted fans add power.