Crowd-Cataloguing The Guns Of World War One

The guns of August, and September, and 49 more bloody months. 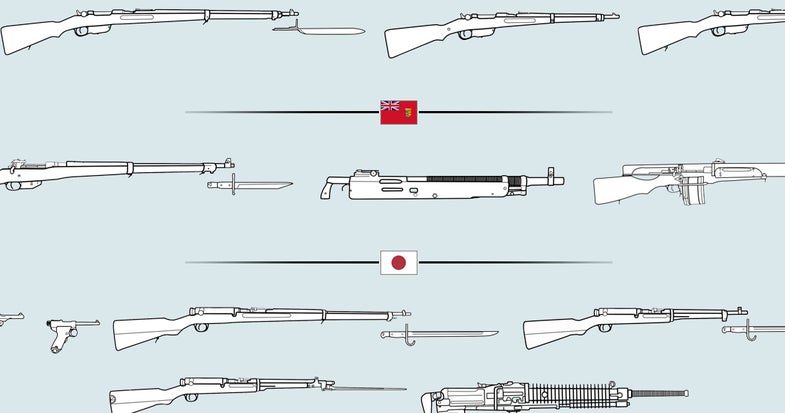 Detail from the larger image. At the center is the Colt/Browning Model 1895 machine gun, used by the Dominion of Canada and the Kingdom of Belgium in World War I. C&Rsenal
SHARE

A century ago this week, Austrian Archduke Franz Ferdinand was assassinated by Gavrilo Princip, sparking a chain of events that would ultimately become World War I. Fought primarily between a German, Austro-Hungarian, and Turkish alliance known as the Central Powers and an alliance of the British, French, Russians, and later Americans known as the Allies, the war ended with a revolution in Russia, a regime change in Germany, and millions upon millions of soldiers dead. The Small Arms of WWI is a crowdsourced effort to identify all the various pistols, rifles, bayonets and other human-sized weapons of war used in that conflict.

Part of what made World War I especially deadly was the proliferation of machine guns, which made defending territory easy and taking it very, very hard. Several are already identified in the project, from Britain’s Lewis light machine gun to France’s Hotchkiss M1909 to the German Maschinengewehr 08. In contrast with the machine guns, plenty of pistols and bayonets are featured, which were used by the shock troops that survived crossing no-man’s-land into enemy trenches and then fought the defenders in hand-to-hand combat. The display is also dominated by rifles, many of them bolt-action, which could hit targets farther away than most machine guns but lacked the rapid-fire lethality presented by automatic weapons.

While the project is still a work in progress, in many ways the general contours of the war are visible through the weapons already documented. Japan was one of the participants in World War I, having joined the war on the side of the Allies in 1914. Japan mostly kept its involvement limited to taking over German colonies in Asia, but the arsenal available is indicative of Japan’s growing world-class military strength, which would only increase over the next decades. Other countries have limited arsenals matching their limited role. Greece, which entered the war late and fought minimally, only has two rifle types listed. There’s a qualifier to this: Austria-Hungary, one of the major powers of the war, mobilized 7,800,000 troops but is only represented by three rifle designs and two kinds of pistol. Hopefully that will improve as the project continues.

There’s also a tragic modernity to this list. Among the British weapons is the Lee-Enfield MkIII rifle. Mass-produced for the war, the rifle is accurate and durable enough that American Marines, fighting in Afghanistan in 2010, captured a working Lee-Enfield from the Taliban. It was stamped with the year of manufacture: 1915.