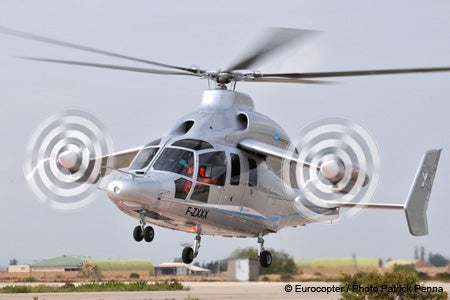 The faceoff between the two helicopter companies stems from competition to deliver more speed without losing efficiency, overcoming the usual trade-off between speed and hovering efficiency. When rotorcraft are pushed to high speeds, the rotor tips approach supersonic speeds, which threatens the stability of the base of the rotor.

The helicopter/airplane hybrid design is intended to address this problem, while Sikorsky’s approach relies on two main rotors atop the cabin that spin in opposite directions, neutralizing the spinning force and providing a speed boost.

Since the X3’s first flight was only 3 weeks ago, on September 6, while the Sikorsky X2 has two years of test flights under their belt, it’s too soon to say who could come out on top. But since they both already boast sustainable speeds some 100 knots higher than typical helicopters, it’s sure to be an exciting race.