Nearly a Century After We Started Drooling Over Them, America Gets Its First Police Auto-Gyro

Today is a day for fulfilling the dreams of PopSci’s past, it would seem. Following the amphibious 70’s-esque camping trailer,... 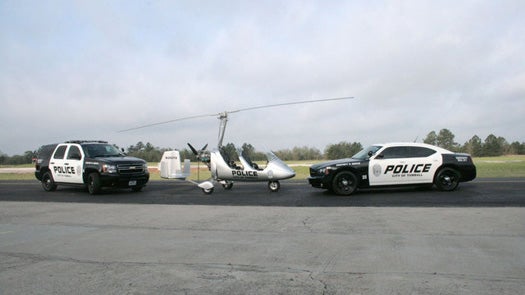 Today is a day for fulfilling the dreams of PopSci’s past, it would seem. Following the amphibious 70’s-esque camping trailer, Jalopnik takes a whirl in the Auto-Gyro MTOsport, America’s first police gyroplane, stirring up fond memories of all the fancy fliers we dreamed up in the 20s and 30s.

Clickhere to launch a gallery of auto-gyros, gyroplanes, autogiros, or whatever they’re called, from the PopSci archives

The MTOsport is headquartered in Tomball, Texas, and at $75,000 costs a fraction of what a police force would spend on a helicopter. Operating costs are low too, at just $50 an hour, largely because it runs on regular pump gas.

The roofless, doorless contraption uses a rear-mounted propeller for speed, and an unpowered, angled rotor, spinning at 80 to 120 RPM, uses the air pushed into the blades from forward motion to create lift. It needs a little more than a hundred yards to take off, and then climbs into the air at a rate of 13 feet per second, eventually hitting speeds of up to 115 mph. Despite the lack of roof, the auto-gyro is arguably safer than a helicopter because it’s always in autorotation. If power is lost, helicopter pilots have to ease their aircrafts down and hope that autorotation engages. The MTOsport would just glide down gently.

On the downside, no roofs or doors means riding in bad weather will be rough, and without thermal imaging cameras or large light beams, auto-gyros are best flown during the day. Even with these limitations though, the cost and efficiency of the auto-gyro makes it incredibly helpful for police forces in underserved areas like Tomball. The MTOsport can be in the air and on a mission within 10 minutes, and, in terms of coverage, is equal to the deployment of 20 officers, according to Tomball’s chief of police. 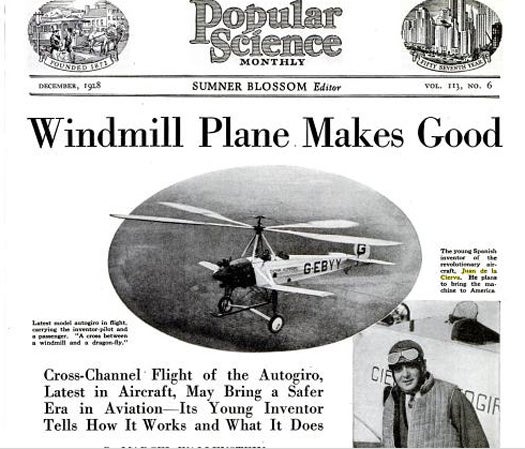 The Cross-Channel Flight of the Autogiro, December 1928

“Like a leaf drifting gently to the ground, a flying windmill dropped out of the sky the other day,” this story poetically begins. Juan de la Cierva, the inventor of the auto-gyro (also spelled “autogiro” or “freak plane,” in this article at least) flew his creation across the English channel. He later announced his intention to bring the craft to America in the near future, which he eventually did, in 1929. Read the full story here. 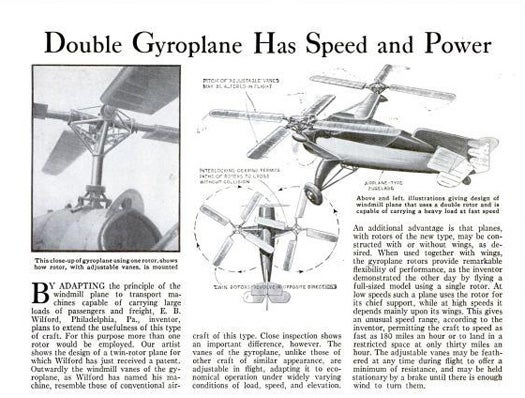 The only thing better than one gyro is two, as Philadelphia’s E.B. Wilford knew only too well. He designed this aircraft with twin rotors that were adjustable during flight. Wilford also claimed that the craft could reach speeds of up to 180 mph. Read the full story here. 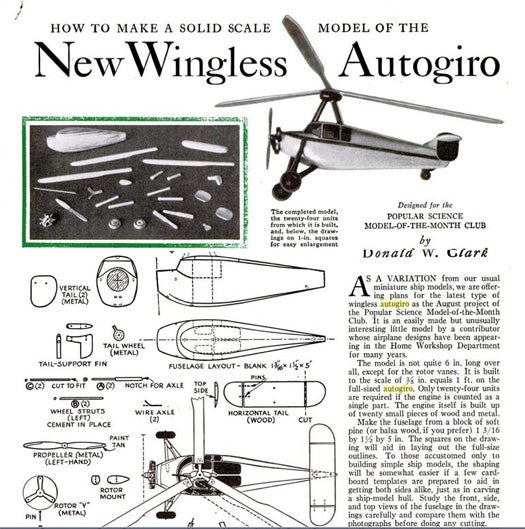 Build Your Own Model Autogiro, August 1935

PopSci used to have a “Model of the Month Club” feature, that apparently usually made model ships. But this month they deviated from the script to join the autogiro craze. When completed, your little gyroplane will stand about six inches long, not including the blades of course. Read the full story here. 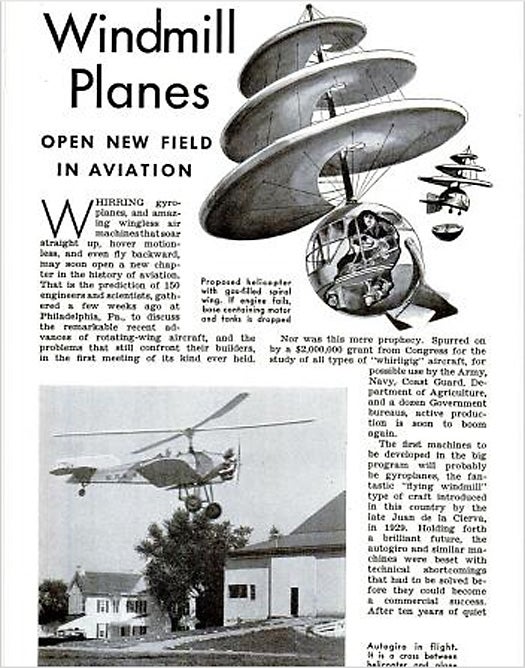 Congress offered up a $2 million grant for the study of “whirligig” aircraft such as gyroplanes, and science delivered. PopSci predicts that auto-gyros will be the first machines to be developed within that program, as “the knottiest problems have been overcome.” Speeds were increased from 70-80 mph to 135 mph and control of the crafts was improved. Other rotary aircraft, such as the turnip-esque helicopter with a gas-filled spiral wing pictured here were also developed around the same time. Read the full story here. 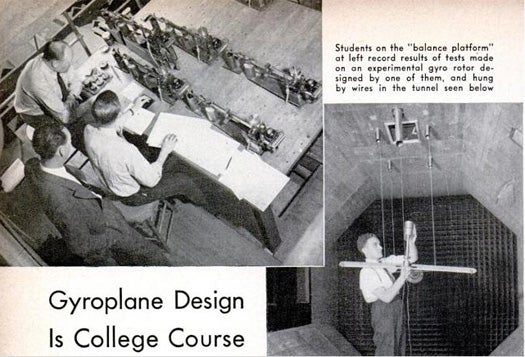 The first college course in the world on gyroplane design was established at the College of Engineering of New York University in 1939. Students designed and tested projects in the classroom and the school’s nine-foot wind tunnel and worked closely with American airplane and auto-gyro manufacturers. Read the full story here.
Security
Popsci Archive