Are Autonomous Helicopters The Next 18-Wheelers?

The K-MAX drone made a name for itself transporting supplies to troops in Afghanistan. Will the unmanned helicopter start delivering commercial cargo in the U.S.? 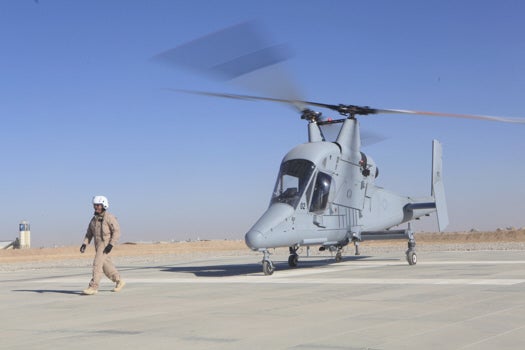 A detachment of Marines from Marine Unmanned Aerial Vehicle Squadron 1 in Afghanistan completed their first unmanned aerial system cargo delivery in a combat zone, Dec. 17. The unmanned helicopter moved about 3,500 pounds of food and supplies from Camp Dwyer to troops at Combat Outpost Payne. The helicopter, an unmanned variant of the K-MAX, completed the delivery in about an hour and a half. Cpl. Justin M. Boling
SHARE

The K-MAX optionally-manned helicopter is a powerful battlefield work horse. Over the past 16 months, two (yes, just two) K-MAX drones delivered 3.2 million pounds of cargo to Marines in Afghanistan. This is simultaneously more like the future and less revolutionary than headlines about pizza-delivery drones would suggest. By 2020, the Federal Aviation Administration predicts there will be 15,000 civil and commercial drones flying over the U.S., doing jobs like transporting cargo and inspecting pipelines.

In Afghanistan, the K-MAX’s ability to fly at night, sans pilot, made it incredibly useful for getting military supplies from point A to point B without risking human life. At home in the U.S., the unmanned helicopter could find a new job transporting bulk cargo. Because the K-MAX can fly continuously (there’s no on-board operator who’ll need to stop from fatigue) and mostly autonomously, it has major economic potential.

The K-MAX can carry 6,855 pounds at speeds of about 92mph, and it isn’t constrained by road conditions or traffic. Here’s the limitation: Commercial cargo movement means competing on the market, and a semi-truck can carry up to 60,000 pounds of cargo. The 18-wheeler still has to deal with roads and observe speed limits, but most of that disadvantage is off-set by the fact that it can transport more than eight times as much cargo.

So long as cheaper options remain viable, the K-MAX may be best suited for more dangerous jobs like rescue missions and construction, though there are likely to be times when unmanned helicopters are the right call for a cargo supply need. I wouldn’t count on it delivering pizza just yet.