A Cambodian case study finds that people developing diabetes today have parents who went hungry in the 1970s. 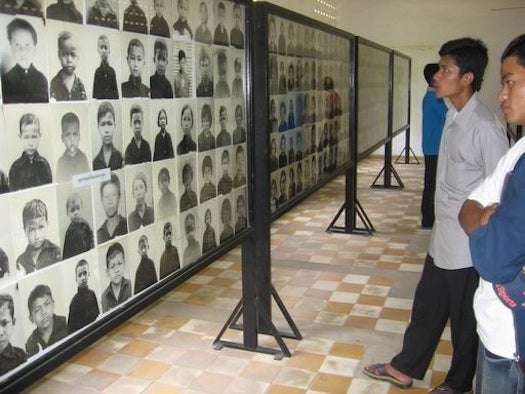 So many adults in Cambodia are getting diabetes at such a young age, it’s unbelievable. “You can go to every village with me and see it,” endocrinologist Lim Keuky told PRI. “When I go abroad to developed countries, people say I’m lying. I’m not lying.”

Cambodians are getting type 2—A.K.A. adult-onset—diabetes in their late 30s. In contrast, the average age of diagnosis in the U.S. is 54. Sure, Cambodians now eat more and do less physical work than they did in decades past. But that’s not enough to explain their unusual diabetes rates, PRI reports. Something else is happening.

This new generation of diabetes patients was conceived and born during the Khmer Rouge regime, between 1975 and 1979. Scientists think their prenatal exposure to their mothers’ starvation set them up for diabetes later in life. Plus, while the PRI story doesn’t explicitly say so, it seems scientists think there may be an epigenetic effect going on, too. That is, being a fetus in a starving mother actually altered these people’s DNA in a way that may be inherited by their own children.

The PRI story hints at epigenetics in this quote from Dutch scientist Rebecca Painter:

Scientifically, this is really interesting. There aren’t many population studies of epigenetics, which has seen a boom in scientific attention only in the past ten years or so. Could the Khmer Rouge generation be another example? If so, that means Cambodian doctors need to be on the lookout for health problems not only in this generation, but the next one, too.

“Epigenetics” describe modifications to people’s DNA that don’t affect the sequence of the DNA. Physically, epigenetic changes show up as little chemical decorations added onto people’s genes. You can think of them as chemical baubles and tinsel. Previous studies have shown starvation is able to trigger changes to people’s epigenetics.

Biologists originally thought that no matter what havoc the environment wrecked upon people, the DNA they passed onto their children remained unchanged. (Short of getting irradiated, that is.) More recently, however, scientists have found that some epigenetic decorations are inheritable, just like DNA is. That means the starvation Cambodian people experienced in the 1970s may affect the health of their grandchildren.

Painter, who talked with PRI, examined one classic epigenetic case, the Dutch Hunger Winter. During the Dutch Hunger Winter, Nazis blocked food supply from coming into the western Netherlands. Dutch folks experienced extreme starvation. Scientists later found that not only were babies born during that time smaller than their siblings born before or after… their own children were born smaller, too. The Nazis left their mark on two generations of Dutch.

PRI doesn’t mention if doctors have noticed any health problems in the children of those conceived during the Khmer Rouge regime. Maybe they aren’t old enough yet. But this should be a case to watch, both for doctors in Cambodia, and for scientists around the world, who may see the same patterns repeated elsewhere.