They’re crawly and they’re creepy. Mysterious and eerie. They’re altogether icky. They’re the louse-y family and they have haunted human... 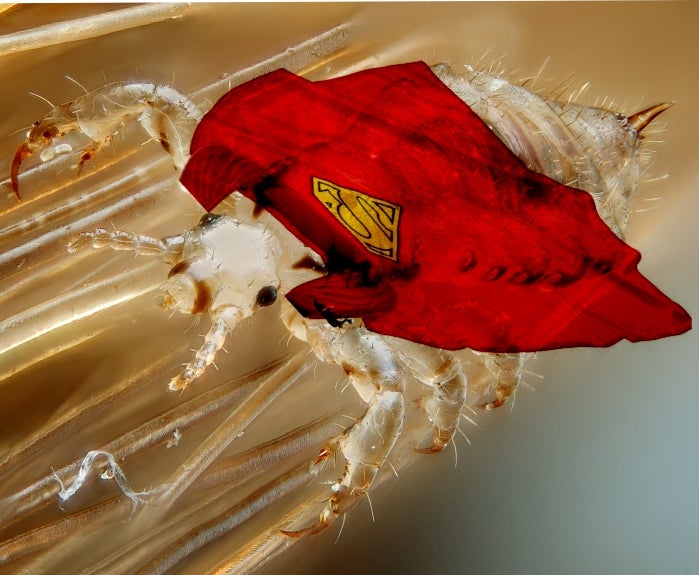 They’re crawly and they’re creepy. Mysterious and eerie. They’re altogether icky. They’re the louse-y family and they have haunted human hair (and nether regions) for millennia. For parents, the arrival of these microscopic creatures on the scalps of children can lead to quite the headache as remedy requires a rigorous regimen of de-infestation as well as routine shampooing with unpleasant chemicals.

One of the most popular options is a group of synthetic chemicals based on a natural insecticide found in the chrysanthemum flower, pyrethrum. Called pyrethroids, these molecules target the nervous system of a variety of insects, including flies, wasps, cockroaches, mosquitoes and the louse, leading to rapid paralysis and death. Thanks to their effectiveness, they are widely used and can be found in any garden store and pharmacy, particularly in anti-lice treatment shampoos.

Unfortunately, much like antibiotics, these chemicals do not act in a passive manner but in an active one, meaning that the chance for resistance is not only possible, it is likely. Even as far back as the 1950s, insects with the ability to resist pyrethrum, known as knockdown mutants, were known. Back then, there was no ability to test for genetic mutation and as such, the evidence was regarded mainly as a fluke, rather than a trend. But by 1969, as antibiotic resistance was rising, a call to be mindful of a potential rise in insecticide resistance was made. There was every indication that the shelf life of pyrethrum and its associated chemicals was limited.

By 1994, the mechanism of resistance was elucidated. As expected, a mutation in the target molecule of the nervous system had occurred, preventing pyrethrum performance. The only question was how prevalent the mutation was in the normal insect population and whether this would have any effect on human health. As the hunt for resistance ensued, the answer was relatively clear: the mutation was everywhere and was spreading worldwide. It was only a matter of time before lice also gained the mutation.

Within five years, the mutation was found and over the coming decade, its prevalence was not only shocking but depressing. By 2011, these super-lice existed in over a dozen countries; some of which, such as Australia, had only resistant populations. For the Australians, pyrethrum and pyrethroids would be considered useless. The continent had lost a main weapon and would have to turn to other means.

Although the situation was dire in the Land Down Under, the statistics for North America were more promising. The mutation was there but in lower amounts. Some places, such as Minnesota and Florida did have higher levels but for the most part, there was still hope for the future. But this week, a group from the University of Massachusetts changed all that, revealing just how the resistance has grown and spread, particularly into Canada.

The team went about their study in the same way as a detective. They used lice either collected previously or in real time from a number of locations including Arizona, California, Florida, Texas, British Columbia, Ontario and Quebec. Taking the critters to the lab, they analyzed them genetically for the presence of the mutation. After all was said and done, they determined the percentage of positive pests for each region.

The results were even worse than expected. In every region, almost all the lice had the mutation. Instead of discovering small pockets of resistance, the researchers found it was rampant. There was almost no indication of lice that could be killed with pyrethrum or pyrethroids. Worse, a comparison to just three years earlier revealed the spread was unstoppable. The authors suggested the results were not only a message but also a harbinger. In order to beat lice in the future, alternate measures may be necessary yet they too could eventually become worthless should resistance appear and spread.

While this lousy situation may appear to be shocking, few differences exist between these events and what has been seen in the world of antibiotic resistance. Much like the identification of pyrethrum resistance decades earlier, the development of antibiotic resistance was known as soon as these miracle drugs became publically available. Yet, few paid attention. History has since shown what happens when a warning is not heeded. Today, much like the end of pyrethrum-based insecticide, we are faced with the end of antibiotics and must look to other directions for the future.

In light of the data, we need to look towards less synthetic paths and return to more natural ones. In the case of antibiotics, the use of phages and other microbes may offer hope. In the case of the pyrethrum- and pyrethroid-resistant lice, the use of natural shampoos may offer a direction for the future. Epitomizing this is a treatment containing coconut oil and anise that outperforms its synthetic counterparts. The answers are apparent but require more lateral thinking to ensure moving forward does not leave us scratching our heads later on.