Faces, Spaces, Siblings: What Do Babies See All Day Long?

There comes a time in every baby’s early life when caregivers inquisitively peer over the sides of the crib. “What... 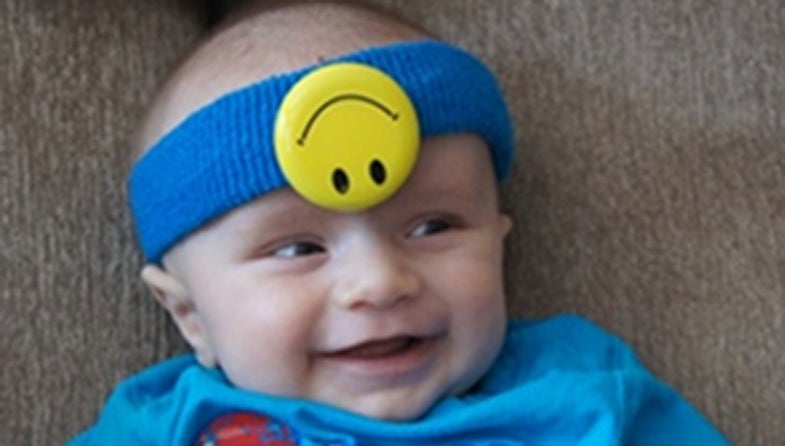 There comes a time in every baby’s early life when caregivers inquisitively peer over the sides of the crib. “What on earth is that baby looking at?” they wonder.

Now, scientists are getting glimpses of the world from a baby’s perspective. In the first-ever babycam studies, Nicole Sugden and colleagues at Ryerson University in Canada, attached tiny cameras (hidden in the left eye of the smiley face) to babies’ heads to see exactly what they look at all day.

Though the cameras didn’t have eye-tracking capabilities, it was pretty clear what was in the babies’ field of view. “There were times that mom’s face took up the entire camera,” Sugden told KinderLab.

The idea was that adults aren’t in the best position to understand the world from child’s perspective. Previous work by Linda Smith at Indiana University used cameras to track the world from a toddler’s point of view and found that the only thing that could predict what a toddler would learn in a certain situation was captured from the perspective of the toddler.

“We were hoping that in seeing what infants are seeing, we can better understand how they do develop their abilities to tell different people in the world, and perceive faces,” says Sugden.

The researchers used 1 and 3-month old babies, and asked the parents to turn on the head-mounted babycam for two weeks, using it whenever the baby was awake and alert. They ended up with 47 hours worth of footage, which then had to be sifted through by research assistants and tagged with what the baby saw.

And what did the babies see? Faces. Lots and lots of faces.

The one-month-olds were exposed to faces 25% of their waking hours, and the three-month-old saw faces 26% of the time.

So what else is there in a baby’s life? That depended on the family, says Sugden. “A lot of video had a playmat with toys overhead. We also saw changing tables, ceiling and wall available to them,” she says. “It really depends heavily on what experiences the parents were exposing babies to.” The results were published in the journal _Developmental Psychobiology _earlier this year.

The period of 1 to 3 months is interesting to study, she says. Infants aren’t mobile and they’re gaining a lot of information about the world – especially coming up with preferences for people who look like them. “1 to 3 months is the earliest age when we’re starting to look at preferences for faces,” Even a few hours old, babies prefer their mother’s face over other types of faces. But before 6 months, babies don’t show a preference for faces of their own race over other races, while later on they do. “We want to know how they learn the preference,” says Sugden. Looking at faces helps the baby brain develop, but the trick is figuring out exactly how.

She plans to use the video data for other studies, too, including looking at sibling interactions with newborn babies. Sugden says she was a little surprised at the variability in how much time siblings spent with the infant. “Some siblings were really invested in the baby, and others we rarely saw. It didn’t seem to be a function of age.” Research does show that children who have siblings do show a better ability to recognize children’s faces when they’re older. She also plans to quantify how often the newborns see emotions.