A new study seeks to explain why domestic cows around the world are less fertile now than they were a generation ago. 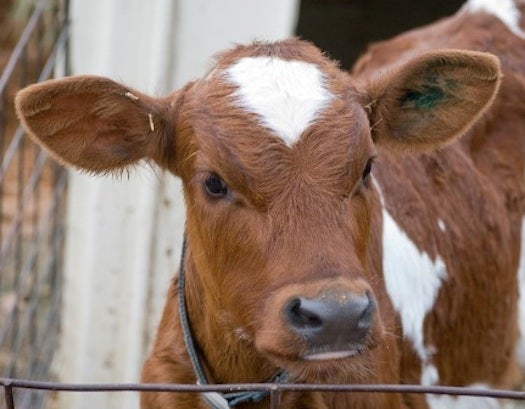 After generations of careful breeding, dairy cows around the world produce more milk than ever. At the same time, they’ve actually become less fertile, a phenomenon farmers and researchers have worried about for years.*

Now, a team of European biologists has uncovered one reason behind the decline, at least for several types of Danish cattle. The same genes that make cows produce more milk also kill off cow embryos, they found.

The European researchers found that up to a third of Nordic Red Cattle are missing one copy of each of the same four genes. (Like humans, cows are supposed to have two copies of all of their genes, one from their moms, and one from their dads.) Having no copies of those four genes is deadly, but at the same time, having one copy of each makes a cow produce more milk than normal cows that have two copies. Those missing genes are a gift with a dangerous catch.

Of course, before this study, farmers didn’t know how all of this worked. They simply chose high-producing cows to breed, thus passing on their shortened genes. That’s why the genetic flaw is so common in Nordic cows. Inbreeding makes the situation worse, but, with artificial insemination, it’s common on farms.

Those missing genes are a gift with a dangerous catch.

Farmers could improve things by checking whether the bulls they use in breeding are missing copies of these four genes, Goutam Sahana, a Danish geneticist who worked on the study, said in a statement. Those that are shouldn’t mate with high-milk-producing cows, which may be missing those genes, too. By preventing animals that are both missing genes from mating with each other, “a quantum jump in fertility could be achieved in Nordic Red breeds,” Sahana said.

What about cattle in the U.S.? This study looked only at Nordic herds, so it can’t say whether American cows have the same genetic flaws. But American researchers are also looking into genetics for an explanation of fertility declines in cows at home. Last year, Texas A&M announced it received a $3 million grant to study the genetics of dairy cattle fertility. After all, it’s those cute baby calves that keep the farm going.

Check out the entire study in the journal PLOS Genetics.

*Some hard numbers for the curious: In 1960, the average American Holstein cow gave about 6,300 kilograms (13,900 pounds) of milk a year. In 2000, the average cow gave 11,800 kilograms. In 1970, the average cow needed 1.8 rounds of artificial insemination to get pregnant. In 2000, cows needed, on average, three rounds. Cows now also take longer to become fertile again after giving birth to a calf.