Engineering Lightbulbs To Keep Insects Away 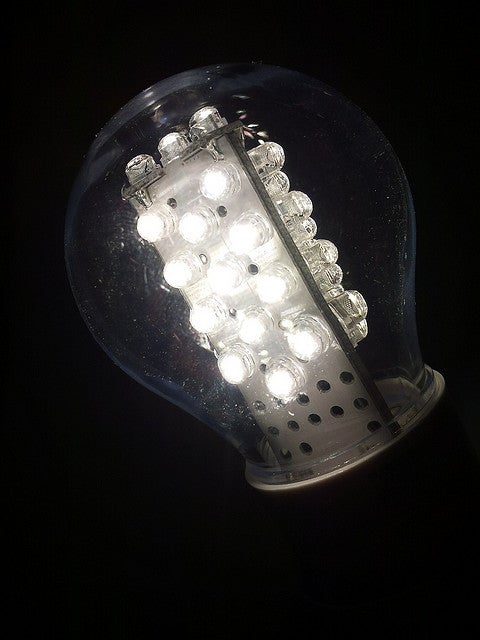 Spending long summer evenings outside comes with a big nuisance: bug bites. Mosquitos and other insects are drawn to the lights illuminating your dinner party, which helps them hone in on their human prey. While that might mean a few days of itchy welts for some of us, the implications are much more dire in other countries where bug bites can mean infection of some nasty diseases such as leishmaniasis, Chagas disease, and malaria. Now, a team of researchers is experimenting with LED lights that can ward off insects but still appear as functional white light for humans. They published their findings in the May issue of the journal Philosophical Transactions B.

While fluorescent and traditional light bulbs emit light from all parts of the visible spectrum, many energy-efficient light bulbs and electronics tend towards the blue end, which could disrupt humans’ circadian rhythm. But this blue light also draws in insects. To make light bulbs less attractive for bugs, the researchers combined LEDs of different wavelengths and turned down the blue and green light that they find most appealing. The resulting light looked white to humans and attracted about 20 percent fewer insects.

“We don’t know that this is necessarily the best configuration of wavelengths, because this is the first time that people have tried to do this,” Travis Longcore, a professor of spatial sciences at the University of Southern California, told CityLab. “What this does say is that there’s an opportunity with LEDs to make light the way you want it instead of the way the lamp has to have it.” With further testing, Longcore hopes that his team can figure out the right wavelength to keep the most insidious disease-causing insects at bay.