For science! And also for robo rescue work 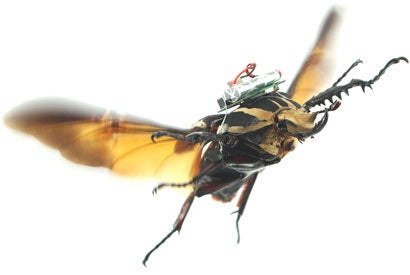 There are few better ways to answer a question than by building a cyborg to solve it. Researchers at UC Berkeley and Nanyang Technological University in Singapore wanted to know how beetles steer themselves in flight, so they did the only logical thing: strapped an electronic backpack to a giant flower beetle, let it fly, and recorded the results.

This isn’t the first time humans have remotely controlled flying beetles, but a new discovery in this study means scientists are getting better at controlling their buggy bots. The researchers found that more muscles are involved in steering the beetles’ flight than previously thought. A small muscle on the wing that scientists thought only controls wing folding is also used by the beetle to change direction mid-air. Armed with that knowledge, the team built a cyborg beetle that they were able to steer with greater precision than ever before.

To do it, they strapped a small backpack weighing 1/20th of an ounce onto the beetles, which themselves weigh about 6/20th of an ounce. The backpack contained a battery, wireless transmitter, and electrodes that connect to the beetle’s flight muscles and optic lobes. By stimulating the muscles with electrodes, the researchers were able to get more controlled turns in flight.

Remote-controlling beetles is neat enough on its own, but the researchers hope steerable beetles like this could someday be used in rescue operations where flying through narrow places would be too dangerous for humans. Between these and the cyborg cockroaches, it looks like the rescue squads of the future may be comprised of pest control workers.

Watch the flight in video below: