While Preserved for Generations, Yellowstone is Not Protected From a Changing Climate 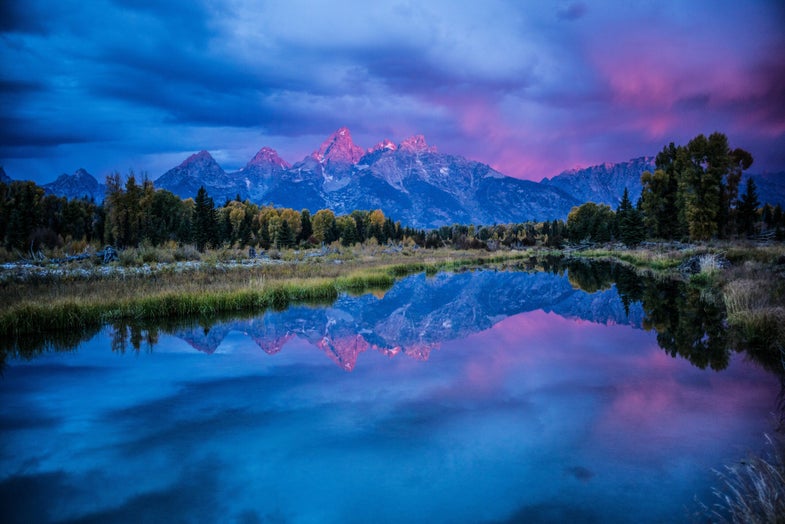 When considering how to celebrate Yellowstone and the National Parks Centennial, National Geographic reached out to award-winning writer David Quammen. The author of ten books and a columnist for Outside magazine, Rolling Stone, and other publications, he is also a longtime resident of the Yellowstone area. Quammen devoted more than two years studying the park and its surrounding ecosystem as research for National Geographic Magazine‘s May 2016 issue, and he shares the full scope of his research and story of his experiences in an accompanying book, Yellowstone: A Journey Through America’s Wild Heart. What Quammen learned was eye-opening, with profound insight for the inhabitants of a rapidly changing planet. He shared his insights in a Q+A with Nexus Media. You can read an excerpt from his book here. 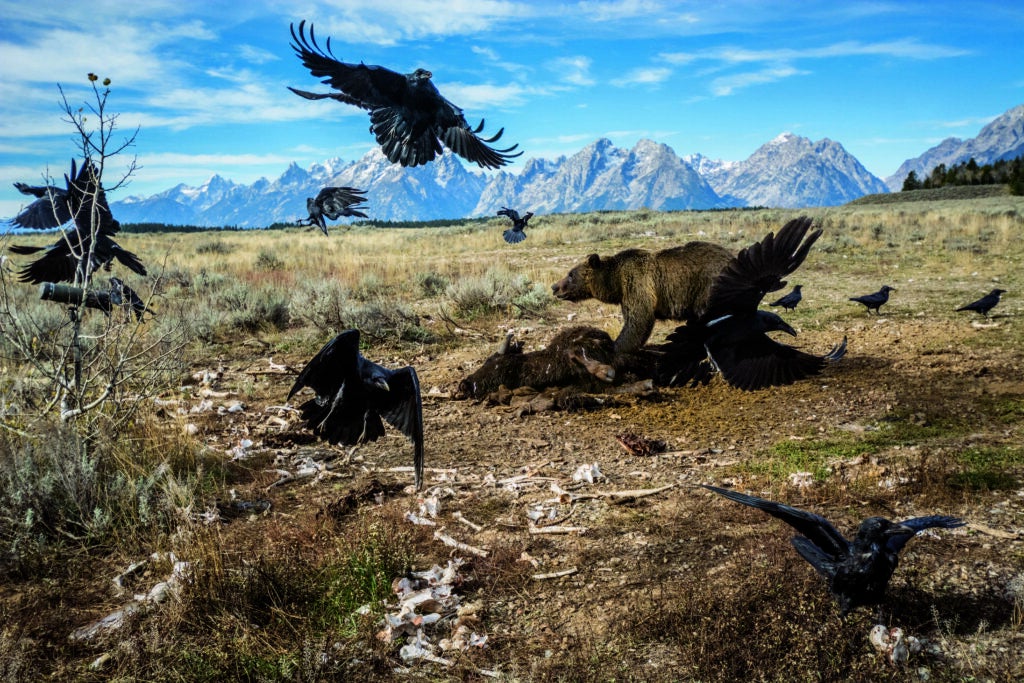 While a human presence proliferates around the world, parts of the Yellowstone region are wilder than they’ve been in a century. Grizzlies are spreading their range, for example. Here, a bear in Grand Teton National Park fends off ravens from a bison carcass dumped by rangers—a scene that’s both wild and not.

Having spent more than 30 years living within the Greater Yellowstone Ecosystem, you’ve witnessed shifts in the environment a visitor might never see. How is Yellowstone changing, in ways both hidden and impossible to miss?

Some changes have been good. The grizzly bear population has recovered considerably since the early 1970s, when it was listed as threatened. Wolves were brought back in 1995. Wonderful. Given this greater diversity and abundance of big predators, other aspects of the ecosystem have begun to swing back toward a state of richness and diversity: elk, bison, antelope, deer. But many other changes have been for the worse. Whitebark pine trees, at high elevations, an important source of high-calorie food (their nuts) for grizzlies, have been dying off from a combination of factors related to climate change and invasive species. Invasive species—in the form of the lake trout in Yellowstone Lake—have also been linked to a crash of the native cutthroat trout, another important grizzly food. Meanwhile, visitor numbers have increased drastically, which represents another sort of problem for park management. And the big private ranches that lay within the periphery of the ecosystem, serving as winter range for elk, are susceptible to changes in ownership that might lead to subdivision, and therefore, a loss of crucial habitat. The Greater Yellowstone Ecosystem is a vast resource of wild lands, but its future is still up for grabs.

As the planet warms, species are migrating at different times and to different places. How are those changes emerging in and around Yellowstone?

Climate change is important to Yellowstone, but changes in migration cycles are not the biggest issue. Bigger: How does warming affect whitebark pine? How does it affect cycles of drought that impact cutthroat trout? On the migration side: How does migration of mule deer potentially affect the arrival of a devastating disease—chronic wasting disease—in the Yellowstone ecosystem? These things are all linked. Migration is important. But migration-versus-climate-change is too simple to capture the complexities of the ecosystem.

With animals migrating away from protected areas and populations of some species, like grizzlies, exploding, conflicts are erupting that few people expected. What are some of those impacts, and how can the lessons from towns around Yellowstone guide other communities facing similar challenges?

Ranchers in Montana are terrified—or claim to be—that migrating bison coming out of Yellowstone Park will bring another disease, brucellosis, into the cattle populations of the state. But this concern is complicated—that’s putting it politely—by several facts, including that elk carry the disease pathogen as well. Elk can’t be stopped, because there are too many. They migrate out of the park through the backcountry, and hunters covet them. Bison are made the scapegoats of the brucellosis story. It’s silly and blind and futile. Killing bison at the borders doesn’t solve the problem of the bacterium Brucella abortus throughout the ecosystem.

With special anniversaries, such as the centennial of the National Park Service, the importance of the park system is on everyone’s mind. But in the intervening years, interest in preserving parks, and the recognition of their importance, fades. Why are parks important for a nation? And in a culture like ours, what will keep parks integral to the American experience, every year?

Wild lands in America are crucial to the preservation of nature and diverse natural ecosystems. Some of those wild lands—the most famous and iconic of them—are contained and defended within natural parks. This was a radical and wise idea, which began with the declaration of Yellowstone National Park in 1872, and continued with the establishment of the U.S. National Park Service in 1916, a century ago. These efforts weren’t enough to save nature in America, and Americans’ relationship with nature, but they were great symbolic acts of leadership. You can find nature in the woodlot at the end of your suburban street. That’s precious. You can also find it in Yellowstone. When you find it there, unlike at the end of your street, it will encompass grizzly bears and elk and bison and the boreal toad. These are precious facts and privileges. Life on Earth may be unique in the universe. The grizzly bear of Yellowstone is the last viable population of that great beast within the lower 48 states. When we embrace these unique treasures, we embrace things of incalculable value.

Yellowstone, despite its protection, is a true wilderness. Why should the United States keep wilds relatively untouched?

Yellowstone Park is not true wilderness. Some of it is wilderness and much of it is a playground for people—where they can drive their cars, view grizzlies by the roadside, see Old Faithful erupt and then go indoors for a hamburger and visit a flush toilet. Wilderness? Please. Get serious. What Yellowstone National Park represents is a vestige and panorama of wild-ish landscape that is available for relatively convenient experience by large numbers of the American populace. It is a window onto a wild landscape as it existed centuries ago, rich with wolves and bears and cougars and coyotes and eagles and elk and moose. It is a remnant and a representation. But there is also, even today, an opportunity to enter wilderness through the Yellowstone window. You park your car, and you start walking, with bear spray at hand—or you get on a horse—and you travel a dozen miles away from the nearest road. There: wilderness, hiding at the core of Yellowstone. Most people never see it, but it helps fuel the wonderful experience they enjoy when they visit the park.

You have also been working on a deep look into the Tree of Life. How has that research affected your view of life on Earth, and how organisms adapt to change?

My work on a book about the Tree of Life and molecular phylogenetics has shown me, among other things, that all forms of life visible on this planet are composites of other creatures, and that the history of evolution has involved genes flying sideways across “species” boundaries, as well as genes passed down from ancestors to descendants. This is radically different from what most people—even most biologists—think they know about the history of life on Earth.

Yellowstone is a microcosm of diversity – so many environments, plants and animals influencing each other. You recently wrote about connections among grizzlies, elk, wolves and earthworms at Heart Lake and the nature of Yellowstone as an “island” ecosystem – how is that ecosystem being stressed?

The elk at Heart Lake lived a relatively comfortable life, free of winter predation and enjoying the warms springs, until wolves were reintroduced in 1995. Some of them died of winter stress, and grizzlies from the area scavenged those carcasses in spring. But wolves, after their reintroduction to the park in 1995, quickly found the elk of Heart Lake, and drove them away from their winter refuge. That left the grizzlies without carcasses to scavenge in spring. The grizzlies, adaptable, have now turned to eating earthworms in spring, among other items. The earthworms are exotic species, brought from Europe in the last three centuries. So you have irony: invasive earthworms have helped allow native grizzles adapt to the ramifications of native wolves being returned to the ecosystem. Moral: Ecology is more complicated than people are smart.