Did it stay or did it go? 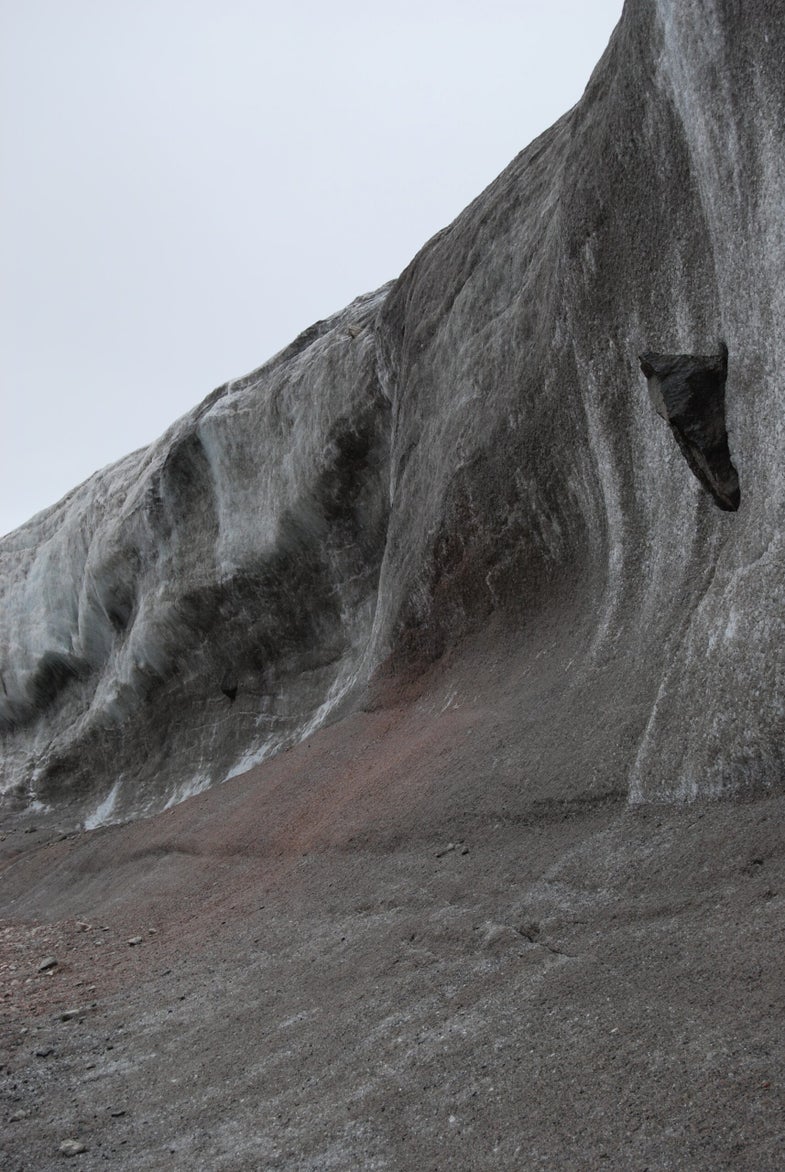 Eighty percent of Greenland is covered by a wall of ice thousands of feet thick. If the wall melted completely, the water it contains would be enough to raise sea levels by over 20 feet.

Greenland’s ice has grown and shrunk over time, driven by variations in the climate, but mapping out the history of those changes is a remarkably difficult task. The deeper that researchers dig into Greenland’s past, the more tangled the icy narrative becomes.

Two new studies published today in Nature illustrate the complexity that faces scientists studying changes to the Greenland ice sheet. One study led by Joerg Schaefer finds that Greenland was almost entirely ice free for extended periods of time during the last 2.6 million years. The other study, led by Paul Bierman, finds that there has been a stable ice sheet over East Greenland for the past 7.5 million years.

Taken at face value, the results would seem best suited for a scientific showdown, with contrasting findings leading to an epic Battle Royale fought with data sets and fieldwork over the next several years.

But sorry, you’d better put away the folding chairs and dueling dissertations. That’s one matchup that is not gonna happen.

The reality is far more nuanced. And while the results appear to differ greatly, they actually aren’t as disparate as their conclusions might lead you to believe. 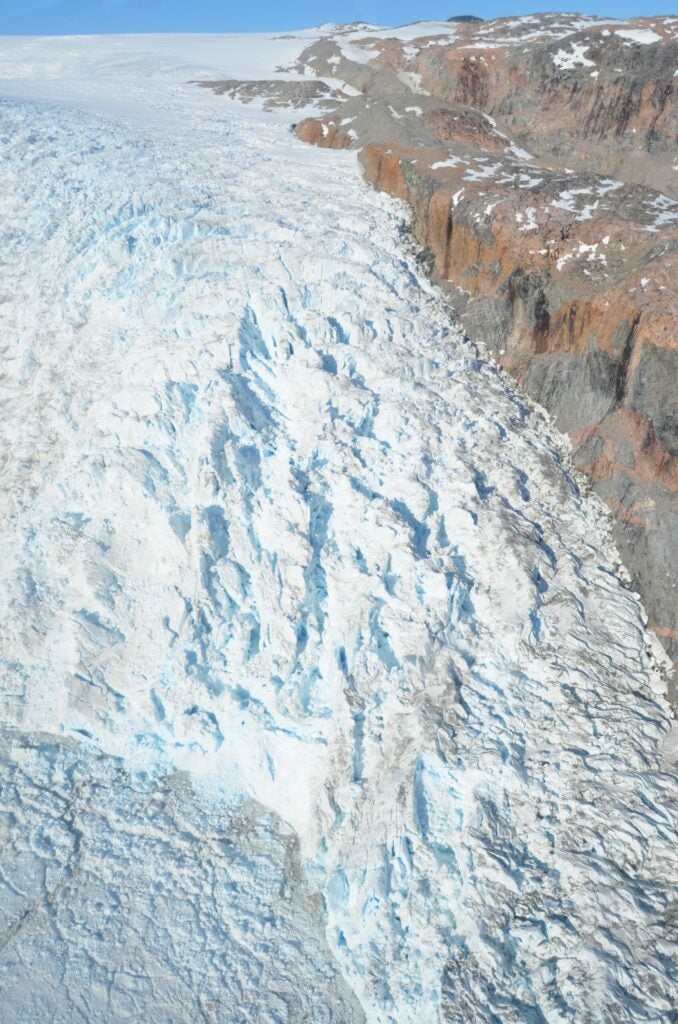 “It’s kind of an awkward situation. Scientifically, it’s fascinating and cutting edge and we are happy and proud of what we have done in that respect. But the message really is somber, and I wished the story would have been different,” Schaefer says.

Schaefer examined rock cores that had been drilled from under the ice sheet in 1993, looking for a set of isotopes called cosmogenic nuclides that would indicate that the rock had been released from its icy prison at some point in the past.

Cosmic rays are streams of atomic fragments (mostly protons) that bombard the Earth constantly from all directions. When rock is exposed to these cosmic rays, the protons slamming into the rocks’ atomic structure can generate the isotopes beryllium-10 and aluminum-26, the cosmogenic nuclides that Schaefer was looking for.

Cosmic rays can only travel through a very small fraction of the Earth’s crust. Ice sheets can act as shields, preventing the cosmic rays from interacting with the bedrock. Greenland’s ice sheet is over 9,000 feet thick in places, much too thick for the cosmic rays to pass through.

But Schaefer found cosmogenic nuclides in the bedrock, indicating it had been exposed at some point in the relatively recent past. The specific timing of this exposure is still uncertain. In the most stable scenario, Greenland was nearly ice-free for 280,000 years, before it started freezing over again about 1.1 million years ago. But the data collected by Schaefer and colleagues could also indicate that the ice sheet melted and refroze more than once over the past few million years, which might mean the ice sheet is far less stable than previously assumed.

“It is certainly surprising,” Schaefer says of his results. “Most importantly, there is not a single model that can show that Greenland’s ice sheet has been gone several times over the past few million years or for one period over that time”

The fact that the current models used by glaciologists appear to be too stable and conservative could be bad news for future estimates of ice loss and sea level rise, which rely on models of what happened in the past to figure out what will happen in the future.

“It’s a big day for beryllium,” Schaefer laughs, noting that Bierman et al’s study also used trace amounts of the isotopes to get to their conclusions.

Instead of looking at cores of bedrock from under the ice, Bierman and colleagues looked at records of sediments carried off Greenland by icebergs–sediment cores taken during the early 1990’s over 100 kilometers off the southeastern coast.

“If there’s a lot of sand and gravel in these cores, that must meant that there were a lot of icebergs floating offshore. And the only way to get icebergs offshore is if you have glaciers on the land,” Bierman says.

Bierman isolated beryllium-10 in the core samples and found that the concentration of the isotope dropped over time. That suggests that there was a near-constant ice cover over the land during the 7.5 million year period he and his team studied.

But there are limitations to the findings. Bierman’s study looks at averages over long periods of time. Really, really long periods of time. “If the ice sheet disappeared for thousands of years, we probably wouldn’t see it,” Bierman notes. “We can’t see short term changes, but we can see the long-term overall trend.”

So how to reconcile the two conclusions? Both Schaefer and Beirman say that it isn’t that hard to do. The seemingly-disparate results probably just indicate how much more study is needed to uncover the whole truth. “It’s like the parable of the blind person and the elephant, we each know our little pieces of this but we don’t have the whole picture figured out,” Bierman says.

“The most important thing is we now have two important interesting sets of data that we didn’t have a week ago,” Bierman says. “It’s going to take some time to figure out not only the best fit between our two studies, but all the other studies. We need to come up with an explanation that doesn’t just fit one or two studies, but everything we know about Greenland.” 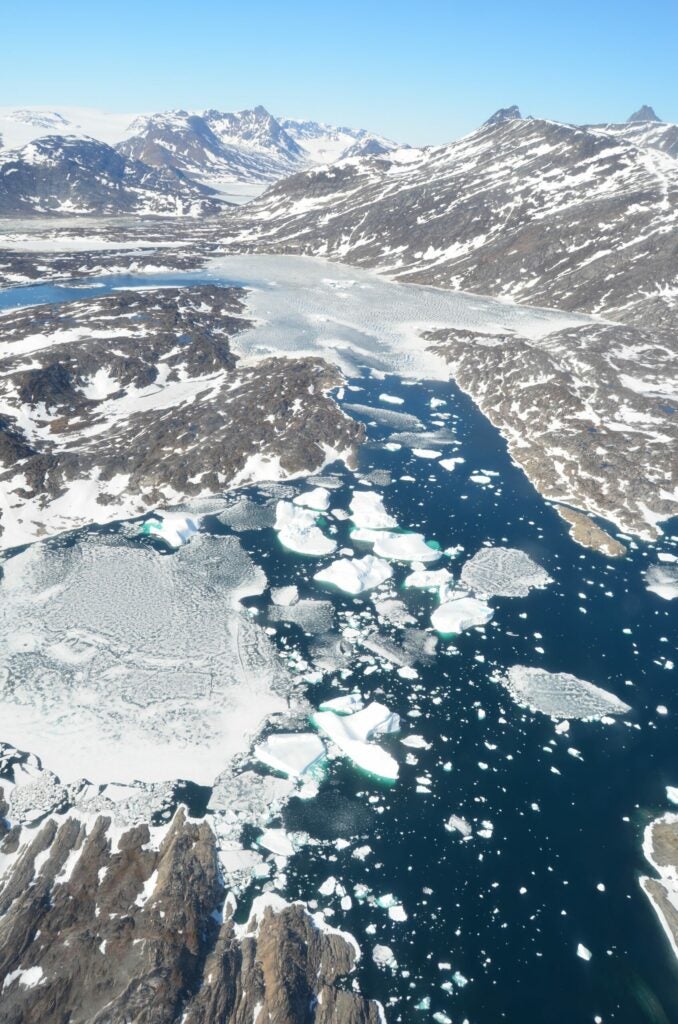 Icebergs float in a Greenland Fjord in June.

“One of the hopes is that with this study we show that bedrock underneath ice sheets is an untapped climate archive,” Schaefer says.

There are tools currently in development that could drill through the ice quickly, melting it in the process for the express purpose of sampling the bedrock below. Schaefer hopes that future studies will focus on collecting these bedrock samples, which researchers can use to get a clearer picture of our climate history from other areas in Greenland and Antarctica. Bierman is planning on studying sediments from off the coast of other areas of Greenland, also hoping to get a more detailed picture of that island’s climate history.

“Both of these studies are science that will be important pieces to understand how the ice sheet will behave. They themselves do not predict what’s going to happen, but they’re part of a bigger picture of understanding how a complex system behaves over time,” Bierman says.

Understanding how the Greenland ice sheet functioned in the past could help us better understand how it could behave in the future, particularly as the climate warms. With the human limitation of a short life span and the utter lack of a time machine, conceptual and numerical models of how the ice sheet behaves are the only way that climate scientists can understand how these massive hunks of ice change over thousands and millions of years. Or, in our current situation, how they might change over the next few centuries.

“We’re facing a climate that you can deny all you want, but the data shows it is getting warmer. There is zero debate in the scientific community that if it’s going to get warmer, Greenland is going to melt. And sitting in Greenland are the equivalent of seven meters (23 feet) of sea level rise,” Bierman says. “I don’t think this is a trivial problem by any means. We need to understand how the Greenland ice sheet functions over time because it is the best way we’re going to figure out what’s going to happen in the future as we tweak our climate.”

Schaefer agrees. “What we are doing in the moment [with climate change] is so much faster and so much stronger than the natural forces that I just don’t think it is reasonable to expect us to keep the Greenland ice sheet,” Schaefer says. “This not to steer panic or something, it just is what it is. We have to prepare for these higher sea level scenarios.”

“It’s just idiotic not to plan for this,” Schaffer adds. “It will already be extremely expensive to mitigate and adapt to that [rising sea levels]. It would be a complete and unmitigated disaster if it hit us unprepared, and it would throw the United States behind countries that do plan ahead.”

But if the United States is going to keep from falling behind, it needs to start preparing now. And that means gathering all the data it can about the past to get a clearer picture of what’s waiting for us down the road.