Meet The Scientist Who Might End The Climate Culture Wars 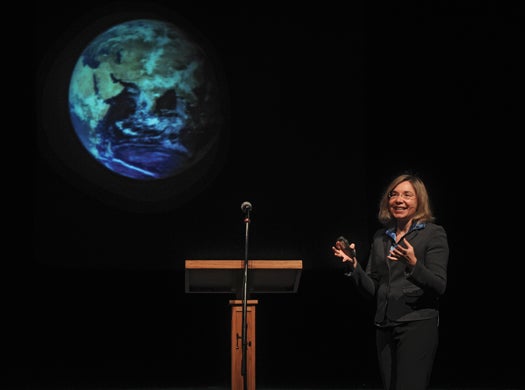 Katharine Hayhoe, an atmospheric scientist, wrote a chapter on climate change for Newt Gingrich's forthcoming book, only to have it pulled after the politician hit the campaign trail. AP Photo/Nellie Doneva
SHARE

This is only the fourth time AGU has given an award for climate communication. Past winners include Kevin Trenberth and Jeffrey Kiehl, both of the National Center for Atmospheric Research; and Gavin Schmidt, co-founder of RealClimate (long the go-to blog for climate science) and very lately director of the NASA Goddard Institute for Space Studies.

Hayhoe’s professional credentials are equally fierce. She is the director of the Texas Tech office of the South Central Climate Science Center, a regional research hub supported by the federal government. She has worked on assessment reports with the Intergovernmental Panel on Climate Change. Hayhoe speaks with resource professionals, such as water managers, on preparing city and regional infrastructure to increased heat or drought, and other impacts of the destabilized climate. Hayhoe’s name appears on a healthy number of scientific publications, which have been cited by other researchers over 5,700 times. (She also chats it up with journalists; I first met her at the Society of Environmental Journalism’s 2012 conference in Lubbock, Texas.)

Whenever it was that climate change denial first joined hands with evangelical Christianity, their union became mainstream national news in 2007. That was the year over two dozen evangelical leaders tried to oust Rev. Richard Cizik from his role as chief lobbyist for the powerful National Association of Evangelicals, over his “relentless” efforts to get evangelicals to act to stop global warming. (That was the same year that Rev. Jerry Falwell termed global warming “Satan’s attempt to redirect the church’s primary focus” away from evangelism and towards environmentalism, a movement peopled by “first-class nuts.”) Cizik wasn’t officially ousted from the NAE until 2008 when he also began speaking out in support of same-sex civil unions.

Now, six years later, the NAE’s website features an excerpt from Genesis 2:15 about God’s creation — “watch over and care for it” — as support for “the principle of sustainability: our uses of the Earth must be designed to conserve and renew the Earth rather than to deplete or destroy it.” There are links out to information on retrofitting your church for energy conservation; poverty and climate change; resources for starting a “creation care Bible study or action group”; and more. Nothing explicit about science, but it seems like something has shifted.

Hayhoe’s work may be among the reasons why. In 2009, less than a year after Cizik was ousted from NAE, Hayhoe and husband Andrew Farley (a religious scholar and evangelical minister) co-authored A Climate for Change. The book explains climate science in ways that reflect conservative Christian beliefs rather than antagonizing them.

In an interview earlier this year, Hayhoe told me how the book led to word-of-mouth referrals from co-religionists, resulting in more invitations to speak at churches, Christian colleges, and other conservative groups that, she thought, would not typically invite a scientist from a public university to come talk about global warming. It’s work she continues to do, as evidenced in her recent appearance in the climate change documentary, “Years of Living Dangerously.”

Hayhoe says there are sometimes hardcore deniers in these audiences, not there to listen but to argue. “It would take an act of God to change their minds,” she says dryly. But Hayhoe finds mostly that because she can convey the scientific facts without dismissing or violating their conservative Christian values, these audiences mostly react to her presentation by asking what they can do. And that’s good news for all of us, whatever our position on faith.

Note: We omitted Jeffrey Kiehl from the list of past AGU climate communicator award winners in an earlier version of this article, and regret the error.