No matter how cute sea otters are when they hold hands. 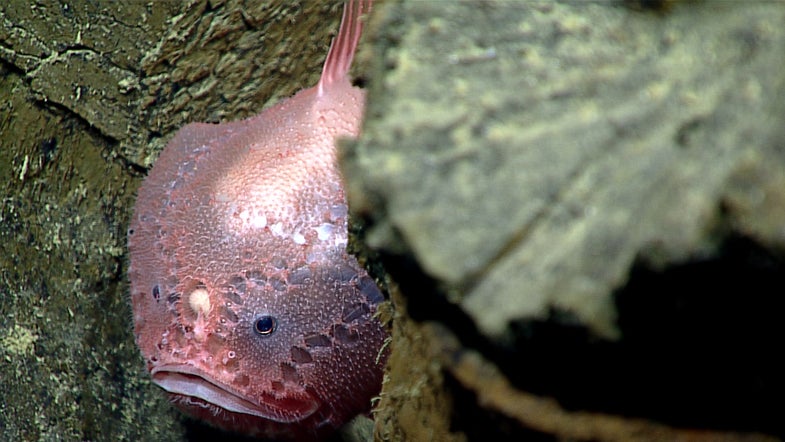 You may have seen recently some footage of an anglerfish pair mating—the first ever video of such a feat. The male suckles at the female, clinging to her body and slowly melding into her over time. She takes his sperm and nutrients until he’s nothing more than a shell of his former self—literally. Once he’s all empty inside, he just kind of dissolves into his lady (along with many other males, because female anglerfish aren’t picky).

Anglerfish are not the only example of terrible relationship dynamics in the animal kingdom. We all know that it’s unhealthy to give your whole self over to the person you love, even if your body does help keep them going. But what about sea otters? They’re so cute! If only we could take a page out of their book and learn how to happily float in the ocean together.

Just kidding. This is Popular Science. We are not here to reinforce your common misconceptions. We’re here to shatter your illusions. Buckle up, partner: It’s time for some hard truths.

We’ve alluded to this one already, so let’s get it out of the way first. Sea otters do indeed clasp paws while they sleep in order to not float away from each other. Unfortunately, they do not do so because they’re just so in love that they don’t want to be separated. Male sea otters have multiple female partners and typically only spend a few days with each one, based on when each lady is fertile. That’s not so bad. But when they get down to business, the male “holds the female’s head or nose with his jaws,” often scarring the lady forever with his teeth. Later she’ll give birth to a single pup and will fulfill all parental duties, while her mate goes off to do it all over again with someone new. Also, male southern sea otters occasionally rape young harbor seals to death, apparently just for fun. Not so cute now, are they?

Phoebe from Friends lead you wrong in a lot of ways (sorry, but part-time masseuses slash coffee-shop singers can’t afford to live alone in the West Village), but her main scientific error was in telling viewers that lobsters mate for life. They do not. They have a kind of crustacean spring break, in which lady lobsters wait their turn for a brief fling with whichever local male has proven dominant. The female lobster does at least have some control over the situation, since it’s she who seduces him, but it’s still basically a “reproductive conga line,” as Mental Floss so poetically put it.

A timid little male spider bringing a lady some deliciously wrapped treats sounds adorable. We should all be so lucky as to have a partner who brings us food they know we like just because they love us. And it is quite cute—until you learn that the only real goal here is for the male to mate with the female spider before she eats him. He sometimes just makes a fake present with nothing inside—or worse, wraps the gift, but gets hungry on the way and eats it himself—just so he can have sex. Maybe that’s why the female spider eats him.

Male bowerbirds famously build little shrines—called bowers—to entice females to come mate with them. They fill the bowers with shiny things and hop around trying to display their goods as best they can. For some reason we have decided this is cute, but let’s think about it for a second. You don’t want to end up with the dude who brings you back to his apartment to show you his sick stereo system or insists on driving you home so you can sit in his Porsche. Find you a mate who you like as a person, not for their stuff. And stop anthropomorphizing birds.

No PopSci animal mating article would be complete without a little giraffe sex. Though you can buy a million different “giraffe heart” necklaces on Etsy, showing two giraffes lovingly forming a heart with their necks, real giraffes have terrible sex lives. They don’t mate so much as the male follows the female around with a raging erection and she repeatedly tries to walk away, until he mounts her suddenly and finishes in three seconds. It’s mostly older male giraffes doing the mating, too, and they prefer young females. Then she’s pregnant for over a year. Just something to consider before buying your partner a cute necklace.

BONUS: the animal you should actually base your relationship on

Surprise! It’s the albatross. These birds take ages to reach sexual maturity and even longer to start breeding, allowing for plenty of time to practice their mating dance, which they learn by watching older birds court each other. Young albatrosses dance with several partners, testing out various pairings, but eventually choose just one partner to dance with forever. They literally have their own special dance that they only do with each other, and then they settle down into a little family for life. It seems that all this effort up front occurs because albatrosses have so few young, and take a long time to raise them. It’s a huge effort, so you want to be sure you pick the right bird. Sometimes they get bird-divorced, but only if they’ve tried to have chicks several years in a row and can’t seem to make it work. Also the young ones are so fluffy it hurts. Long live the albatross.