These critically endangered albatrosses are being plagued by mice

Gough Island’s Tristan albatrosses are in even more peril than scientists thought. 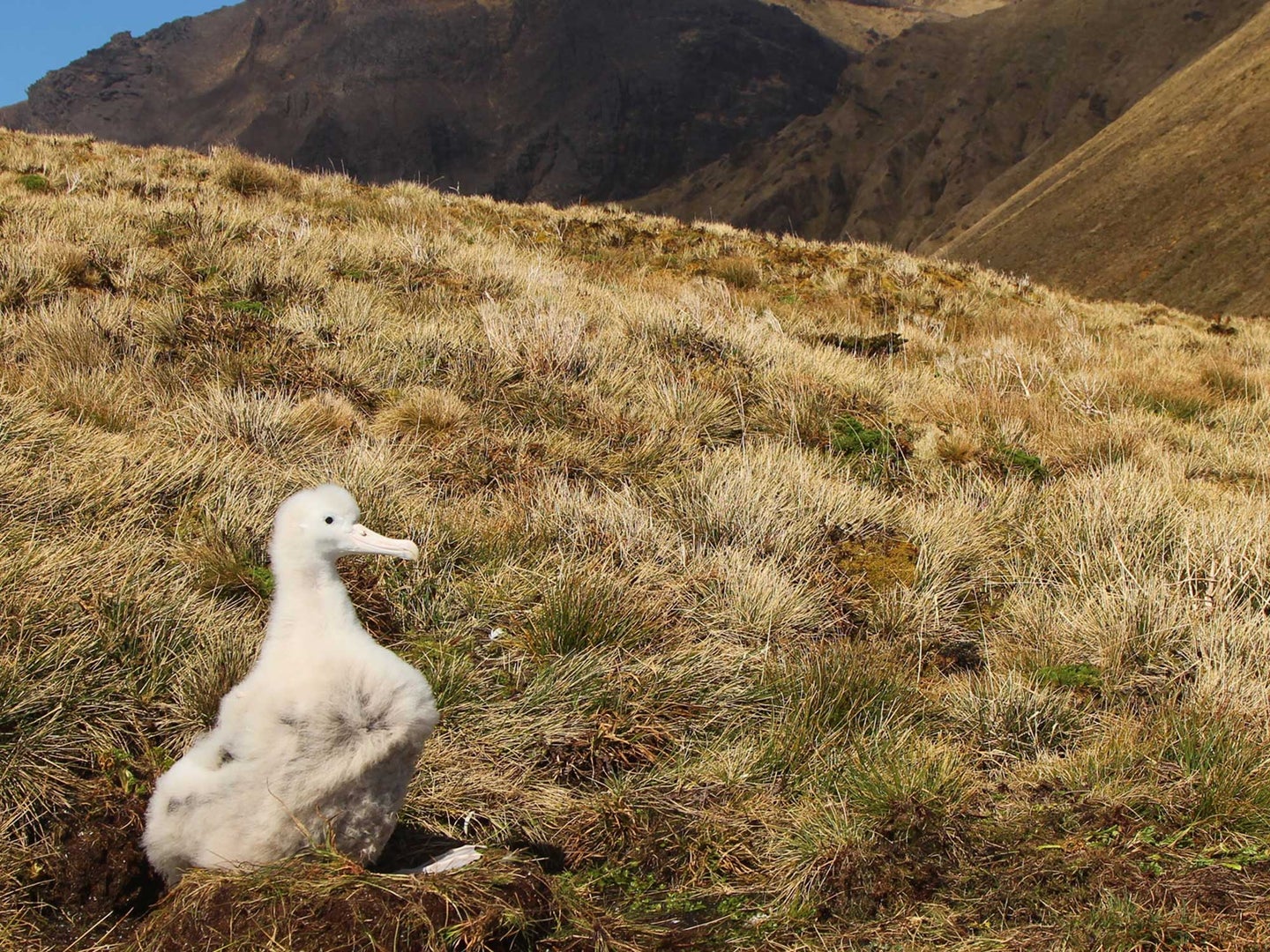 Steffen Oppel remembers his first close encounter with a Tristan albatross. It was a calm day on Gough Island, a tiny British overseas territory in the South Atlantic halfway between South Africa and Argentina. The birds looked funny, he thought, waddling up a small hill then running down again. That is, until one of the birds spread its massive wings and caught the wind. “They have such an enormous wingspan, and they’re so supremely adapted to flying,” he says.

Oppel, a conservation scientist with the United Kingdom’s Royal Society for the Protection of Birds, visited Gough Island in 2018 as part of a team trying to save the Tristan albatross and the 21 other seabird species that live and breed there.

Two hundred years ago, mice came ashore alongside seal hunters. As the mouse population exploded, they outstripped their supply of seeds and insects. Some started eating seabird chicks. Some even began attacking adult birds—creatures hundreds of times their size.

Last year, conservationists made a bid to finally eliminate the invaders. Using helicopters, they dropped poisoned mouse bait all over the island. But their goal of wiping out all of the mice on Gough Island failed. Live mice were spotted soon afterward.

“We were all absolutely devastated,” Oppel says. Camera traps and other detection devices set by the researchers show the mice are once again multiplying and spreading across the island.

Throughout the drama, conservationists were surprised that, despite the mice’s attacks, the albatross breeding population was not suffering too badly. According to estimates, Gough Island’s population of nesting Tristan albatrosses has remained stable since 2004, at around 1,500 pairs per year.

But that stability, Oppel and his colleagues show in a new study, is an illusion. In their paper, the scientists show that Gough Island’s Tristan albatrosses have been suffering a cryptic decline. The birds’ situation has been growing ever more precarious, but because of the way ecologists working on Gough Island estimate population sizes—by counting the number of birds sitting on nests—that instability wasn’t showing up in the data.

Using a complex demographic model that takes into account the birds that are away at sea, which for Tristan albatrosses is roughly 70 to 75 percent of the population at any given time, Oppel and his colleagues now think that the bird’s total population actually declined from 9,795 birds to 7,752 between 2004 and 2021. And it is the mice’s fault.

According to Oppel, the mice have been eating away at the albatrosses’ ability to recruit new members into the breeding population. Though the number of breeding pairs has been relatively stable, those birds are growing older and new chicks are not surviving to adulthood. “There are simply not enough young birds coming through,” says Oppel.

That makes the future of Gough Island’s Tristan albatrosses even more dire. It also raises the stakes on what comes next.

Despite its failure to fully wipe out the island’s mice, the attempted eradication still gave the birds some respite, Oppel says. Unless numbers grow so rapidly that the mice once more exhaust their preferred food, the attacks on seabirds won’t resume immediately. After all, he says, it’s desperation that drives the tiny mammals to start nibbling giant birds armed with formidable bills.

“We have at least bought the seabirds on Gough a time window,” he says.

Andrea Angel is the manager of BirdLife South Africa’s Albatross Task Force. While visiting Gough Island in 2003–2004, Angel, along with her colleague Ross Wanless, filmed the first video evidence of mice attacking Tristan albatross chicks. Though she’s not involved with the mouse eradication project, Angel supports it. “Seeing it fail was an unspeakable disappointment,” she says.

Like Oppel, Angel believes that effort has dramatically reduced the number of mice. It brought the birds, and the island’s unique plant and insect life, a break.

This is already evident, she says, in the breeding success of some of Gough’s other seabirds this year. The MacGillivray’s prion and the gray petrel, for instance, have had higher breeding success this year than any time since 2014, when record-keeping began. This is a sharp change, Angel says. Back in 2004, she and her colleagues searched the island for gray petrel nests. They only found one chick.

It’s still too early to say whether the Tristan albatrosses are also seeing a boost to the number of young they raise. But so far, conservationists have yet to see evidence of a single mouse attack on an albatross chick. It’s a silver lining, Oppel says, and a sign that mouse eradication could give the birds the breeding success they were assumed to have.

After the failure last year, the team is now trying to understand how to improve the chances of success for future eradication attempts. It’s a process that could take several years, Oppel says: first, they need to understand what went wrong, and why some mice may not have eaten the bait.

“We need to change something; we cannot go there and do the same thing again and hope for a better outcome.”