The longest species of snakes that slither the planet

Pythons the size of telephone poles, boas the length of school buses, and a 12-foot pit viper named “Silent Death.” 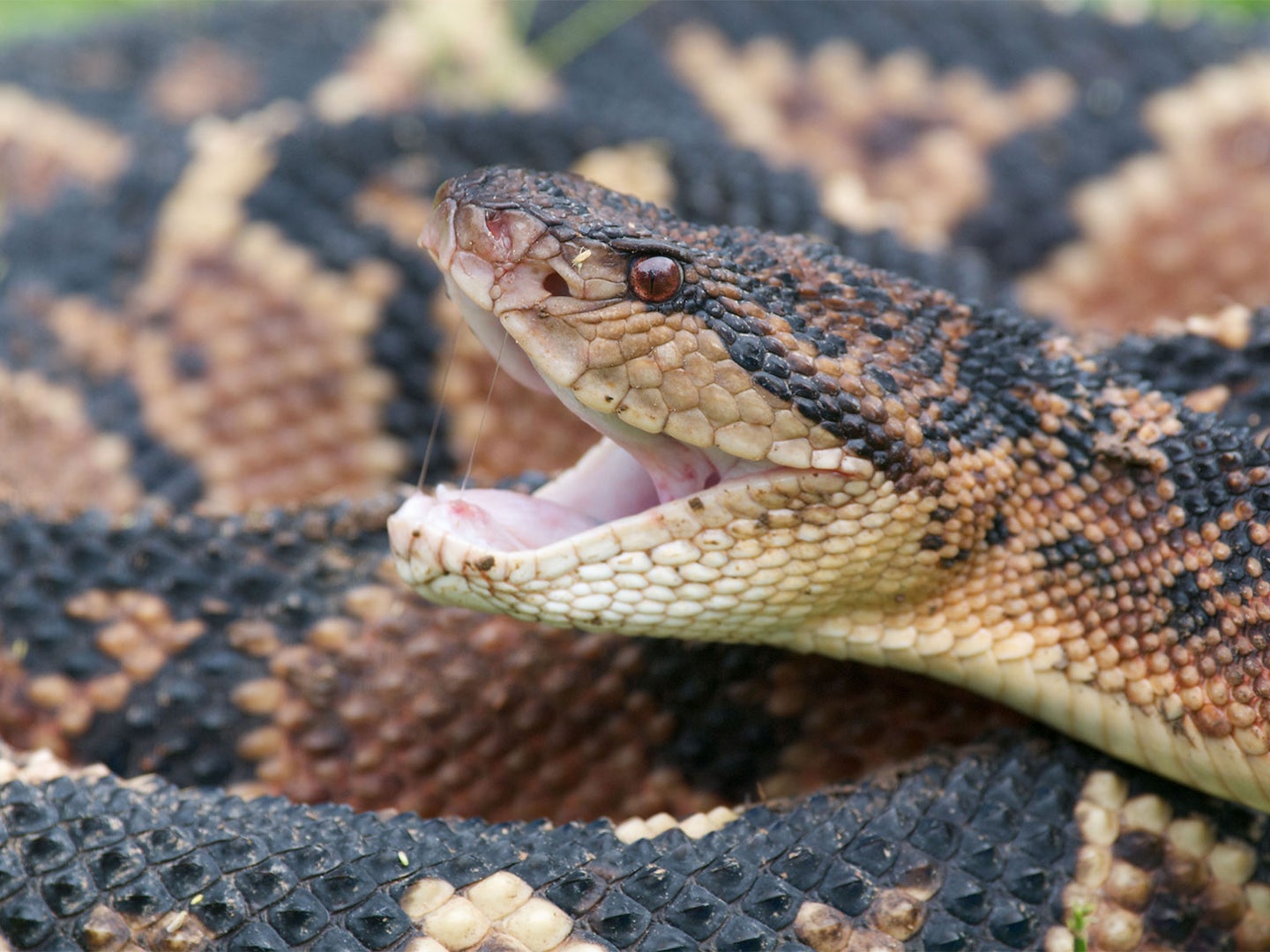 Bushmasters are the largest venomous snakes in the Americas. John Sullivan/Alamy
SHARE

Pretty much all of the really impressive “biggest snakes in the world”—the 50-footers and up—live online or in Hollywood. (Many of the latter starred in the 1982 Arnold Schwarzenegger breakthrough hit Conan the Barbarian and are retired now.) But even in the real world, a handful of snake species can grow to immense proportions. The longest of them, pythons, can stretch well beyond the length of George Washington’s 21-foot nose on Mount Rushmore, and there is anecdotal evidence of some specimens reaching 33 feet, or nearly as long as a telephone pole. In 2017, the body of a palm fruit farmer in Indonesia was found inside a 23-foot-long python. Villagers became suspicious when they found the snake “slithering awkwardly” near where the farmer’s boot was found. There was also the man-sized bulge in the snake’s body.

What follows isn’t a strict rundown of the largest snakes ever recorded, as that would mostly involve pythons of slightly different lengths. Instead, here are the world’s largest snake species, along with a few individual specimens that are just too impressive to leave out.

Anacondas get all the press about being the biggest snakes because they are in terms of weight (see below). But the longest documented living snake is a reticulated python named Medusa, who resides at The Edge of Hell Haunted House in Kansas City. Medusa is 25 feet, 2 inches long and weighs 350 pounds. When it’s “show time,” Medusa will stay completely still for the entire haunted-house performance. She is fed a small deer every other week or so. A python, like Medusa, bites its prey and then swallows it whole. There is an alleged record of 32-foot, 10-inch reticulated python that was shot in 1912. But, like most long snake records, this one is hard to nail down. Snake stories, it seems, are a lot like fish stories.

Green anacondas are the biggest of their kind, reaching lengths of 30 feet and weighing up to 500 pounds. There is a news clipping from 2016 about a 33-foot anaconda in Brazil, but it hasn’t been independently confirmed. Anacondas are a great reason not to go swimming in South America, since that’s where they live and they are primarily water snakes. Their immense weight makes them cumbersome on land, but they’re incredibly stealthy in the water, lying motionless until their prey comes into range. They have been known to eat whole jaguars. That would make an awesome YouTube video, but I looked for three hours and couldn’t find one. So, here’s a video of some anacondas and alligators. As with most snakes, female anacondas are bigger than the males. Eggs hatch inside the snake’s body, so they give birth to live babies. The mother, who goes without food for the seven-month gestation period, eats the babies that do not survive birth. Snakes have never been known for being sentimental.

Python’s were first seen in the Florida Everglades in the 1990s, and now nobody really knows how many of them there are. We do know that the majority of them are Burmese pythons, a favorite of pet owners. What happens when a pet snake escapes or gets too big to keep and the owner doesn’t have the heart to kill it? It finds its way to the Everglades and nearby swampy areas, where it joins a population that has nearly wiped out some species of mammals and reptiles. The longest such snake caught to date measured 18 feet, 8 inches. But the heaviest Florida python was a Burmese killed in 2012 that weighed 164-½ pounds and measured 17 feet, 7 inches. That snake had 87 eggs inside it. The Florida Fish and Wildlife Conservation Commission (FWC) Python Action Team has now removed 900 Burmese pythons from the wild in Florida. But with high-end estimates of the python population in Florida at 300,000, that’s just a drop in the bucket.

One snake that’s easy to remember is the fer-de-lance or bushmaster, whose Latin name has been translated as “Silent Death.” It’s the largest venomous snake in the Americas, occasionally reaching 12 feet. Bushmasters are known for their coffin-shaped head, which is apt because it’s deadly. The bushmaster is often described as aggressive, excitable, and unpredictable when disturbed. Like most snakes, it prefers to flee from danger. But if bothered, it will suddenly reverse course and envenomate you with some very nasty chemicals. The bushmaster is a pit viper, which means it uses heat-sensing pits on each side of its head as infrared sensors. Basically, they see the world the way we do with the addition of the infrared spectrum—kind of like the Terminator. In the state of Lara, Venezuela, it is responsible for 78 percent of all fatal snakebites.

The biggest snake that ever existed—that we know of, anyway—was Titanoboa. (Get it?) The snake lived 60 million years ago, just 6 million years after Tyrannasaurus Rex departed the scene. Fossilized remains of a serpent 42 feet long—that’s as long as the largest school buses—and weighing an estimated 2,500 pounds were discovered in coal-mining pits in Colombia. Scientists believe that Titanoboa was the apex predator of its time and acted very much like a super-sized anaconda, spending most of its time in the water. It constricted its prey and consumed it whole. Its jaw structure and many teeth suggest that it was adept at catching fish, but it probably also fed on 12-foot crocodiles and turtles 5 feet in diameter. Some scientists point to the snake’s size as an indicator of a tropical climate warmer than has been previously thought. They reason that no cold-blooded animal that size would have had the resources to regulate its body temperature and survive in a climate absent mean temperatures in the 90s.

The longest snake in North America is the eastern indigo, which is a kind of black snake that lives in coastal Georgia, Florida, Alabama, and Mississippi, a region that is undergoing rapid condo-ization. The longest Eastern indigo on record measured 9.2 feet, but the species may not be around much longer. It is listed as federally threatened in Florida and Georgia. The Alabama Department of Conservation and Natural Resources lists the snake as possibly extirpated. When threatened, the indigo can flatten its necks to look bigger—like they’re not already big enough. One survival mechanism this snake does have up its, er, sleeve, however, is that it’s immune to the venom of the rattler, cottonmouth, and copperhead.

For big, scary snakes, the Eastern diamondback rattler is one of your better contenders. It’s often considered the most dangerous venomous snake in North America. Guinness World Records doesn’t have a single listing for “heaviest poisonous snake” but ventures that the Eastern diamondback is “probably” the one. A specimen shot in 1946 measured 7 feet, 8 inches. Perhaps even more terrifying is that it weighed 34 pounds. That’s just way too much rattlesnake. Picture a musclebound fullback that shoots venom through its teeth and you’ve basically got a big diamondback. Also, it has a double-action venom, which, according to one source, contains “a thrombin-like enzyme crotalase, capable of clotting fibrinogen, leading to the secondary activation of plasminogen from endothelial cells.” I have no idea what that is, but I don’t like the sound of it one bit. The Eastern diamondback has the longest fangs of any rattlesnake, at up to an inch. And it can inject enough venom to kill three men.

The black mamba is the longest venomous snake in Africa and the second longest in the world. The largest reported mamba was 14.6 feet, although they are more commonly about 8 to 10 feet long. The black mamba has several things going for it in the nastiness index. It hunts both on the ground and in trees, so there’s always the prospect of being struck in the eyeball. Its venom is a daiquiri of neurotoxins that induce painful symptoms within 10 minutes and can be fatal within 20. It’s a sprinter, capable of reaching speeds of 12 miles per hour. It’s a nervous snake and, when threatened, extremely aggressive. Because of these factors, it’s widely considered the world’s deadliest snake. Nevertheless, many citations insist that it’s a shy snake that wants to avoid you unless it feels threatened. Personally, I don’t trust this. If you don’t think it feels threatened but the snake decides it does anyway, guess whose opinion counts for more.

Not to be confused with the malt liquor of the same name, the King Cobra is the world’s longest venomous snake, period, growing up to 18 feet. That’s three of me. When confronted, it can “stand up,” lifting a third of its length off the ground, and still propel itself forward to attack. Native to the forests of Southeast Asia, this thing makes you want to think twice before going for a hike. Like Mike Tyson, it is shy and retiring right up until it isn’t. It’s the only snake in the world that builds a nest for its eggs, which it guards “ferociously.” The good news, relatively speaking, is that king cobra venom is not particularly potent, as these things go. The bad is that they can deliver so much of it in a single bite—up to nearly half a fluid ounce—that there’s enough of it to kill 20 people. Or, as occasionally happens, an elephant. For some reason snake charmers like king cobras. But snake charming is a sad business when you know how it’s done. They use an exhausted animal which is conditioned— through pain—not to strike the charmer.

One thing I’ve learned while researching this story is that you want to avoid any venomous snake with the word “king” in its name. Another Australian native, the king brown is actually a member of the black snake family. The longest on record was 11 feet, although most average 6 to 8. There are more venomous snakes in Australia, but the king brown makes up for this with a savage bite and a habit of chewing on its prey as it injects large quantities of venom. The venom breaks down blood cells, damages muscle tissue, and is mildly neurotoxic. On the whole, you don’t feel very well. Should antivenin be required, make sure to request black snake antivenin, which works much better than that for brown snakes. This is the only venomous snake here that is not listed as placid unless provoked. Which probably means it’s crazy and bad-tempered all the time.