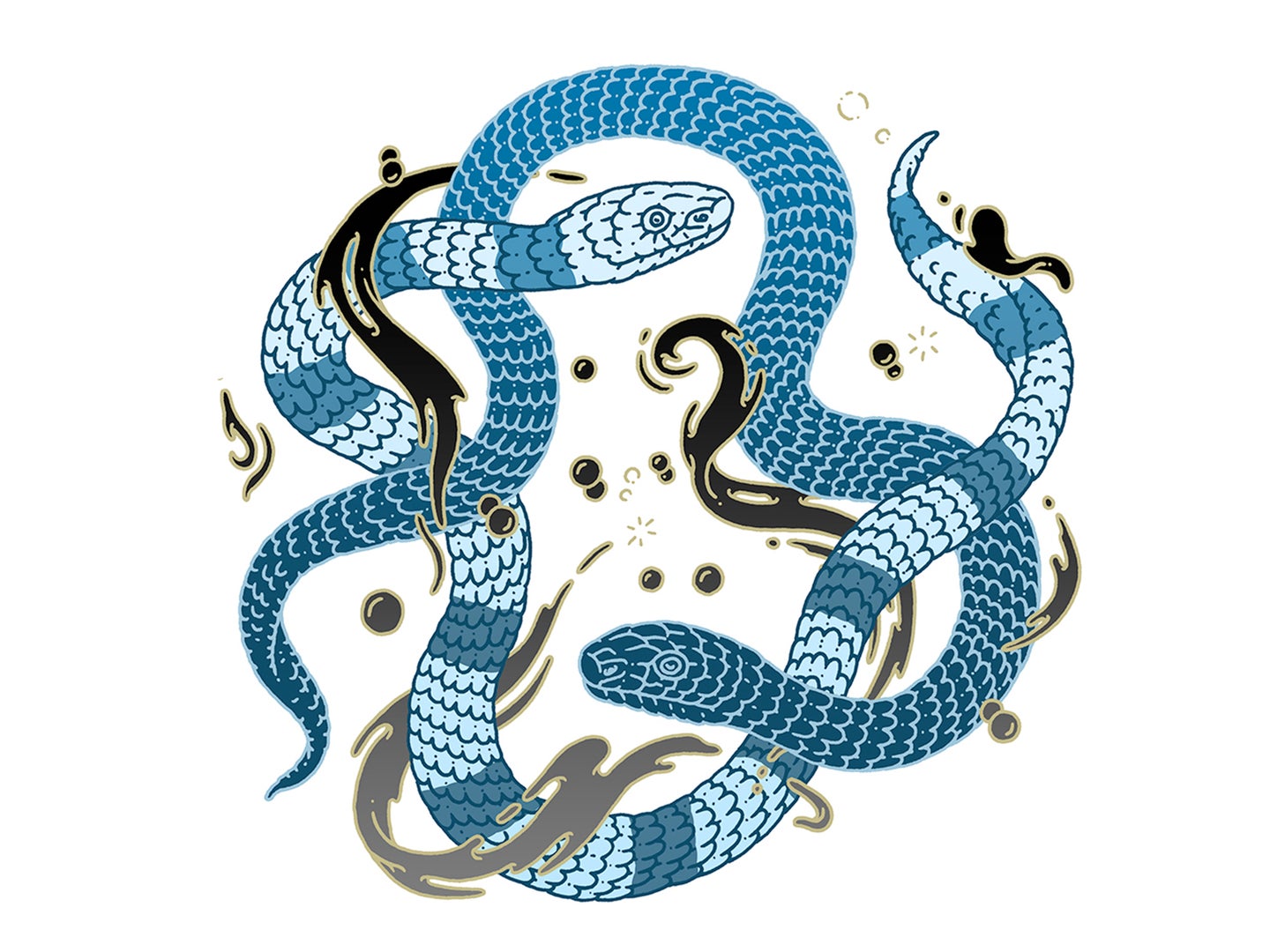 6 surprising ways animals are adapting to a human-dominated world

Pushed to the brink, animals are picking up new behaviors and tricks to persevere in a world ruled by humans.

WE HUMANS have an outsize influence on this planet, and our winged, finned, and four-legged neighbors are feeling the pinch. Many animals have died out in response to the pressures and blights imposed by our species, but some survivors are adapting. Intrepid fauna are showing off never-before-seen behaviors, shifting their diets, and even evolving different shapes, sizes, and colors.

Scores of species have dug out clever niches in risky territories meant for people. Peregrine falcons, for instance, went from cliff diving for pigeons to nesting in and hunting from skyscrapers. Orangutans, meanwhile, are increasingly hiking around the forest on logging roads instead of swinging around on vines. In other cases, like the European starling’s, humans have introduced fauna that are now ousting local creatures.

These shifts are inevitable and likely permanent: There’s no going back to when wildlife was still completely wild. “We cannot re-create the world before we interacted with it,” says Tag Engstrom, a herpetologist at California State University, Chico, and an expert in conservation and invasive organisms. “There’s no pristine place anywhere on the planet. There are microplastics at the bottom of the ocean, and Antarctica is melting. The world has changed because we’re in it.”

These are some of the most audacious members of the animal kingdom, who have found a will and a way to change right along with it.

At upwards of 1,000 pounds, most manatees need not fret over predators. But every winter, dozens of “sea cows,” as they’re affectionately called, die as a result of a quieter threat known as cold stress. While manatees share the pudgy appearance of seals and walruses, they lack the thick layers of blubber that allow those marine mammals to hang out in frigid habitats. In the event of a cold snap, the chubby swimmers can experience hypothermia and lowered immune system function. If they can’t find warmth within a few hours, they die.

Fortunately, in recent years the sea cows of South Florida have found refuge in an unexpected place: power plants. As they churn out electricity for homes and industry, such facilities avoid overheating by cycling water through coolant systems. When that liquid returns to rivers and lagoons, it’s sometimes full of nasty chemicals. But it’s also toasty, and the runoff provides a safe haven for manatees who can stomach it. One 2006 study in the journal Marine Mammal Science found that when bay temperatures drop below 68 degrees Fahrenheit in Florida, an estimated 60 percent of the state’s sea cow population basks in the discharge of just 10 power plants. At least one of those facilities has even created viewing areas where the public can watch the cozy animals in action.

Sound pollution is generally pretty bad for wildlife—that’s why it’s called pollution. Biologists have connected the cacophony created by Navy sonar to whale strandings and have learned that excessive noise may shorten the lives of adolescent zebra finches. But sometimes our ruckus provides critters with an advantage.

One 2019 study in the journal Ornithological Applications revealed that the white-rumped shama, a small bird native to Southeast Asia, actually had a better chance of fledging chicks near traffic. When conservation ecologists installed an equal number of nest boxes next to busy roads and deep in the forest in northern Thailand, they saw that in the more sheltered landscape, nearly all the eggs fell victim to predation. It’s probably important that both of the white-rumped shama’s main assailants, the green cat snake and the northern pig-tailed macaque, prefer to stay in the trees rather than risk coming near humans. The researchers figure that the birds willing to take a chance on nesting near us ultimately had to contend with fewer threats. As the old adage says, “The enemy of my enemy is my friend.”

With an adorable little snout and jiggly rolls of flesh, the wattle-necked soft-shell turtle is considered a delicacy in its native range of China and Vietnam, where people have hunted the species to the point that it’s critically endangered. But across the Pacific Ocean, the turtles’ own voracious appetites have the potential to wreak havoc.

When Eastern and Southeastern Asians emigrated to the Hawaiian island of Kauai in the 1850s to build and run sugarcane plantations, they brought a few wattle-necked snacks with them. With no natural predators or even other freshwater turtles to compete with, the reptiles became a growing source of destruction. Somewhat ironically, they’re now at the top of their adopted food chains, gobbling up native species that exist nowhere else on earth, like endangered shrimp, snails, and waterfall-climbing gobies. Conservation experts would typically recommend removing such pests, but local wildlife agencies have given the turtle amnesty—for now. The island currently serves as a life raft for the wattle-neck’s global population.

In the waters off Australia, the island of New Caledonia, and neighboring climes lives the turtle-headed sea snake, a fish-eating reptile that’s turned as toxic as its surroundings. Usually, these serpents sport a pattern of alternating black and white stripes that make them look a bit like legless pandas. Recently, however, ecologists have noticed them losing those stripes, with an increasing number appearing all black instead. What’s more, in areas where turtle-heads have changed their tone, they do so en masse: 95 percent of the sea snakes that live just south of New Caledonia’s capital city, Nouméa, went to the dark side in the span of just a little more than a decade.

Many of the unpatterned turtle-head populations were discovered downstream from humans and urban areas. Best as a 2017 study in the journal Current Biology could tell, the sea snakes are turning black because the melanin in their wriggly bodies tends to bind to heavy metals. Changing color could allow serpents beset by pollution to capture the toxins in their skin—and flush them out every time they molt. Experts call this “industrial melanism,” but you can just call it gnarly.

From the animated film Ratatouille to internet darling Pizza Rat, we all know that rodents and city life go hand in paw. Bustling neighborhoods provide a nearly endless array of nooks and crannies where small animals can avoid predators, safely reproduce, and find grub. Many rodent species have no problem making use of our scraps, even if it means diving onto a subway track or bike path for a pepperoni slice.

Now urban ecologists are learning how living off of leftovers has morphed rodent physiology. One 2017 study from the journal Molecular Ecology found that white-footed mice from New York City’s Central Park have evolved metabolic genes that, researchers think, help them digest fatty snacks and complex carbs in addition to the grains, fruits, and acorns their country cousins rely on. The experts have even given this idea a cheeky name, “the cheeseburger hypothesis.” But living in cities may also be changing rodents in other ways. Another 2020 study in the Journal of Mammalogy saw that white-footed mice and meadow voles living in Pittsburgh, Pennsylvania, had larger skulls than those residing in nearby rural areas. The biologists believe bigger brains might give rodents the cognitive skills and memory capacity they need to deftly navigate the concrete jungle.

Elephants use their 6-foot-long tusks to dig wells in search of water, lift objects, rip bark off trees, and even battle lions. In other words, the ivory appendages aren’t just majestic to look at—they’re highly useful tools. So it might seem strange that a significant number of African elephants in Mozambique’s Gorongosa National Park, once a heavily poached wildlife area, are now being born without tusks.

According to a 2021 DNA analysis published in the journal Science, the tusklessness is no coincidence. After decades of being shot by ivory brokers, the matriarchs in some herds have passed down a trait that prevents the females’ prize possessions from growing in—and helps them avoid being hunted. No one knows yet how widespread these genes might be in the greater population of African elephants, or how the loss of tusks might affect the mammals’ survival overall. But the findings are a powerful, if depressing, reminder of the extremes a species might endure to evade extinction.