Air pollution is choking solar energy around the world

To capitalize on the sun's rays, countries like China need to part the smog. 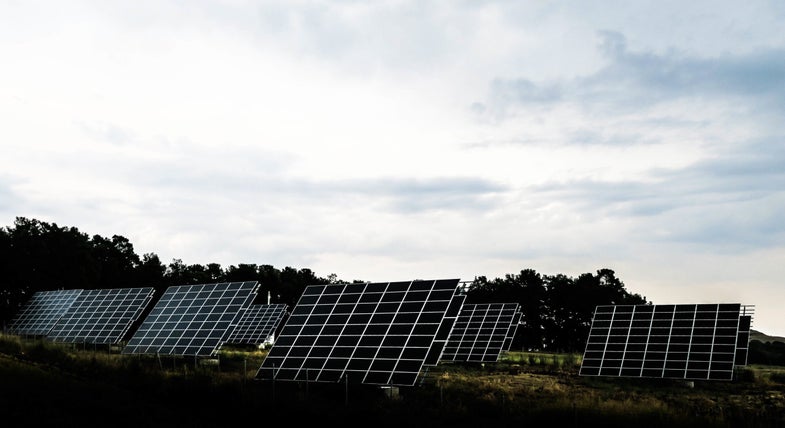 Clouds settling in over a field of solar panels. pxhere
SHARE

The smog in Beijing is so bad it can be hard to see the sun sometimes. That’s true if you’re a resident or tourist, and also if you’re a solar panel. In fact, the country’s record-breaking air pollution means that China’s booming solar sector could be producing more clean energy, and getting much more bang for its buck, if only its skies were cleaner.

In a recent PLOS One study, researchers at the Swiss Federal Institute of Technology in Zurich put numbers to that: If China pushed an aggressive set of policies aimed at curbing air pollution from its fossil fuel-powered sectors down to nearly zero, by 2040 its fleet of photovoltaic solar panels could produce nearly 160 terawatts per year of extra energy. That’s an additional $7 to 10 billion dollars annually—in case the public health benefits aren’t enough incentive.

“China is the world leader in installing solar photovoltaics, and at the same time, it’s the country that is suffering the most from air pollution,” says Mercè Labordena, a renewable energy researcher and lead author on the study. A lot of the country’s air pollution stems from the burning of fossil fuels, namely coal—for which China also happens to be the world’s largest consumer.

The more clutter there is in the sky, the less solar radiation reaches the hungry surface of solar panels. Particles like sulfates can reflect radiation, and others like black carbon absorb it before it reaches the ground. “There’s no question—you get the particulates out of the air, you get more solar,” says Dan Kammen, professor of energy at the University of California, Berkeley.

You also get healthier citizens. Air pollution is tied to breathing difficulties and heart disease, dementia and other cognitive declines. More recently, it’s even been tied to reduced fertility. Past efforts to reduce air pollution have saved millions of lives, and future efforts could save millions more.

While China has taken some strides in addressing its air pollution problem—primarily for the sake of public health—there’s still a lot of room for improvement. In the study, Labordena and her colleagues took a close look at the country’s fossil fuel-based sectors, and asked what would happen if China took the most ambitious policies in curbing air pollution. Such measures include things like upgrading coal power and industrial plants with the very latest pollution-control technologies, and switching from coal to natural gas or propane for residential heating, Labordena says.

Using a climate model, the team simulated how much more sun the country’s solar panels would see if the government implemented these and other measures. Researchers found the impact would be highest in the country’s northern, eastern, and south-central regions, where populations are dense, the skies are hazy, and the bulk of China’s photovoltaic panels are located. If these regions continue to scale up on solar, Labordena explains, “the provinces in this region may benefit the most from cleaning up the air.”

That dirty skies can make a dent in solar productivity in China and elsewhere, is well established, but Labordena’s study is the first to put a dollar figure on the financial benefits of improved solar productivity.

But the solution isn’t exactly cheap: China would have to spend between $50 and $70 billion to curb its air pollution to that extent. The extra cash from thriving solar panels would at least offset 17% of these costs, the researchers estimated. And even smaller reductions in air pollution would benefit the solar industry and public health. “Cleaning the air in China is needed greatly to improve the health of their people—currently, air pollution in China is responsible for about 1.1 [to] 1.6 million premature deaths annually,” Labordena added in an email.

For Kammen, the results illustrate just how badly solar and fossil fuel-driven pollution get along. One of the concerns about China’s solar expansion is that it hasn’t been accompanied by a reduction in its coal sector, he explains. In fact, Chinese coal use this year is estimated to have increased substantially compared to 2017, according to a report published just last week. “We don’t just want to just add some solar, we want to get a replacement process,” he says. “That’s a huge win”—for the sake of solar panels as well as public health.

Limiting the amount of particulate matter streaming out of power plants is only a partial solution, anyway. Not only are such technologies expensive and typically require power to run, but they also don’t curb greenhouse gas emissions. Rather than investing heavily in extending the life of a coal-fired power plant, it might pay off to go 100 percent solar, he adds.

The problem is by no means restricted to China. Photovoltaic panels in major cities like Delhi and Singapore suffer under hazy skies, too, according to a study led by MIT research scientist Ian Marius Peters, who specializes in photovoltaics. In Delhi, for instance, it causes silicon solar panels to see around 12 percent less sun than they would in cleaner air. Nor is the issue limited to fossil fuels. Each region has its own particular blend of particulates in the air, not all of which is of direct human origin. For instance, the air pollution caused by California’s deadly wildfires last month was so extreme that the productivity of solar panels suffered hundreds of miles away in the San Francisco Bay area, Kammen says.

What worries Peters the most is that the financial losses of reduced solar output might drive investors away. “If companies see that they can’t get their revenue out of these systems, that will erode trust in this technology and reduce the amount of solar that you’ll put up,” says Peters, a research scientist at MIT who specializes in photovoltaics.

Nevertheless, Peters hopes that as the world increasingly adopts solar, the panels themselves will eventually trigger a positive feedback loop: The more solar, the cleaner the air will be, and the more energy the panels will generate, the less reliant one becomes on coal, he explains. Ideally, “solar should play a role in actually getting rid of this problem.”