I’m a scientist who’s suing the EPA. Here’s why.

The EPA is broken, but we still have a chance to fix it. 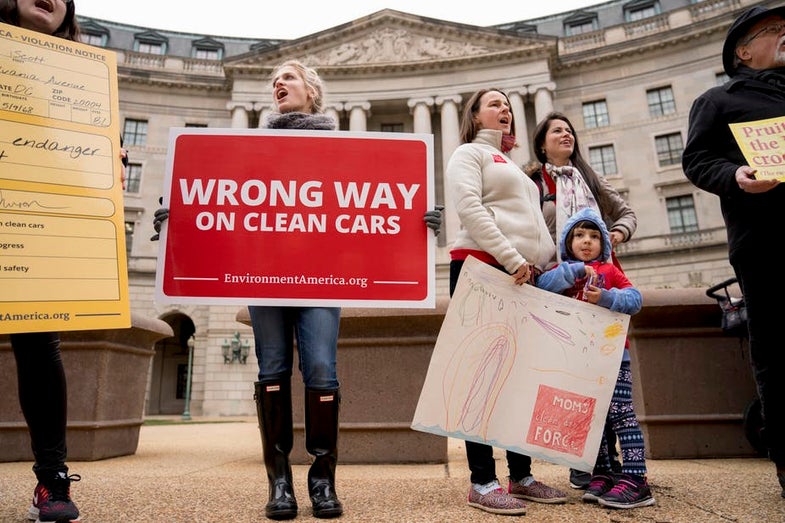 In 2017, just a few days after Donald Trump was sworn in as president, a freshman GOP lawmaker with only a few days on the job of his own, proposed House Resolution 861. Its language was ominous: “The Environmental Protection Agency shall terminate on December 31, 2018.”

I was in my sixth year on the EPA’s Science Advisory Board when H.R.861 was introduced. When I called senior EPA colleagues to assess the threat, I was assured that it would never happen; the nation’s environmental laws, and the agency that makes and enforces them, could not be killed in two years by a 10-word resolution written by a rookie congressman.

Then along came Scott Pruitt.

Since taking over as administrator, Pruitt has overseen the nominations and appointments of a diverse array of lobbyists and corporate insiders while at the same time letting key vacancies languish. He has put the brakes on enforcement, slowed or suspended progressive regulatory actions initiated by his predecessors, and defended draconian budget cuts proposed by the White House.

From where I sit as both a scientist and former EPA adviser, the motivation behind Scott Pruitt’s actions is as clear as day: He isn’t reforming the agency; he’s trying to kill it.

The good news for the EPA is that a majority of Americans support its fundamental mission to protect the environment and public health. And, judging by recent reports, bipartisan calls for Scott Pruitt to resign are growing louder. But for the EPA to really rebound after Pruitt’s repeated assaults, the agency will need to address some of its legitimate shortcomings.

I’ve been dedicated to environmental science since college, and I have devoted a large chunk of my academic career to government service since shortly after George W. Bush was elected president.

My first job advising the EPA came in 2003 under Administrator Christine Todd Whitman, a Republican. I rejoined the EPA in 2011 when Lisa Jackson, a Democrat, was appointed to lead the agency. In spite of divergent agency priorities under different administrators, there were three constants that held the agency together: a respect for science, genuine concern for environmental and public health, and career EPA staff who served as a buffer during political transitions. All three are under attack by Scott Pruitt.

He has floated proposals that have not only ignored widely accepted and peer-reviewed science, they have been toxic to morale at the EPA. Last summer, for example, Pruitt—who for years has questioned established climate science—proposed a series of polarizing “red team/blue team” debates aimed at unraveling the public consensus—and years of hard work by EPA staff—on climate change.

Just last month, Pruitt vowed to enact new rules limiting what pseudo scientists like Steve Milloy have deceptively called “secret science.” On the surface, such a rule sounds like a good idea; who, in their right mind would want secret science? But, in reality, this rule would mean that critical public health studies could no longer be used to inform EPA policy because some of the data are protected doctor-patient or researcher-participant confidentiality.

Also last month, Priutt issued a series of talking points to agency staff instructing them to exaggerate uncertainties about the human causes of climate change. In effect, Pruitt is asking EPA staffers to lie.

As a result of these—and other—actions, career civil servants are leaving the agency in droves, further hastening EPA’s brain drain.

In spite of the chaos and controversy that’s swarming around Scott Pruitt’s EPA, those of us who care about the agency have to be honest with ourselves and admit that the agency isn’t entirely free of responsibility for the situation it finds itself in.

Going back several administrations, the EPA has done little to harden itself against the criticism that it’s detached from the social and economic realities faced by many Americans. This, in turn, has opened the agency to repeated attacks from those who incorrectly believe that protecting livelihoods and businesses means repealing “job killing” environmental regulations. It’s rhetoric like this that created an opening at the head of the EPA for a conservative activist like Scott Pruitt.

When the time comes, resuscitating the EPA will be an urgent—but not unprecedented—task for new leaders in government. The easiest part of the job will be replacing Scott Pruitt, if he’s still around, with an administrator who doesn’t have disdain for EPA’s mission and who doesn’t mistrust its employees. Another easy step will be to initiate a thorough house cleaning. Pruitt appointees who would like us to believe that certain chemicals and pesticides aren’t toxic must go. Appointees whose integrity is compromised by conflicts of interest must also be fired.

The hardest part of the job will be reinventing an agency that is in dire need of reinvention. The EPA’s dual-purpose mission of protecting the environment from people and protecting people from a damaged environment must remain intact. But, the way in which the EPA balances environmental protection with the hopes and needs of ordinary Americans must change in the same way that the rest of us who work in the environmental sciences have had to change.

In my job, we don’t just talk about “the environment” anymore; we talk instead about the need for making trade-offs across environmental, social and economic goals. In other words, we talk about sustainability.

Step one is to establish better relationships with the communities the EPA serves. The risks that a reinvented EPA will be responsible for managing – from the environmental and and public health impacts of climate change to polluted water systems in cities like Flint – must be jointly defined by EPA staff and the citizens who pay their salaries. Likewise, how the magnitude of these risks is measured must be based on science and, importantly, people’s values.

I can already hear strident environmentalists bristling at the suggestion of letting public values decide. But they needn’t be afraid: Public values already decide. How we think about environmental health is based entirely on our values.

What we deem to be a “healthy environment” is a constructed, values-based judgment; what we really mean is, healthy enough so that we can feel comfortable with how much of the environment we’re prepared to give up in return for other things—social and—that we also value but for different reasons.

A reinvented EPA must also forge stronger partnerships with business: Corporate America needs the EPA as much as the EPA needs corporate America. Consumers are demanding more leadership from companies when it comes to sustainability, and they are punishing companies – by withholding their money – that don’t deliver on this new social contract.

In my experience working at the intersection of sustainability and business, I’ve been repeatedly told by executives that it’s much easier for them to justify leaving potential earnings on the table in the name of environmental and social progress when they are compelled to do so by regulation. Here’s where better partnerships between companies and a revamped EPA can help. Corporate America and the EPA must work together over the long term to craft sensible and, importantly, adaptable regulations that are responsive to changing environmental, social, and economic conditions.

Taken together, the American people will benefit from a reinvented EPA because the agency will do a better job of responding to their needs and concerns. Businesses will benefit because they’ll be better able to plan for the shocks brought by new regulations. And, the EPA will benefit because it will have powerful new allies—companies and more supportive voters—to help it achieve its mission.

All of this will mean less helter-skelter at an agency that’s essential for American progress. And, importantly, it will mean that we’ll never again see the perceived need for another Scott Pruitt.