The air quality in San Francisco is so bad, being there for a day is like smoking 10 cigarettes

Particulates in the air from wildfires make going outside a health risk for many Californians. 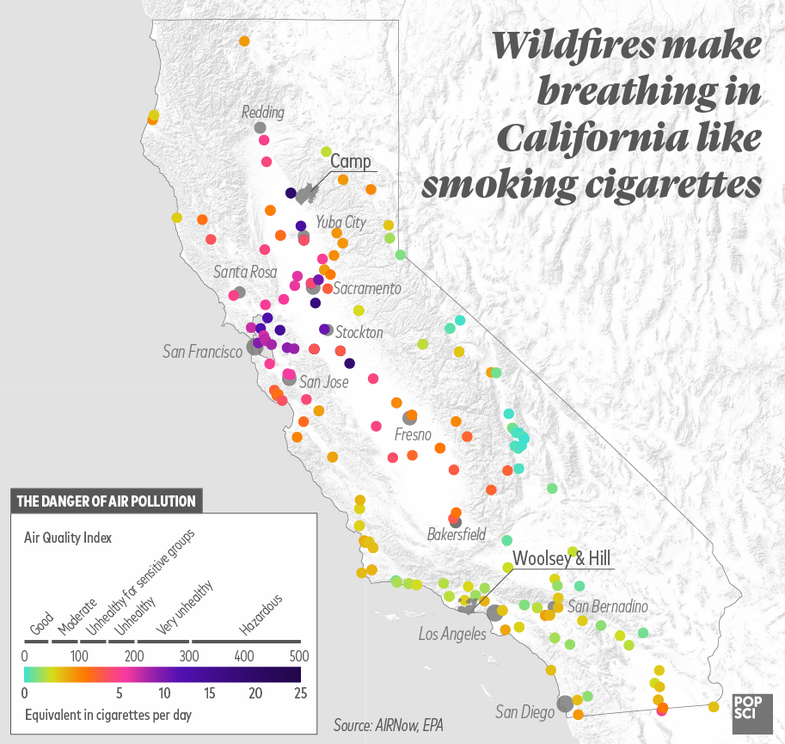 After tearing through entire towns, burning over 10,000 homes and killing at least 70 people, the Camp Fire in Northern California is now about 65 percent contained. But while the flames have retreated from view, the wildfire smoke still blankets large swaths of the state, including San Francisco and Sacramento. The air quality last week was some of the worst in the world: Schools were cancelled, and residents were warned to stay indoors. As the changing climate makes fires more likely, wildfire smoke-filled skies—and their health effects—are going to become an increasingly common problem.

Wildfire smoke contains large amounts of particulate matter, including ones that are less than 2.5 micrometers in size (about 30 times smaller than a human hair). Particles of this size are a major health concern, because they’re small enough to pass deep into people’s lungs and into the circulatory system. The bulk of PM2.5 in the United States comes from power plants and cars, but about 20 percent of the total is created by wildfires.

When they spark, though, fires can have a dramatic effect on air quality: On days where PM2.5 levels are higher than the standards set by the Environmental Protection Agency, they’re responsible around 70 percent of the pollution.

Particulate concentrations didn’t stay over 200 for too long, and levels dropped to 151 on Sunday. But that improvement doesn’t mean relief: It’s about the same as the average air quality last week in Delhi, India, which has some of the worst air quality in the world.

On their own, these high concentrations of PM2.5 are dangerous to people’s health. However, notes Ed Avol, a professor of clinical medicine and air pollution expert at the University of Southern California, the particular stuff that burned in the fire to create the particles can create additional danger.

“The size of the particle determines how it gets inhaled, but the chemistry of it will determine how toxic it might be in the body,” he says. Wildfires burn houses, which means they also burn chemical cleaners, insulations, and metals, and add them to the air. While some particles in the smoke might be relatively innocuous, only triggering a response because of their size, others can be more dangerous—like heavy metals, which might accumulate in the body. “They can lay the groundwork for other health problems,” Avol says.

Breathing in air polluted by wildfire smoke is associated with a range of health effects: it’s linked to increased risk of hospitalization for respiratory or cardiovascular problems, for example. Like the flu, spikes in particulate matter concentrations generated by fires are most dangerous to the very young, the very old, and those who already have health problems. People over 65 are the most likely to have cardiac problems after smoke exposure, and respiratory problems primarily affect children. Others at risk include people who spend large amounts of time outside, like agricultural workers, people who are homeless (and can’t get out of the smoke), and athletes, who might keep exercising at high levels, Avol says.

As the climate changes, wildfires like the Camp Fire are likely to become more common—and the resulting particulate matter will become more standard as well. A research team coined the term “Smoke Wave” in 2016 to describe times when wildfire-generated particulate matter stays at high levels for more than two days. Their study showed that over 80 million people in the United States will see a 57 percent increase in the frequency of these smoke waves in the next 30 years, based on future fire predictions, and those smoke waves will be more intense.

“With climate change, this is not something that’s going to disappear,” Avol says.

The wildfire smoke in Northern California will probably dissipate this week. Levels of PM2.5 will drop back down, and air quality will return to normal for the region. But that doesn’t mean that everyone’s health goes back to normal in tandem, Avol says. “There are longer effects of even short term exposures,” he says. “It can last much longer than the immediate episode.”

Despite the long tail of some of the health problems, and the ever-increasing threat of more and more fires, terrible air in California and along the west coast is still isolated to a handful of days out of the year. In India and China, last week’s air is the norm. “In communities around the world with high pollution levels, people are dealing with this every single day,” Avol says.