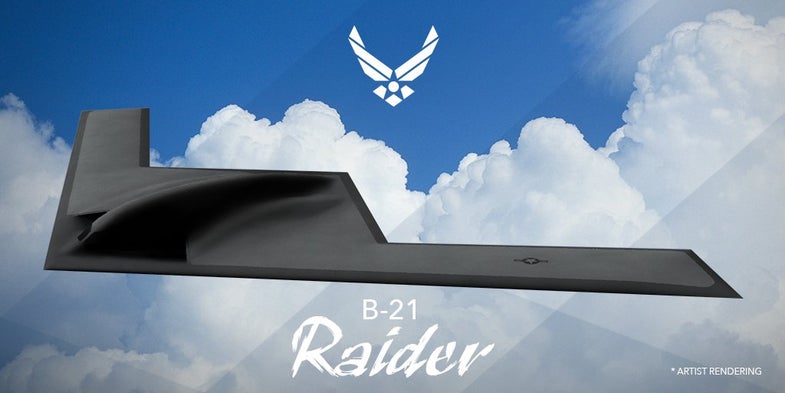 Does the United States need another bomber? According to the United States Air Force, the answer is overwhelmingly yes. But to sell the public on it, the Air Force is reaching back in time to drape the latest bomber design in the patriotic aura of World War II. At the Air Force Association conference, Secretary of the Air Force, Deborah Lee James, yielded the floor to Lt Col Richard Cole, who was Jimmy Doolittle’s co-pilot for the 1942 Tokyo Raid. So what’s the new bomber’s name? Why, the B-21 Raider, of course.

The name will go on Northrop Grumman’s B-21, a modern, stealthy flying wing in the general style of Northrop Grumman’s B-2 Spirit. Originally developed as the “Long Range Strike Bomber,” the Air Force revealed the B-21 moniker last February with an astoundingly non-descript concept art picture. The plane, should Congress fully fund the program with the 100 to 200 planes the Air Force wants, will replace the ancient B-52 bombers, and the aging B-1 bombers.

Apart from the number, the maker, and now, the name, there isn’t a whole lot known about the bomber to the public. The unit cost for each bomber is around $564 million in 2016 dollars, or about the same as five F-35A stealth fighters. Keenly aware of the public’s frustration with the expensive and underperforming F-35, the Air Force is going to great lengths to show that the B-21 Raider isn’t repeating the same mistakes. Just kidding! The Air Force is instead arguing that the cost of the Raider itself, like the rest of the program, should remain a secret.

A Congressional Research Service report on the B-21 Raider, designed to inform the actual elected representatives that will vote to fund the bomber program or not, noted that the bomber is stealth and something Northrop Grumman is ready to build. Yet, that same report was unable to say if the bomber itself will be capable of carrying nuclear weapons, a major policy and production decision that civilian elected officials should likely make, rather than leaving it in the hands of the military and the companies that make the planes.

However it is received, the B-21 Raider could not be more different from the B-25 Mitchell bombers used in Tokyo Raid that inspired its name. The bombers were small, light planes, carrying a payload of just four 500-pound bombs, about half of what a Reaper drone can carry today, and likely a mere fraction of what the B-21 will actually carry.

The Doolittle Raid, too, is an odd historical touchstone for the Air Force. The raid, flown by the Army Air Forces before the Air Force was an independent entity, was widely acknowledged as a success because of the boost it gave American morale, while the actual damage it did was materially insignificant to the course of the war. (Some historical readings do give it a greater strategic impact). When the Doolittle raiders landed from their one-way flights in China, they were housed by locals, before moving on. In response to housing the raiders, Japan launched reprisal attacks on those same Chinese civilians, killing at least 10,000 by one missionary’s estimate in the village that Doolittle planned as a destination. (Other estimates put the total dead in reprisal attacks in the hundreds of thousands). For America’s local allies on the ground, the raid had deadly consequences.

A widely publicized attack with unknown impact on an enemy’s actual ability to fight is perhaps uncomfortably close to how air wars are fought today, where attacks are turned into gifs and memes by official military spokesmen. It’s an odd history to embed in the name of a stealthy, high-tech, possibly unmanned bomber that might someday carry nuclear weapons as a safeguard against (or precursor to) an apocalypse.