The making of a marvelous machine 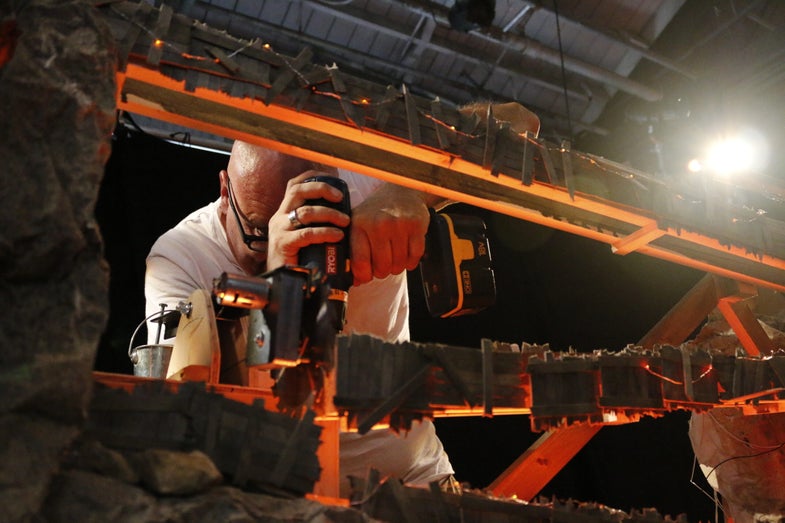 To advertise the new mobile game Leo’s Fortune, master Rube Goldberg machine crafter Brett Doar, who we covered in our March issue, has devised a new contraption. The game centers around a cache of stolen gold, as Leopold, a spherical creature with a luxuriant moustache, rolls off through mazes and woods in search of his precious treasure. Doar was asked to bring the game to life for a video, and although Leo and his adventure seem almost custom-designed for his unusual talents, the build was hardly easy. After two weeks of tinkering, and 68 frustrating takes, here’s the final result, directed by Christian Jacobs:

Popular Science checked in with Doar throughout the build to gain some insight into his creative process. The project’s start was fairly simple. After sketching out his concept, Doar gathered his regular crew, including Trevor Yamamoto, T. J. Lewis, and Paul Thompson, and went shopping for materials. In this case, they relied mostly on wood, especially two-by-fours, which connected with the game’s rough-hewn, Old West look. “It has this tendency to look sophisticated but at the same time unsophisticated,” he says. “You can tell some skill has gone into building it, but it’s a little more accessible.”

Once he had his materials, Doar and his crew headed out to the set, an old, largely abandoned paint factory a few hours drive from Los Angeles. “I have a mobile shop that I bring, including a table saw, a chop saw, a band saw, a drill press, and more,” he says.

The initial construction took several days, but the real challenge was getting everything to work as well as it did in his head. Two days before the final video shoot, for example, Doar was struggling with one leg of the journey in particular, visible at the 53-second mark. “We’ve got one thing that is probably the most finicky,” he said at the time. “A sledgehammer drops and hits a teeter-totter and launches a ball up and banks it off a shovel and shoots it into a net.”

Sounds simple enough, right? The sequence would work perfectly, then fail, for no apparent reason. “I’m pretty sure we’re controlling every element, but every once in a while the ball completely misses, and I have no idea why. It might just be a question of humidity and temperature.” 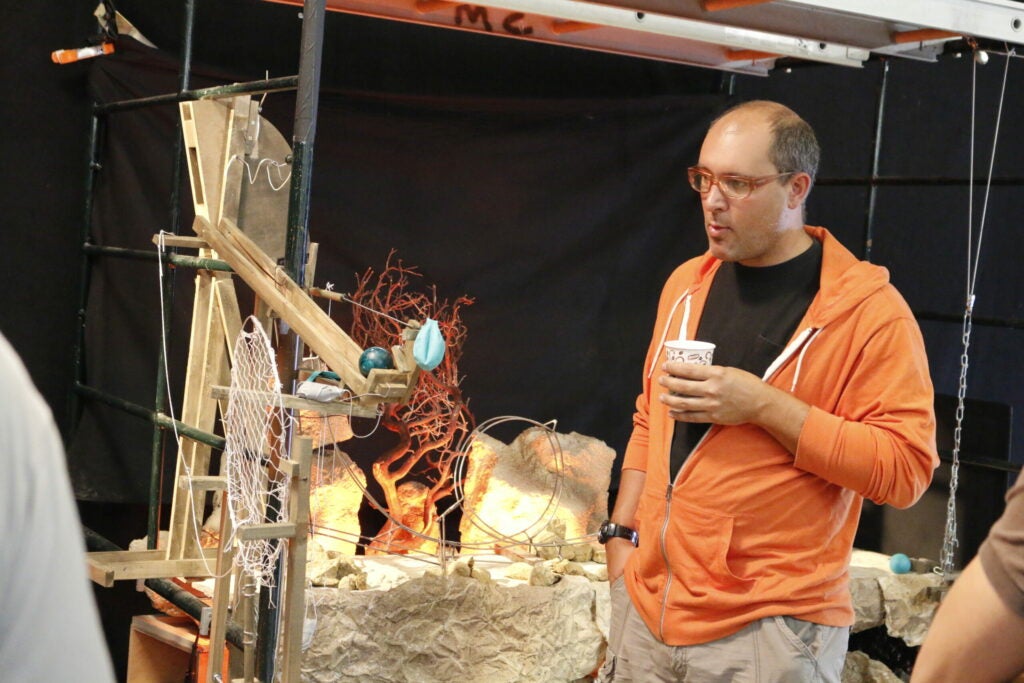 Brett Doar And His Machine

Another tricky feat was the loop-the-loop, seen at the 1:00 mark. The ball–Leo–had to be moving fast enough to complete the circuit without falling, but if it gathered too much speed on the circular track, it would fly straight off the course. For Doar and his crew, that meant bending and re-bending pairs of quarter-inch steel rods until they formed the perfect circumference. After several trials, though, they managed to get it right.

Once the entire contraption was working, a second crew came in to dress up the set, and make it look more like the game, before the video shoot. That required additional tweaking on Doar’s part. For example, the set dressers stained some of the wood. “I figured staining would be fine,” he says. “But the stain caused some of the wood to swell.” That, in turn, changed the speed of the ball, so Doar and his crew worked late into the night before the final shoot, realigning the tracks, changing the angles to assure the ball would move at the proper pace.

After two weeks of work, and never quite figuring out why the ball was missing the net on occasion, Doar’s final obstacle was more mundane. In the closing shot, the rolling ball picks up a sticker with glasses and a moustache, so that he resembles Leo, the character in the game. “You need to figure out the endpoint so he’s looking directly into the camera,” Doar says. To get it right, they had to set the sticker in exactly the right spot, so that the ball would roll over it, pick up the tape, complete a 3/4 turn, then stop at the end of the track.

Yet it did end up functioning as they’d hoped, and all those little errors along the way were actually highlights of the experience. “Something always goes wrong,” Doar says. “You feel cheated if it doesn’t. If everything goes perfectly, you wonder, ‘Were we really pushing ourselves?’”