This Badger Fits Inside An Osprey

Boeing's new truck solves a problem of Boeing's own making. 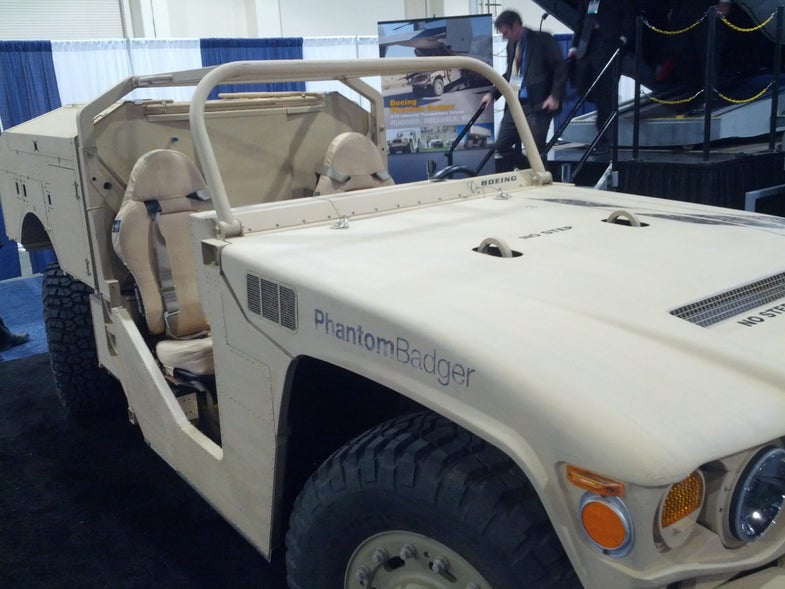 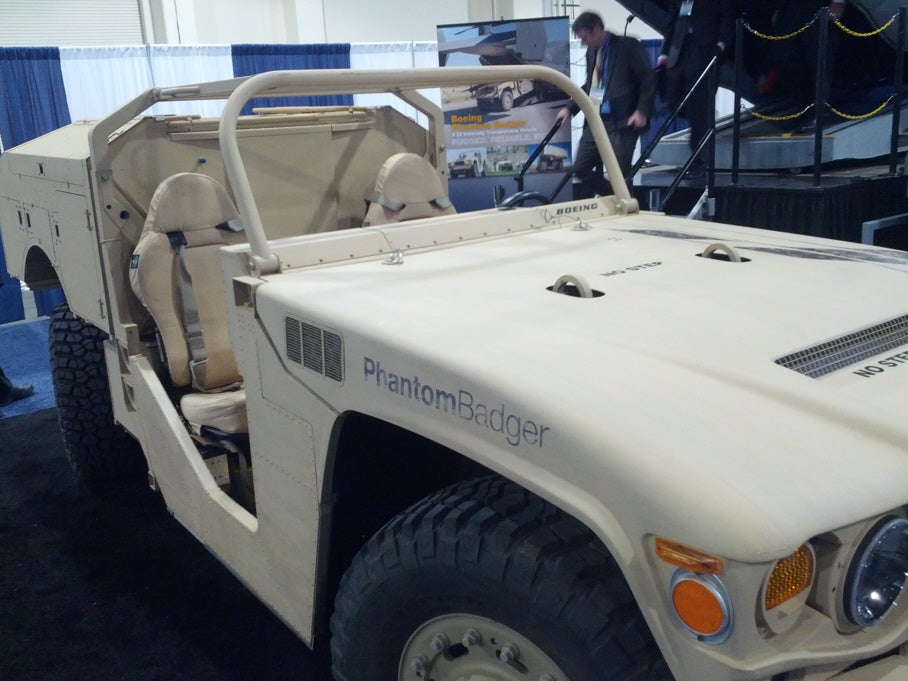 At the Navy League’s Sea Air Space Exposition this year in National Harbor, Maryland, there was an unusual craft on display next to Boeing’s usual display of aircraft. It was a jeep-like thing, both narrower and longer than expected. Dubbed the “Phantom Badger,” it solves a very specific problem: it fits (just barely) inside Boeing’s tiltrotor V-22 Ospreys used by Marines and Special Forces. Now when those troops deploy far ahead and into tricky places, they can finally bring a working vehicle with them.

To understand the Badger, first one must understand the Osprey. The V-22 Osprey is a tilt-rotor aircraft. This means that it can land and take off like a helicopter, which greatly expands the number of places it can go. In air, the rotors tilt forward, so it carries troops fast, carrying up to 32 troops or 10,000 pounds of cargo where it needs to be. The problem with the V-22, then, is that it can get into many places, and few other aircraft can go where it goes. So special forces or Marines operating from Ospreys can only use what Ospreys can carry with them, and for a long time that meant only small vehicles, similar to commercial ATV four-wheelers, were the only ground transportation an Osprey could supply.

The Badger lets troops do more, and gives them a better vehicle for Osprey-accessible areas than they could otherwise get. It can go 80mph on roads, ford up to three feet of water, and the entire back can be converted into a few different versions, depending on the modules available. These include a stretcher rack that can wounded back to an Osprey for evacuation, a machine gun mount, and others. It’s not going to be as durable as an MRAP, but at under 8,000 pounds and only 60 inches wide, it can go a lot of places a heavier vehicle can’t.

At the exposition, Popular Science spoke with Boeing’s Garret Kasper about the Phantom Badger. This isn’t exactly the first time Boeing’s designed a car, Kasper quipped. “Back in the 1960s we made the lunar rover.” Still, land vehicles are relatively new for the company. For the Badger, they collaborated with North Carolina’s MSI Defense Solutions.

On Tuesday, Boeing announced that the U.S. Navy has certified the Phantom Badger for flight onboard military V-22s Ospreys. And at the expo, Kasper shared this: there’s “an undisclosed Department of Defense customer” interested in the Badger, and it’s not the Marine Corps. That’s a truth by omission: the only part of the military outside the Marine Corps that uses V-22 Ospreys are Air Force Special Operations.