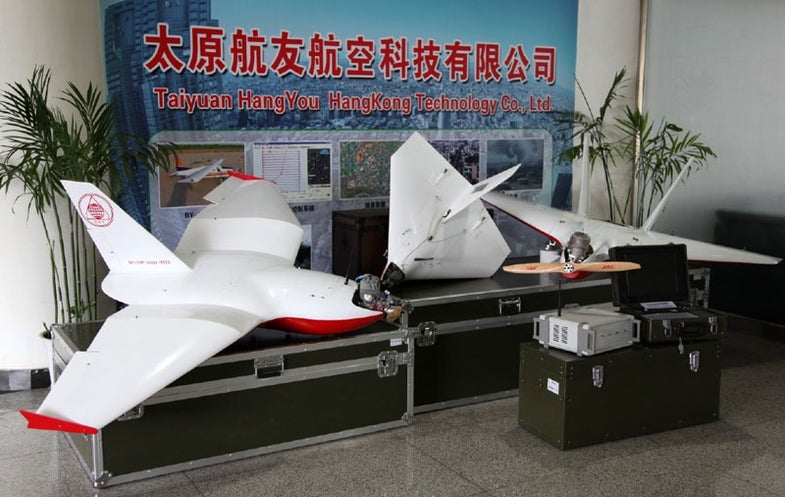 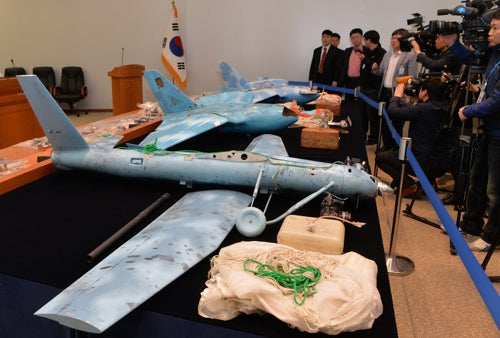 South Korea displays wreckage of three North Korean drones recovered in the last several months. The two drones towards the background (near the South Korean flag) are suspected to be based off of the SKY-09, a civilian Chinese drone. 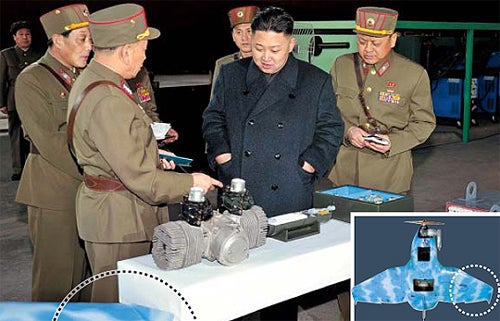 In a picture provided by DPRK propaganda, North Korean leader Kim Jong Un visits a North Korean military unit. The Chosun Ilbo notes that the wing at the bottom left of the picture is similar to that of the SKY-09 UAV, while it appears to be a UAV engine on the table. 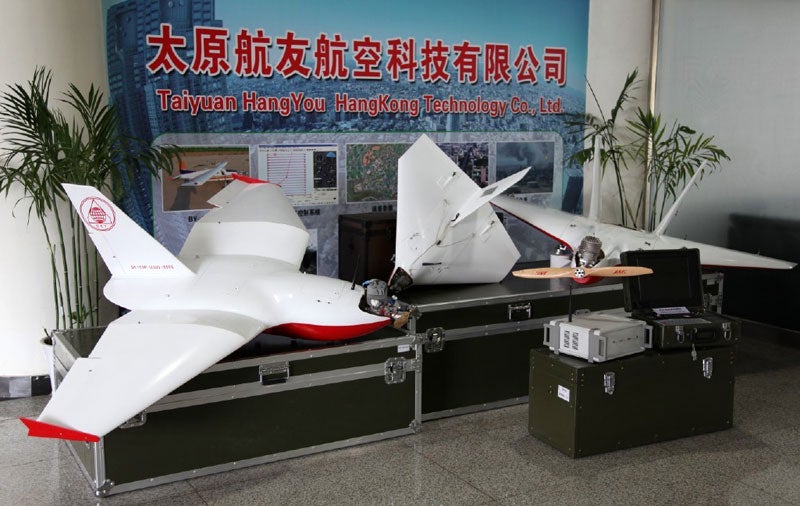 The SKY-09, on the left, is the small UAV that North Korea has apparently copied for its drone program. Taiyuan Navigation Technology is a civilian Chinese UAV manufacturer.

Earlier this month, two unmanned aerial vehicles (UAVs) crash landed well inside South Korea, following another such incident in 2013. Despite Pyongyang’s boilerplate denials, the flight paths indicated they originated in North Korea. In a triumph for Internet crowdsourcing, bloggers identified the drones to be Chinese in origin, the Taiyuan Navigation Technologies SKY-09 UAV model. Those civilian UAVs are rather small, only 12 KG in weight and a 1.92 meter wingspan, allowing the drones to carry only a 3 kg payload, which analysis of the wreckage suggests were small cameras. Ironically, it was the very small size and low speed of the North Korea UAVs that allowed them to stealthily slip through the DMZ.

There are a few avenues for how North Korea might have acquired Chinese UAV technology. One is through official channels of purchase or provision. However, a Hong Kong newspaper, the South China Morning Post, reported that China TranComm Technologies, the vendor for Taiyuan Navigation, has denied that they had ever sold any UAVs to North Korea. Another is through back channels or the black market. However, UAVs are supposed to be on the September 2013 list of dual use items that China banned from being exported to North Korea. The SKY-09’s has a relatively small price of a few thousand dollars, making the gains quite small compared to the potential domestic and international difficulties that could be caused if such channels were exposed. Another avenue is through traditional espionage or even cyber espionage. Unit 110, the cyber arm in the Reconnaissance Bureau of the (North) Korean People’s Army, has reportedly intercepted U.S.-South Korean war plans in 2009, so acquiring foreign civilian UAV design information is within its capability. Yet this channel would risk antagonizing North Korea’s neighbor and only ally.

The question of origin aside, the use of such repurposed civilian drones will likely continue. Expect to see Chinese drones proliferate in the future, both on the Korean Peninsula, and beyond.