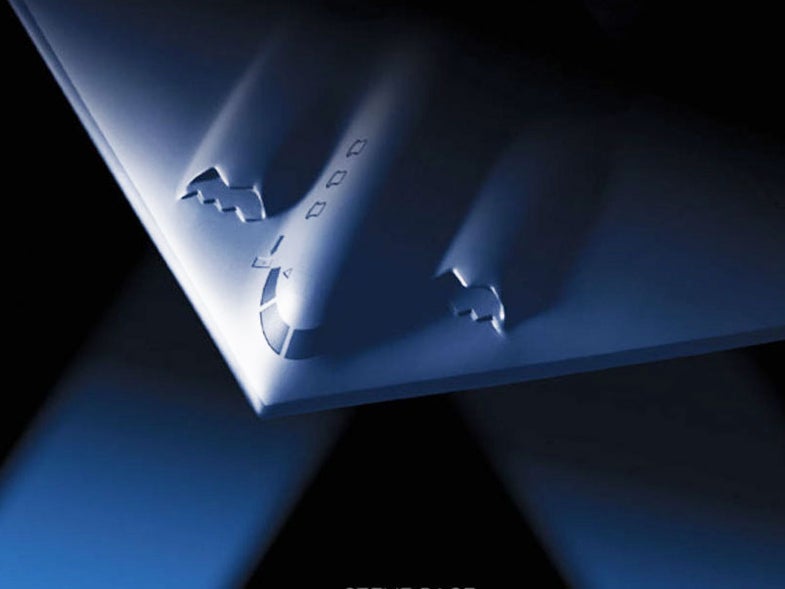 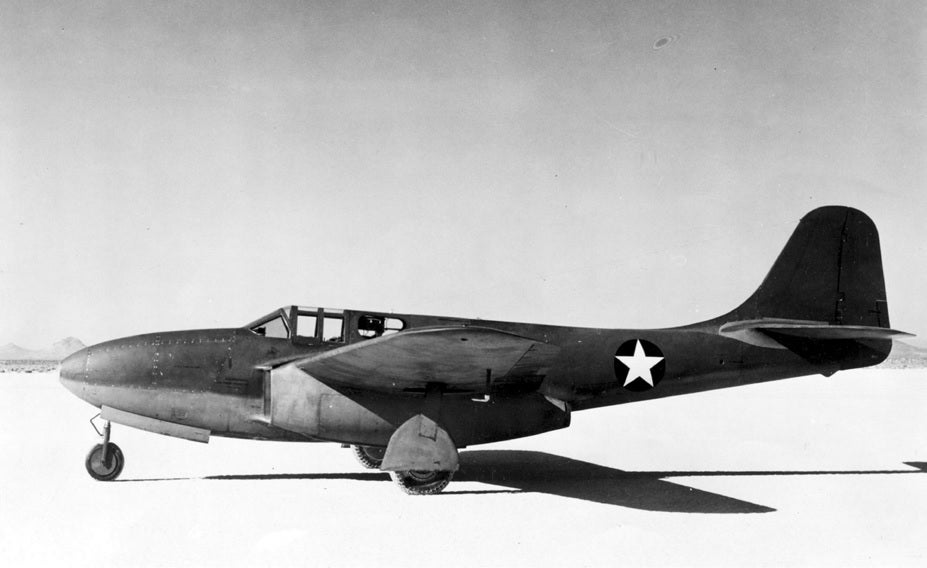 Caption from The Big Book of X-Bombers and X-Fighters: “This left-hand side view of an XP-59A illustrates one aspect of this secret project: there’s no USAAF serial number stenciled on its vertical tail. Serial numbers were applied later, though they were out of sequence—the next thirteen YP-59As were numbered 42-108771 to 42-108783, while the preceding trio of XP-59As were numbered higher (rather than lower) with the serial numbers 42-108784, 42-108785, and 42-108786.”

October 1, 1942 is an unusual start date for a history of aviation. Many begin in 1903 with the Wright Brothers at Kitty Hawk, or at the human-carrying balloons of the 18th century. The classically inclined may even start with Icarus, the hubristic and tragic character from Greek Mythology. In The Big Book of X-Bombers and X-Fighters, out today, Steve Pace starts instead with the Bell Aircraft Corporation’s P-59 Airacomet, the first jet airplane built and flown in the United States.

The Airacomet exemplifies the narrow focus of Pace’s work: only experimental planes (x-planes), only those designed for the United States Air Force, and only those with jet engines. As such, his work serves as a technological history of the cutting edge of high-end war machines, from the dawn of the jet age to the stealth testbed Tacit Blue and beyond. The stealthy flying wing B-2 Spirit bomber graces the book’s cover, while the book’s final chapter is devoted to the upcoming Long Range Strike Bomber (since renamed the B-21). Pace gives that narrow focus enough heft to fill 360 gorgeous pages, rich with detail and filled with pictures and illustrations of unusual airplanes.

Northrop (and later Northrop Grumman’s) flying wings are present throughout. Early on, we meet Northrop’s unpowered MX-334 flying wing glider, the program that lead to the jet-powered flying wing. Rare for aircraft, the test pilot lay prone inside the vehicle. Harry Crosby flew this plane for Northrop, as well as the company’s twin-tailed XP-79B flying wing. Crosby died during the XP-79B test flight, and he’s hardly the only tragic figure in Pace’s tome. Experimental aviation is a graveyard of premature ideas and sometimes human pilots.

World War II spurred the initial development of turbojet aircraft, but it wasn’t until the Korean War that any American jets would see combat. Pace captures the struggle of the Air Force (established as an independent branch of the military in 1947) to go from a gigantic fleet of rapidly obsolete propeller planes to a sleek, fast, jet-powered existence. The early phase of jet bombers gave us the underpowered and bug-eyed XB-43, as well as America’s first nuclear-capable jet bomber the XB-45 (called the B-45 in service), and others.

A tremendous amount of aviation evolution took place in these early years. While the B-45 is largely the domain of airplane buffs, just five years after the B-45’s first test flight, the prototype of most iconic jet bomber of all time, the XB-52, took its own test flight. The B-52 entered service in 1955 and is expected to serve with the Air Force until 2044. As Pace notes, “if this holds true, the B-52H will be eighty-two years old at its retirement, at which point it will be the longest-lived combat aircraft in history.” 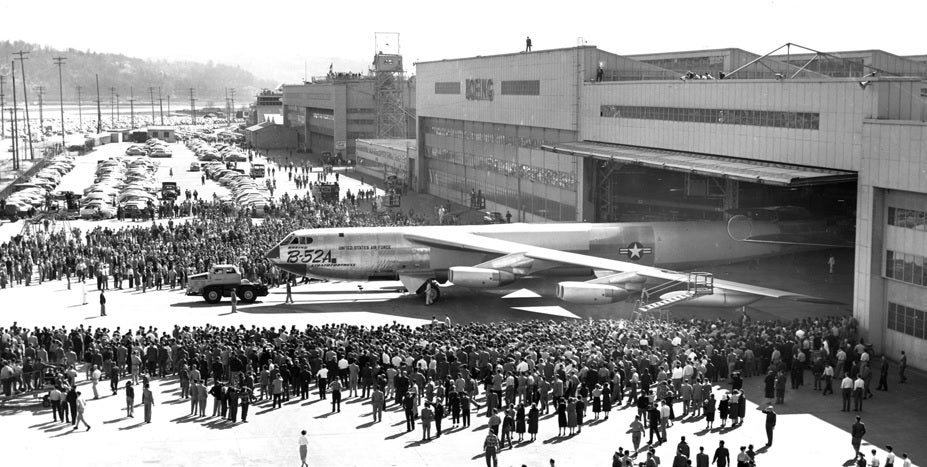 Caption from the book: “The first of three preproduction B-52A aircraft rolls out of the Plant 2 factory in Seattle, Washington. These three B-52A aircraft were used extensively as service test airplanes; they were not considered production aircraft.”

Most of the airplanes in the book aren’t nearly as successful as the B-52. One of the more iconic failures is the Parasite Fighter program, which aimed to put an escort fighter inside the bomb bay of an intercontinental bomber, since no existing fighters could match a bomber’s range in the late 1940s. Thus was born the XF-85 Goblin, a compact, angry engine with wings, guns, and a cockpit. Never terribly effective, it was made obsolete by an invention beyond any single airplane: aerial refueling, which extended the range of normal fighters to match that of bombers. 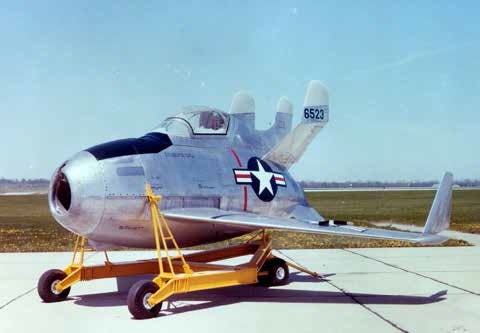 Caption from the book: “Goblin number one lurks on its special ground transportation dolly.”

Engines are the beating heart of Pace’s work, and he devotes the middle chapter of his book to propulsive systems. Airframes, the shiny metal exteriors of aircraft, get all the credit, but it’s the engine evolution that transformed jets from the underwhelming P-59 Airacomet to the powerhouse F-35. The relevant unit is “pounds force”, and the P-59’s engine only generated 1,250 lbf. Today’s F-35 is powered by an engine that generates 43,000 lbf. That’s a huge increase, and Pace makes sure to highlight the role of engines in making the jets possible. Pace’s chapter on propulsion is slim, but it’s important to understanding his whole approach to x-planes: new engines require new bodies, which spur the development of new engines–a virtuous cycle with supersonic outputs.

If there is a limitation in Pace’s book, it is deeply tied to the work’s strength: most x-plane jets date from the early and middle years of the Cold War. This is when jets were new, when the danger of being completely outmatched by another superpower was present, and when there were more easy improvements to make. The x-planes thin out the closer we get to the present-day, and while undoubtedly there are some programs that just aren’t known to the public yet, it seems that the general trend in cutting-edge military innovation is moving beyond expensive Air Force jets.

One of the more successful x-aircraft to transition into a military aircraft since the end of the Cold War is arguably the V-22 Osprey, a turboprop vertical takeoff and landing aircraft used by the Marine Corp and Air Force. It’s no jet, and yet it has caused arguably the biggest change in how Marines fight since the World War II Higgins landing craft. Yet as a turboprop, it’s beyond the scope of Pace’s book, so that’s a part of the future we’re missing here.

Drones make a minor appearance in The Big Book of X-bombers and X-Fighters, with a single page shared by General Atomic’s Reaper, Predator C, and Boeing’s Phantom Ray all grouped under “Occupied vs Unoccupied Bombers and Fighters.” The Reaper slides in under a technicality as a “turbopropjet,” but it’s the prop-driven drones, more than any stealth jet or super fast bomber, that have defined aerial warfare in the 21st century.

These are minor critiques. Pace’s focus on the history of experimental jets is a strong, informative history of the peak years of big budget planes built for big wars. It may be a finite history: the $1.5 trillion F-35 program gets the last part of the penultimate chapter, and its decades of development, towering costs, and likely middling combat experience are souring the American public, Congress, and the Pentagon on giant expensive super-planes.

X-plane programs may no longer be the future of war, but The Big Book of X-Bombers and X-Fighters is an excellent travel through the Planes of Future Past. 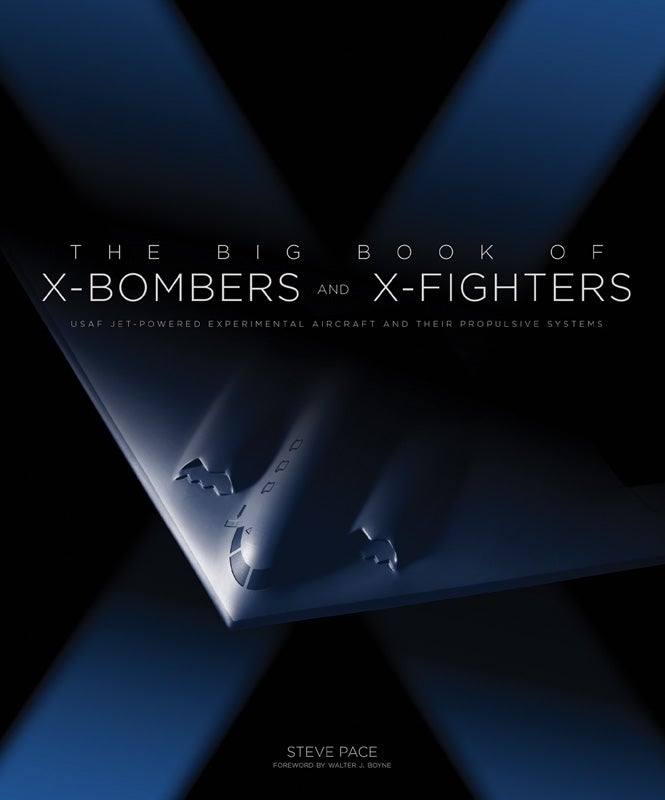