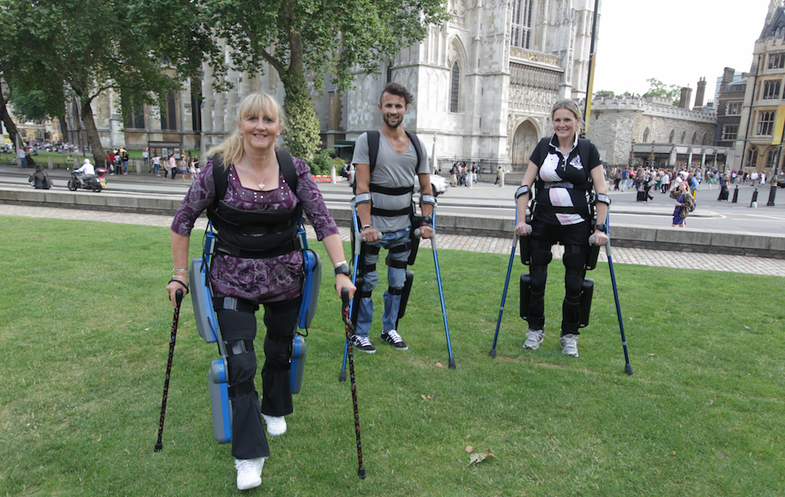 A motorized exoskeleton, designed to help paralyzed people walk again, just earned U.S. Food and Drug Administration approval. It is the first such device to do so.

The device, called ReWalk, straps on user’s bodies and helps those with certain spinal-cord injuries to sit, stand, and walk. Users have to wear a backpack to carry the ReWalk’s computer and battery. They also have to wear a wrist device with buttons to tell the motorized legs when to stand up, sit down, or start walking. But it’s not like users are punching every step into their wrist controllers–ReWalk legs also respond to movements of the user’s torso, so that leaning forward triggers a step. (Popular Science gave the device an Invention Award in 2009 and a Best of What’s New award in 2011.)

The new FDA approval means ReWalk‘s maker, Argo Medical Technologies, or Argo, can now market its products in the U.S. Over the past few years, Argo and other companies that make similar products have tested their exoskeletons on people. Argo has previously sold ReWalk devices to rehabilitation centers in the U.S. but the FDA approval marks the start of sales of ReWalk devices to Americans for private use. Each device will likely cost $65,000 to $68,000, the Telegram reported in March.

The FDA’s announcement about ReWalk details what it is—and isn’t—cleared for. It’s approved for specific spinal cord injuries, but it’s not recommended for people with other severe neurological injuries. The FDA also says users should undergo training before strapping the ReWalk on, and so should a helper for the user—maybe a spouse or a home health aide. Interestingly, the announcement also says the device isn’t for climbing stairs. This is a departure from some earlier news reports about the ReWalk, which showed users going up stairs in the exoskeleton. Once Argo starts selling ReWalks, it will have to gather data about problems with the device that crop up and submit that data to the FDA.

The agency reviewed a few studies of the device before offering its approval. The studies included 30 volunteers altogether and assessed how far users could walk using the ReWalk and how they fared in crowded places and on uneven surfaces. In one study of 12 volunteers, all were able to walk 50 to 100 meters without help. Some reported they had an easier time going to the bathroom afterward. The FDA announcement didn’t specify who ran these studies, but normally, they’re paid for by companies themselves.

So, ReWalk is the first company to get FDA approval for its walking exoskeleton. Now a few companies and academic research teams that are working on similar products may soon follow. In the more distant future, companies may advance enough to try with the next generation of exoskeletons–ones that are controlled by people’s thoughts, instead of by tilts of the torso or buttons on a wristband.