After Supreme Court Defeat, Aereo Plans To Return As A Cable Company

A logical change, since the court ruled that what Aereo was doing was illegal, unless it is cable. 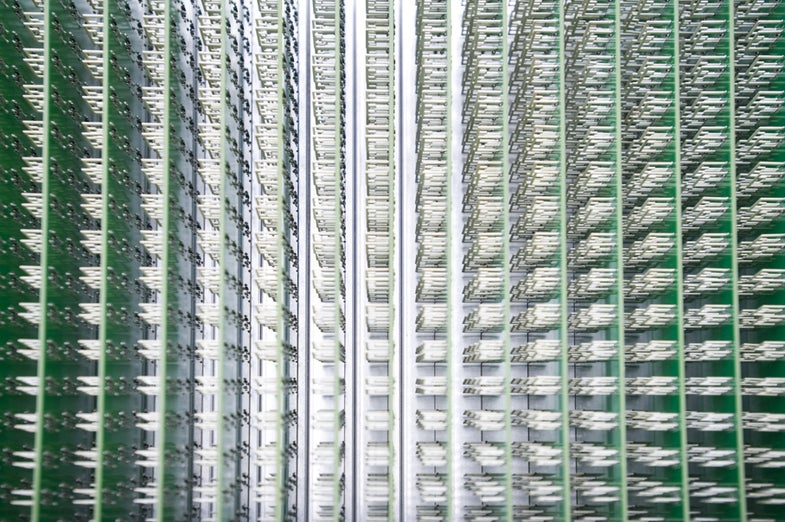 Last month, online television company Aereo lost in a major case before the Supreme Court. The Court’s 6-3 decision in ABC v. Aereo treated the company, and its unique antenna arrays, as just another cable network. In court documents filed yesterday, Aereo argues that it’s allowed to keep operating. Only this time, Aereo will explicitly be a cable company.

Here’s how the technology of Aereo works. An Aereo user logs into Aereo online, and selects a show they would like to watch. If the show is currently airing, a dime-sized antenna in Aereo’s Chicago warehouse picks up the signal from over the air, and then streams that show to the customer at home. If the show hasn’t aired yet, the customer can use Aereo like a DVR, and record the show with their little antenna to watch later. In essence, Aereo is a broadcast television antenna rented over the internet, with included storage.

While a previous court affirmed Aereo’s right to opterate that way, the Supreme Court instead found that Aereo was basically a cable company. In the statement filed yesterday, Aereo accepted this new status, and argued they should now be allowed to operate like a cable company. Here’s the key part of Aereo’s statement:

Aereo has been careful to follow the law, and the Supreme Court has announced a new and different rule governing Aereo’s operations last week. Under the Second Circuit’s precedents, Aereo was a provider of technology and equipment with respect to the near-live transmissions at issue in the preliminary injunction appeal. After the Supreme Court’s decision, Aereo is a cable system with respect to those transmissions. No additional discovery is needed to decide the Section 111 question, and its resolution at the threshold will eliminate the need to litigate, and take discovery with respect to, a wide swath of issues in the case.

It’s unclear exactly how this will play out, though Aereo is arguing for the right to operate the same service they were before, but now under different legal rules.

This is a drastic change for the company, but one that makes sense in light of the Court’s decision. The rules for renting an antenna that catches over-the-air broadcast television from another company over the internet are vague, and in ABC v. Aereo_,_ the court compared it to test driving a car instead of using a valet service. The dissent, written by Justice Antonin Scalia, instead called Aereo “a copy shop that provides its patrons with a library card.” Treating Aereo as a separate technology required the court to bend metaphors in an effort to understand it.

The ruling in ABC v. Aereo wasn’t decided on the basis of Aereo being a copy shop or Aereo being a valet service. Instead, Justice Stephen Breyer treated Aereo like a cable company. And so, while Aereo argued previously that they were not, in light of this ruling, Aereo has now expressed its intent to operate under the already-defined rules for cable companies. At the same time, Aereo is urging its subscribers and supporters to contact Congress and argue that access to over-the-air broadcasts, key to its previous business model, remains an American right.