These 1950s experiments showed us the trauma of parent-child separation. Now experts say they’re too unethical to repeat—even on monkeys.

A childhood without affection can be devastating, even if basic needs are met. 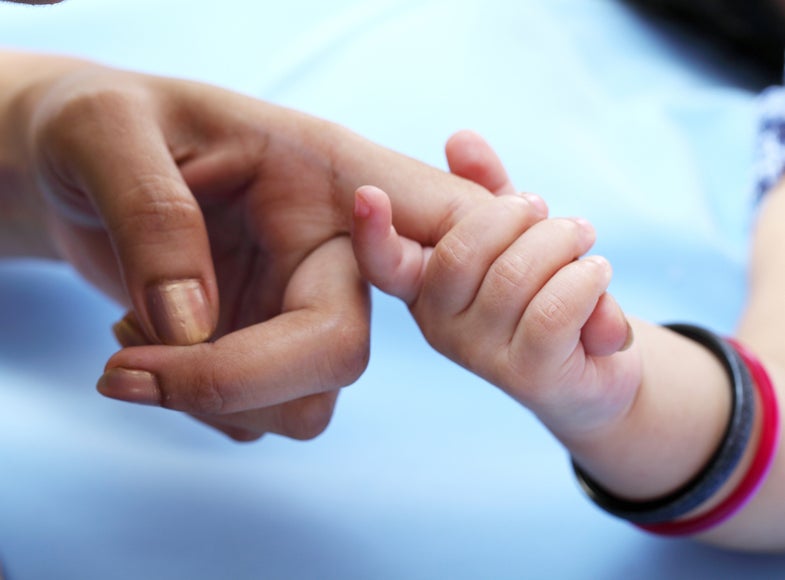 Laboratory research on the parent-infant bond among monkeys began in earnest in the 1950s. Deposit Photos
SHARE

John Gluck’s excitement about studying parent-child separation quickly soured. He’d been thrilled to arrive at the University of Wisconsin at Madison in the late 1960s, his spot in the lab of renowned behavioral psychologist Harry Harlow secure. Harlow had cemented his legacy more than a decade earlier when his experiments showed the devastating effects of broken parent-child bonds in rhesus monkeys. As a graduate student researcher, Gluck would use Harlow’s monkey colony to study the impact of such disruption on intellectual ability.

Gluck found academic success, and stayed in touch with Harlow long after graduation. His mentor even sent Gluck monkeys to use in his own laboratory. But in the three years Gluck spent with Harlow—and the subsequent three decades he spent as a leading animal researcher in his own right—his concern for the well-being of his former test subjects overshadowed his enthusiasm for animal research.

Since the 1990s, Gluck’s focus has been on bioethics; he’s written research papers and even a book about the ramifications of conducting research on primates. Along the way, he has argued that continued lab experiments testing the effects of separation on monkeys are unethical. Many of his peers, from biology to psychology, agree. And while the rationale for discontinuing such testing has many factors, one reason stands out. The fundamental questions we had about parent-child separation, Gluck says, were answered long ago.

The first insights into attachment theory began with studious observations on the part of clinicians.

Starting in the 1910s and peaking in the 1930s, doctors and psychologists actively advised parents against hugging, kissing, or cuddling children on the assumption such fawning attention would condition children to behave in a manner that was weak, codependent, and unbecoming. This theory of “behaviorism” was derived from research like Ivan Pavlov’s classical conditioning research on dogs and the work of Harvard psychologist B.F. Skinner, who believed free will to be an illusion. Applied in the context of the family unit, this research seemed to suggest that forceful detachment on the part of ma and pa were essential ingredients in creating a strong, independent future adult. Parents were simply there to provide structure and essentials like food.

But after the end of World War II, doctors began to push back. In 1946, Dr. Benjamin Spock (no relation to Dr. Spock of Star Trek) authored Baby and Child Care, the international bestseller, which sold 50 million copies in Spock’s lifetime. The book, which was based on his professional observation of parent-child relationships, advised against the behaviorist theories of the day. Instead, Spock implored parents to see their children as individuals in need of customized care—and plenty of physical affection.

At the same time, the British psychiatrist John Bowlby was commissioned to write the World Health Organization’s Maternal Care and Mental Health report. Bowlby had gained renowned before the war for his systematic study of the effects of institutionalization on children, from long-term hospital stays to childhoods confined to orphanages.

Published in 1951, Bowlby’s lengthy two-part document focused on the mental health of homeless children. In it, he brought together anecdotal reports and descriptive statistics to paint a portrait of the disastrous effects of the separation of children from their caretakers and the consequences of “deprivation” on both the body and mind. “Partial deprivation brings in its train acute anxiety, excessive need for love, powerful feelings of revenge, and, arising from these last, guilt and depression,” Bowlby wrote. Like Spock, this research countered behaviorist theories that structure and sustenance were all a child needed. Orphans were certainly fed, but in most cases they lacked love. The consequences, Bowlby argued, were dire—and long-lasting.

The evidence of the near-sanctity of parent-child attachment was growing thanks to the careful observation of experts like Spock and Bowlby. Still, many experts felt one crucial piece of evidence was missing: experimental data. Since the Enlightenment, scientists have worked to refine their methodology in the hopes of producing the most robust observations about the natural world. In the late 1800s, randomized, controlled trials were developed and in the 20th century came to be seen as the “gold standard” for research—a conviction that more or less continues to this day.

While Bowlby had clinically-derived data, he knew to advance his ideas in the wider world he would need data from a lab. But by 1947, the scientific establishment required informed consent for research participants (though notable cases like the Tuskegee syphilis study violated such rules into at least the 1970s). As a result, no one would condone forcibly separating parents and children for research purposes. Fortunately, Bowlby’s transatlantic correspondent, Harry Harlow, had another idea.

Over the course of his career, Harlow conducted countless studies of primate behavior and published more than 300 research papers and books. Unsurprisingly, in a 2002 ranking the impact of 20th century psychologists, the American Psychological Association named him the 26th most cited researcher of the era, below B.F. Skinner (1), but above Noam Chomsky (38). But the (ethically-fraught) experiments that cemented his status in Psychology 101 textbooks for good began in earnest only in the 1950s.

Around the time Bowlby published WHO report, Harlow began to push the psychological limits of monkeys in myriad ways—all in the name of science. He surgically altered their brains or beamed radiation through their skulls to cause lesions, and then watched the neurological effect, according to a 1997 paper by Gluck that spans history, biography, and ethics. He forced some animals to live in a “deep, wedge-shaped, stainless steel chambers… graphically called the ‘pit of despair'” in order to study the effect of such solitary confinement on the mind, Gluck wrote. But Harlow’s most well-known study, begun in the 1950s and carefully documented in pictures and videos made available to the public, centered around milk.

To test the truth of the behaviorist’s claims that things like food mattered more than affection, Harlow set up an experiment that allowed baby monkeys, forcibly separated from their mothers at birth, to choose between two fake surrogates. One known as the “iron maiden” was made only of wire, but had bottles full of milk protruding from its metal chest. The other was covered in a soft cloth, but entirely devoid of food. If behaviorists were right, babies should choose the surrogate who offered them food over the surrogate who offered them nothing but comfort.

As Spock or Bowlby may have predicted, this was far from the case.

“Results demonstrated that the monkeys overwhelmingly preferred to maintain physical contact with the soft mothers,” Gluck wrote. “It also was shown that the monkeys seemed to derive a form of emotional security by the very presence of the soft surrogate that lasted for years, and they ‘screamed their distress’ in ‘abject terror’ when the surrogate mothers were removed from them.” They visited the iron maiden when they were too hungry to avoid her metallic frame any longer.

As anyone in behavioral psychology will tell you, Harlow’s monkey studies are still considered foundational for the field of parent-child research to this day. But his work is not without controversy. In fact, it never has been. Even when Harlow was conducting his research, some of his peers criticized the experiments, which they considered to be cruel to the animal and degrading to the scientists who executed them. The chorus of dissenting voices is not new; it’s merely grown.

Animal research today is more carefully regulated by individual institutions, professional organizations like the American Psychological Association and legislation like the Federal Animal Welfare Act. Many activists and scholars argue research on primates should end entirely and that experiments like Harlow’s should never be repeated. “Academics should be on the front lines of condemning such work as well, for they represent a betrayal of the basic notions of dignity and decency we should all be upholding in our research, especially in the case of vulnerable populations in our samples—such as helpless animals or young children,” psychologist Azadeh Aalai wrote in Psychology Today.

Animal studies have not disappeared. Research on attachment in monkeys continues at the University of Wisconsin at Madison. But animal studies have declined. New methods—or, depending on how you look at it, old methods—have filled the void. Natural experiments and epidemiological studies, similar to the kind Bowlby employed, have added new insight into the importance of “tender age” attachment.

Romanian orphanages established after the fall of the Soviet Union have served as such a study site. The facilities, which have been described as “slaughterhouses of the soul”, have historically had great disparities between the number of children and the number of caregivers (25 or more kids to one adult), meaning few if any children received the physical or emotional care they needed. Many of the children who were raised in these environments have exhibited mental health and behavioral disorders as a result. It’s even had a physical effect, with neurological research showing a dramatic reduction in the literal size of their brains and low levels of brain activity as measured by electroencephalography, or EEG, machines.

Similarly, epidemiological research has tracked the trajectories of children in the foster care system in the United States and parts of Europe to see how they differ, on average, from youths in a more traditional home environment. They’ve shown that the risk of mental disorders, suicidal ideation and attempts, and obesity are elevated among these children. Many of these health outcomes appear to be even worse among children in an institutional setting, like a Romanian orphanage, than children placed in foster care, which typically offers kids more individualized attention.

Scientists rarely say no to more data. After all, the more observations and perspectives we have, the better we understand a given topic. But alternatives to animal models are under development and epidemiological methodologies are only growing stronger. As a result, we may be able to set some kinds of data—that data collected at the expense of humans or animal—aside.

When it comes to lab experiments on parent-child attachment, we may know everything we need to know—and have for more than 60 years. Gluck believes that testing attachment theory at the expense of primates should have ended with Harry Harlow. And he continues to hope people will come to see the irony inherent in harming animals to prove, scientifically, that human children deserve compassion.

“Whether it is called mother-infant separation, social deprivation, or the more pleasant sounding ‘nursery rearing,'” Gluck wrote in a New York Times op-ed in 2016, “these manipulations cause such drastic damage across many behavioral and physiological systems that the work should not be repeated.”