The weirdest things we learned this week: underwater horse videos, the call of the void, and an ill-fated, icy balloon trip 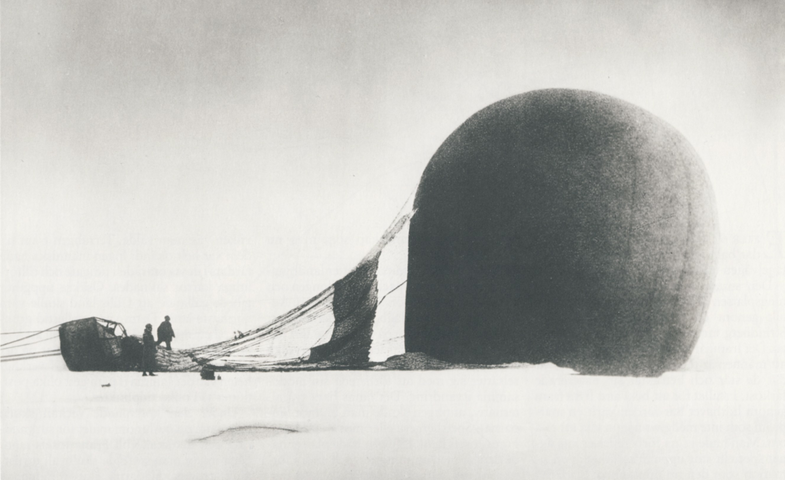 S. A. Andrée and Knut Frænkel with the crashed balloon on the pack ice, photographed by the third expedition member, Nils Strindberg. The exposed film for this photograph and others from the failed 1897 expedition was recovered in 1930. Public Domain
SHARE

In this week’s podcast, we discuss the invention of underwater motion picture techniques. In the early 20th century, on a quest to find a big story and make himself famous, journalist J. Earnest Williamson set out to capture the first movie footage under the sea. All he had to do was kill a horse—and fight a shark to the death.

Here’s a glimpse of this (somewhat horrifying) film:

Want to see the footage in action? Look for “Experimentals: Nautiluses” on PopSci’s YouTube channel starting Thursday, June 7. It’s variations on the theme of the nautilus: the origins of memory, math, and the mysteries of the deep. And of course, one of the most famous Nautiluses of all—the vessel featured in Jules Verne’s 20,000 Leagues Under The Sea, which would inspire the first major motion picture filmed underwater. And, of course, the unusual shark shot that made it all possible.

Fact: When you stand at the edge of a great height, it’s normal to suddenly want to jump

Have you ever heard of ‘L’appel du vide’? French for the appeal of the void, this refers to the sensation of wanting to plunge into an abyss—specifically, when you have no suicidal ideation or conscious reason to want to jump. Have you ever suddenly become concerned that you might jump from a great height, even though you have absolutely no desire to do so?

In a small 2012 study that dubbed the feeling the “High Place Phenomenon,” Jennifer Hames and colleagues found that over 50 percent of students surveyed who reported never considering suicide also reported that they’d felt the urge to jump from a high place at least once. We can’t draw any sweeping conclusions from a survey of a few hundred students, but Hames suggested at the time that this might be the case of some crossed wires. Perhaps, she posited, our lightning-quick reaction of fear and self-protectiveness is confusing to our slower, more conscious thoughts. For example: If I stood waiting for the subway behind the yellow safety line, but suddenly felt a surge of vertigo and the need to step back, well, that wouldn’t be a very rational reaction. I’m not in danger of slipping in if I’m standing two feet away from the edge. Perhaps, Hames’ theorizing goes, my brain can only explain this protective instinct by inventing a danger. Perhaps my brain rationalizes its sudden fear of the height by concluding I must have been considering taking the plunge.

In summary: Wow, brains are weird.

Of course, with one study on the phenomenon (and a survey-based study at that—nobody took their student subjects out to a cliff and asked them to describe their feelings on the precipice) it’s impossible to say whether this is the case. When that research came out in 2012, some outside experts suggested alternative explanations. Maybe, as many humans are prone to seeking adrenaline rushes, we simply note the opportunity for a thrilling free fall before quickly realizing how foolish it would be to jump. Perhaps we briefly, unconsciously question whether the thing that makes it worth it for us to stand close to the edge might in fact be worth the risk of going over the edge—a holdover from the time when standing near a big drop was more likely to be about harvesting seabird eggs or running from a predator than waiting for the D train.

A sudden pull from the void isn’t the only brief, disturbing thought a healthy brain can have, and many such feelings are totally normal. But if you feel plagued by destructive or violent thoughts, you should seek out the help of a therapist, or at least a trusted friend. And of course, while many of us experience the high place phenomenon, it should not present itself as more than a brief, surprising, completely avoidable urge to get closer to the edge. If you feel strongly compelled to jump from dangerous heights, reach out to the National Suicide Prevention Lifeline via online chat or at 1-800-273-TALK (8255).

FACT: Ballooning over the North Pole is a bad idea

The balloon in the picture was lying on its side like a beached whale. It was massive, dominating the old-timey photograph, and dwarfing the two people standing nearby the grounded behemoth. When that crossed my twitterfeed, I had to know more, and I went on a deep dive into the strange and mysterious events of 1897: when three men tried to fly across the North Pole in a hydrogen balloon.

Be warned (like I did not warn my co-hosts this week—sorry Rachel!) the story of these Swedish adventurers is less Wright Brothers and more Icarus. But it’s still a fascinating look into this time period, when people were putting their lives on the line in pursuit of the glory of a successful trip to the coldest areas of the world. If you want more, and are into the idea of reading a chilling account on a hot day, Alec Wilkinson has the most recent and detailed account of the entire pursuit in The Ice Balloon: S. A. Andree and the Heroic Age of Arctic Exploration.