Should parents lie to kids about Santa Claus? We asked the experts. 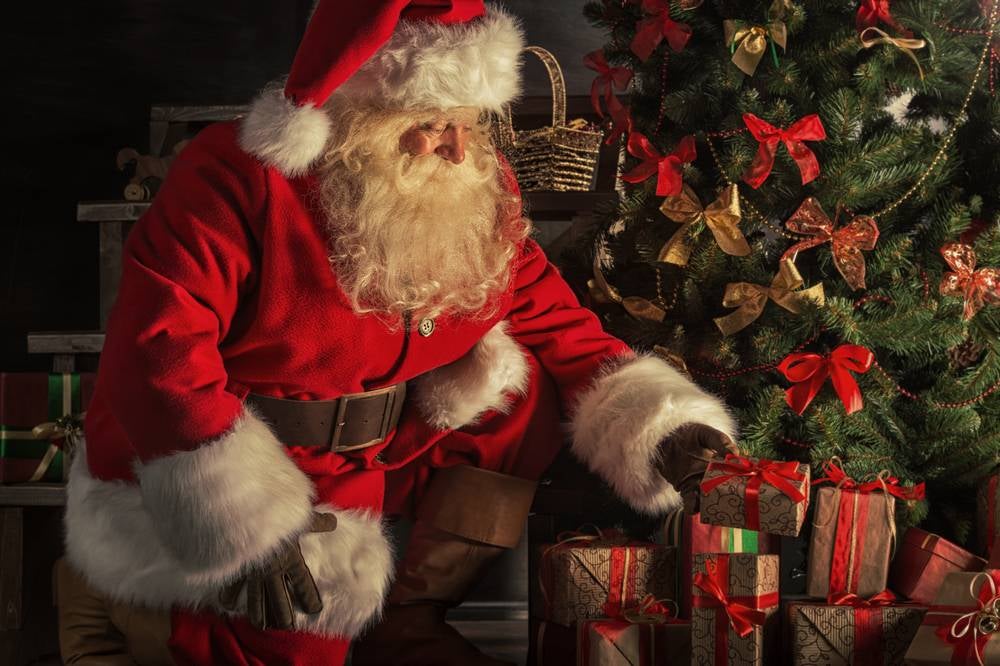 ‘Twas the night before Christmas and all through the house, not a creature was stirring—except for your conscience.

Rosy-cheeked Santa Claus may be the physical embodiment of holiday cheer, but the snow-coated fantasy of the big guy in the red suit isn’t without tension. Between eggnog and Christmas carols, parents are plagued by philosophical and psychological considerations: Should you share seasonal untruths about that portly fellow from the North Pole in the first place? And if you do, when is the right time to confess no one’s shimmying down chimneys to deliver gifts—that there was never anything magical about Christmas morning at all?

The myth of Old Saint Nick stretches back more than 1,500 years and incorporates a kaleidoscopic mix of Christian saints, literature, and paganism. But our modern conception of a jolly man on a reindeer sleigh solidified only in the last 200 years, with stories like the 1823 poem “A Visit From St. Nicholas,” better known as “The Night Before Christmas.” These days, Santa-based rituals have permeated American secular culture broadly. In 2017, a whopping 85 percent of 4-year-olds in the United States said they believe.

Despite Kris Kringle’s omnipresence, experts are divided about the benefits of Clausian mythology or, as David Kyle Johnson, a professor of philosophy at King’s College in Pennsylvania and the author of The Myths That Stole Christmas, calls it, “the Santa lie.”

“The thing I’m objecting to is promoting literal belief in Santa Claus,” he told me over the phone shortly before Thanksgiving. In his book, Johnson, whose expertise is in formal logic, lays out an ethical argument against indoctrinating children in Big Santa. His biggest concern is that such myths discourage critical thinking. If kids begin to ask questions or express skepticism in Santa, many parents pull out reams of “proof,” from old-timey articles (“Yes, Virginia, there is a Santa Claus”) to NORAD’s Santa Tracker, the U.S. Military-run site that “tracks” Santa across the globe. Even Siri won’t give a straight answer.

It’s all pretty cute—but Johnson believes such tactics promote credulous thinking. “When we say, despite the evidence, they should believe anyway, that’s a very dangerous precedent to set,” Johnson says. Instead, he advocates for sharing the story of Santa as just that—a story. “We still go to see Santa Claus at the mall,” he says. “Last year, my kid was 4 years old, and I told him, ‘We’re going to see Santa Claus, he’s just a guy in a costume, but it’s just a fun game we’re going to play.’” According to Johnson, they had a great time, no deceit required.

Critical thinking skills aren’t the only thing at risk, according to Johnson. Most Santa-loving kids turn out OK, but The Myths That Stole Christmas features about a dozen anecdotes from people who link the Santa reveal—that moment they realized this whole “Amazon Prime but with sleighs” system wasn’t possible—to distrust of their parents and even painful psychological trauma.

This is far from a peer-reviewed body of evidence, so no one is arguing that your kids will be irreparably scarred once the jig is up. But it’s fair to say that some youths will be displeased or unsettled upon realizing the truth. Children “are curious about the world, want to know about it, and trust their parents to provide them with accurate information,” Johnson writes. “When we tell them the Santa Claus lie, we betray that trust.”

Cyndy Scheibe sees it differently. “To me, it’s not a lie so much as a story,” she says. A professor of psychology at Ithaca College and executive director of Project Look Sharp, a media literacy organization, Scheibe has been researching children’s belief in Santa Claus for more than 30 years. She remains an avid proponent of these frosty fables. When I wrote her requesting an interview she responded, “Sure, happy to talk about Santa Claus any time.”

Scheibe’s decades-long Santa scholarship began in grad school, when she was performing as a Christmas elf. “Very little kids are afraid of Santa Claus, but most kids, up until the age of 7 or so, are just delighted. ‘This is Santa!’,” she recalls. “But then there were kids, usually between the age of 7 and 9 or so, and they were suspicious, and they were there to collect data on whether this guy was real or not real. The look on their faces was so different.”

Scheibe was determined to know why. In three “waves” of data collection over several decades, she has discovered that kids are remarkably similar across generations. “We always found the same thing: that the average age is between 7 and 8,” she says, and “that kids go from believing to not believing, but it is a transition that probably takes a couple of years.” Even the dawn of the internet, where you could theoretically find the truth with a single click, hasn’t disrupted this cycle.

The tipping point between believing tots and unbelieving bambinos seems to correlate with something called “concrete operational thinking,” an essential stage in Swiss psychologist Jean Piaget’s theory of cognitive development. As kids get older, Piaget theorized, their thinking grows more organized. Once happy with strings, they now want tight, logical connections between things.

Santa doesn’t hold up to such sophisticated scrutiny. Everyone grew up knowing at least one kid who believed into high school, but by 12, most children have decided reindeer can’t fly, one man can’t be in every chimney in the world at once, or otherwise identified some hole in this society-wide plot. “I call it being little scientists,” Scheibe says. “Little kids just say, ‘magic,’” but older kids want something airtight.

Comparing Johnson’s ethical apples and Scheibe’s observational oranges is tricky—and every family must define their traditions themselves. But talking with each of them about their academic passion for Santa, I came to this Christmastime conclusion: Johnson’s fear that Saint Nicholas promotes specious thinking is valid, but only if you set kids up for that kind of failure. Scheibe’s data suggests installing a belief in Santa Claus is a safe bet, so long as you answer a maturing child’s honest questions honestly.

It’s a fine story to tell tots, should you so choose, but you must be prepared to let the game go as soon as your children start poking holes in the idea. In other words: don’t relish in keeping up the con. “I can tell you, in all the research I did, [trauma and broken trust] came up rarely, but occasionally,” Scheibe says. “From what I could tell, that’s most likely to occur when the child is told outright, without asking, or when the parents continue perpetuating the myth when the child is ready to let go.”

And what about those stragglers, the high-school-bound true believers? As Christmas approaches, Scheibe says, be strategic but delicate. Start deemphasizing Santa’s role in Christmas, and share more about the part you play in ensuring there are presents under the tree. If your kid isn’t asking questions—you can. On your visits to the mall, gently inquire about what they believe, and why. “Then the conversation can include the parent gently explaining the difference between believing in Santa as an idea, and who actually fills the stockings,” Scheibe says. And don’t forget to emphasize that the story can continue: now, she says, you “get to be Santa for others.”