Your kitchen towels are probably gross, but so is your whole life

Bacteria is everywhere—just keep the bad stuff at bay. 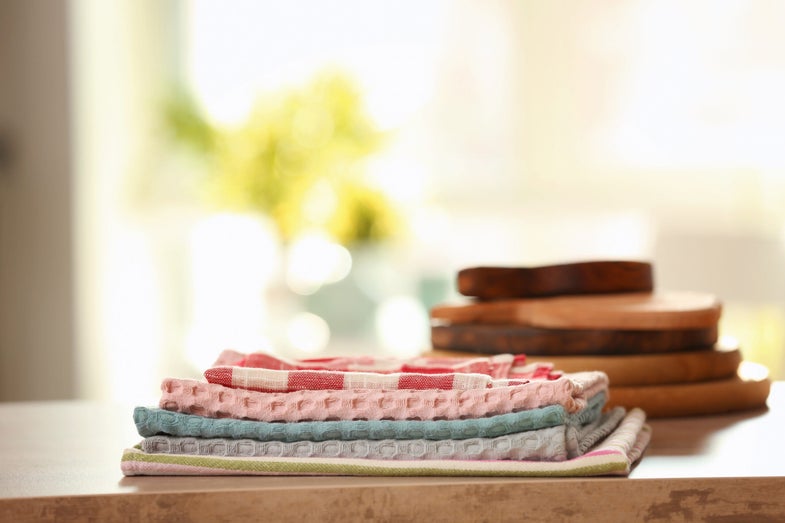 “Your kitchen towels could give you food poisoning, study suggests,” “Do you know what’s growing on your kitchen towels?” “Beware of your kitchen towel,”—these are just a few of the tea towel-related headlines that made the rounds this weekend. A press release from the American Society for Microbiology was picked up by news outlets from USA Today to CNN, prompting these doomsaying headlines, but the story itself is nothing new. Your kitchen, like all kitchens, is kind of grotty—and research indicates that the humble kitchen towel may be the grottiest thing in it that you regularly touch. But it’s important to remember that most of the planet is teeming with bacteria, and most of them don’t do much to bug you.

The ASM press release summarized a new study from researchers at the University of Mauritius, who presented their findings at a microbe conference held this weekend in Atlanta, Georgia. The study, presented on Saturday, has not yet been published—at this point, the only thing available for other scientists to critique is the abstract, which outlines the research methods and results. However, its results line up with other peer-reviewed kitchen microbe studies.

According to the study abstract, which was provided to Popular Science by the ASM, lead author Susheela Biranjia-Hurdoyal and colleagues concluded that “kitchen towels could be [a] very important source [of] bacterial contamination which could contribute to food poisoning.”

The researchers reached this conclusion by culturing bacteria from 100 kitchen towels collected after a full month of regular use and washing. They also had the towel’s users fill out a questionnaire about their living conditions. Based on this evidence, the researchers report bacterial growth on 49 percent of the towels. Specimens from large families—and especially families with children—had more bacteria on them, while wet towels were more likely to have coliform bacteria (the family that E. coli comes from). Coliforms and staph bacteria were also more prevalent on towels that came from meat-eating families.

Their results echo a 2014 study on bacterial occurrence in kitchen towels published in the journal Food Protection Trends, says Drexel University scientist Jennifer Quinlan, who was not involved with either study. That paper from University of Arizona scientists looked at 82 kitchen hand towels from households in Canadian and U.S. cities, and also included a questionnaire about living conditions. They found E. coli on almost 26 percent of towels, while coliform bacteria in general showed up on 89 percent.

Without a look at the full paper, Quinlan says, she wouldn’t want to draw conclusions about the new study’s methods or fully assess its conclusions. Quinlan also has questions—for example, she says, she would have expected bacteria on one hundred percent of the towels, not just under fifty. And while the abstract discusses coliform bacteria, it doesn’t specifically identify E.coli—only the AMR press release does that.

However, she says, none of the findings in and of themselves were very surprising. The new study indicates that many people use kitchen towels for multiple things, from drying hands to wiping up spills, and that they frequently don’t give towels enough time or space to dry out. “Humid towels and multipurpose usage of kitchen towels should be discouraged. Bigger families with children and elderly members should be especially vigilant to hygiene in the kitchen,” Biranjia-Hurdoyal said according to the AMR press release.

Add these results with another 2014 study published in Food Protection Trends, in which researchers from Kansas and Iowa State Universities found that cloth kitchen towels were the most frequently handled contaminated surface in the kitchen, and it’s clear that kitchen textiles are something to keep an eye on. But there’s no cause for alarm: most microbes are harmless, and simple safe food-handling practices can help keep more dangerous bacteria in their place.

Quinlan says changing kitchen hand towels regularly, washing hands frequently, and not using kitchen towels for more than one purpose are all basic practices that can reduce the chances of bacteria getting out of control and family members contracting food poisoning. The other big thing is moisture: try to put kitchen towels somewhere they’ll get the chance to dry between uses. The USDA has further advice on this front.