Hibernation, unfortunately, is not a healthy option for humans. 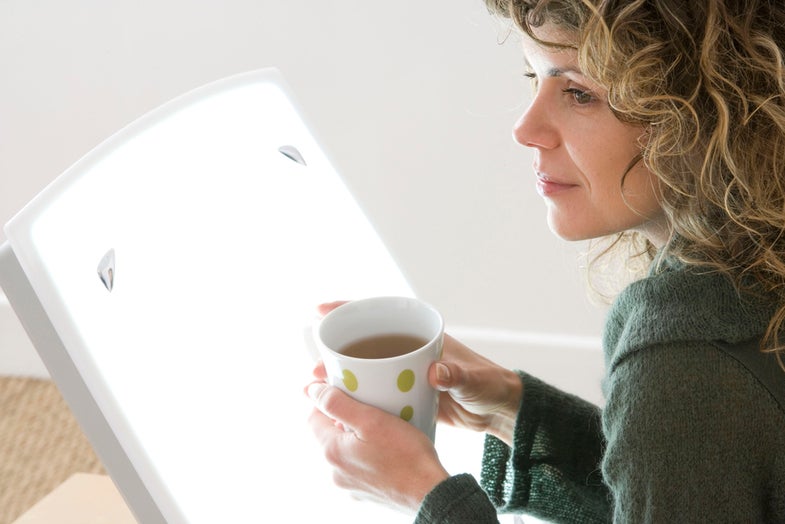 Model. Light therapy lamps emit white light imitating daylight. They are used, between among other things, to fight against seasonal affective disorder. B. BOISSONNET / BSIP
SHARE

Each winter, as the days grow darker, approximately 5 percent of Americans suffer from something called seasonal affective disorder. Tragicomically called “SAD,” the condition is similar to what a bear might experience if he laid down to hibernate, only to remember he had kids, errands, and a full-time job, all requiring him to get out of bed the next morning—and every morning after. Fortunately, interventions for humans are widely available.

Symptoms of seasonal affective disorder fall under the dark umbrella of depressive behaviors, but occur only in winter (or, less commonly, in summer) instead of year-round. You may struggle to get up in the morning, even after a long night of deep sleep. Over the course of the day, you may exhausted by routine things, and resist socialization. Your appetite may seem suddenly insatiable. Weight gain is common.

At a chemical level, what exactly triggers these SAD feelings is poorly understood. Scientists hypothesize that changes in the amount of available sunlight triggers hormonal changes, which manifest as seasonal depression in some people with certain genetic profiles. In a state like Florida, which is nearer the equator than the rest of the country, only 1 percent of people report SAD-like symptoms in the winter, compared to as many as 9 percent of Alaskans living in northern latitudes.

Seasonal affective disorder spikes in winter, when sensitive individuals wither from a lack of sun, but experts say some people experience summertime SAD, when rays are almost omnipresent. “Affected individuals seem to have disrupted daily (circadian) rhythms,” according to the National Institutes of Health. “These individuals cannot alter their sleep-wake cycle to match the night-day cycle of the winter [or summer] months, resulting in changes in sleep, mood, and behavior.”

Tell me what to do about it!

Light therapy requires only a broad-spectrum light and a bit of patience. Often called a “happy lamp,” these devices offer UV-filtered LED white light bulbs. This doesn’t replicate the sun’s rays exactly, but the lamp should be enough to lift your spirits. For the most effective intervention, the afflicted individual should sit approximately two feet away from the lamp each morning—far enough not to sear your eyeballs, but close enough to really absorb the artificial rays. After a 10 or 15 minute soak, turn the light off, and start again the next day. Over a few days, this practice can stand in for a tuned circadian watch and lessen the discomfort of SAD.

People who don’t see improvement can up the “dose” to 30 or 45 minutes of broad-spectrum light each day. But it’s important not to overdo it. Happy lamps are similar to the light emanating from a phone screen or laptop. If you use it later in the day, it could keep you up at night, throwing your circadian rhythms further out of whack. It’s also not necessarily something to use every day for the rest of your life. One meta-analysis found it effective for treating SAD when administered for two to five weeks during the darkest months.

For people with more mild symptoms, dawn simulation might do the trick. These bedside devices replace the aggressive beep of a traditional alarm clock with a clever light. If you want to get up at 6:30 a.m., the dawn simulator will switch on at a low level 30 minutes early, and grow steadily brighter until you wake up, feeling like the sun’s in your room. Studies show that, similar to a happy lamp, this helps to reduce the severity of seasonal depression by mimicking natural processes your body understands.

These strategies can help people cope with the worst of the wintertime blues, though more isn’t always better. Studies show that both light therapy and dawn simulation are not effective for people already on antidepressants, suggesting there’s a point of diminishing returns with SAD treatments. That’s why it’s important to talk to your doctor: to find out how severe your symptoms are, and what the right intervention is for you.