These are some of the design tricks that keep us hooked. 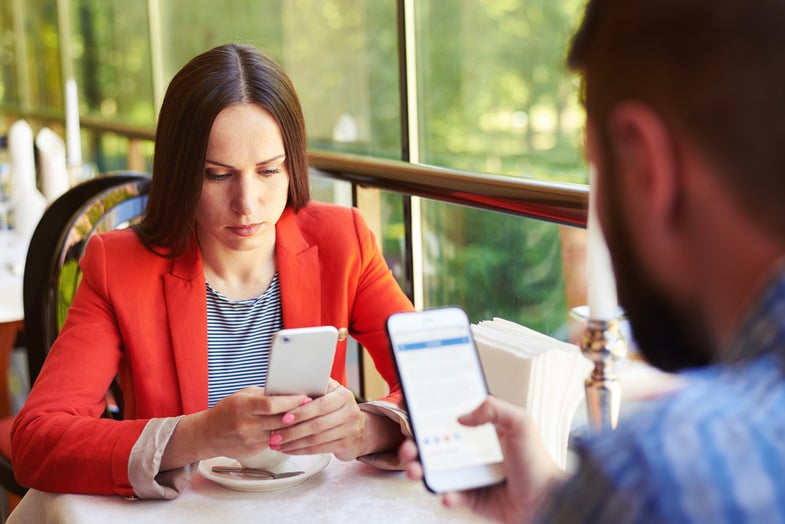 concept photo of smartphone addiction. young woman and man sitting in cafe with smartphone and do not looking at each other.
SHARE

Google and Apple are two of the biggest technology companies in the world. They’ve made their fortunes—and gained global dominance in the process—by encouraging us to spend as much time as possible on our smartphones, laptops, and other devices. But in the spring of 2018, both companies announced plans to help users spend less time glued to their screens.

In May, Google announced it would be making over its entire suite of products, with many changes made in the name of moderation. “Great technology should improve life, not distract from it,” Google said in its announcement of a new Digital Wellbeing initiative. The upcoming Android P software update will introduce dashboards that give users daily insight into the amount of time they spend on their phone, including data broken down by specific apps. It will also allow users to set limits on how much time they get in a given app before the screen goes greyscale. YouTube, which is owned by Google, will soon have “custom breathers” that users can schedule at various intervals to remind them just how long they’ve been watching.

Meanwhile, Apple announced the iOS 12 will have a “Screen Time” feature, which provides similar tools. As with Android’s dashboard, iOS users will get more hard data on their usage and habits, as well as the ability to limit app usage, and customize notifications so that they are “deliver[ed] quietly” to the notification center instead of the lock screen.

Both of these initiatives sound great and they very well could help consumers take back their time. But experts in the field of addictive design are quick to note that the very companies offering Screen Time controls and Digital Wellbeing advice are the same companies that have spent decades commercializing our attention and advancing the real and vibrant field of addictive design.

To see the success of addictive design, look no further than your home screen. Each month, more than 330 million people, including the president of the United States, login into Twitter, a social media app built around 280 character “tweets.” If Twitter’s only priority was ease of use, a user’s feed would load automatically. But instead there’s a short delay: The iconic bird logo flutters on a blued-out screen as you wait for the timeline to load. Even when you’ve entered the app, Twitter serves you an older version of your feed—roughly dated to the last time you opened the app—and users have to manually push a “See new Tweets” button or scroll to rise to see the most recent tweets in the semi-chronological feed.

Most people don’t consciously register this short delay. Others who do might blame it on connectivity issues. But user experience (or UX) designers say the delay is actually perfectly designed. For many users, the delay subconsciously creates a sense of anticipation. It’s not dissimilar to a slot machine, which is intentionally designed to run through a series of possible combinations (cherry, 7, bells) before finally delivering the gambler’s results.

This sense of anticipation has well-studied effects on the brain—at least in the context of casinos. Since the 1980s, scientists have known that the neurotransmitter dopamine is a sort of chemical reward for taking action, encouraging us to anticipate rewards. Gambling is known to trigger a release of dopamine as people put money on the table, unsure they’ll be getting it back. Nicotine and heroin are two common artificial sources of dopamine, which is thought to be a major reason why these substances are addictive for many users. Humans also get a surge of the good stuff from less contentious activities, like sex and exercise (there’s a reason they call it “runner’s high”).

Recently, experts have begun to argue that substance-free activities like gaming and social media can also create cycles of reward and dependence. Increasingly it seems everything from the colors of Candy Crush to the confidence boost of a new “like” on Facebook is subtly reshaping our brains.

Numerous other UX tricks serve the same purpose. Instead of automatically loading the newest content, many apps require users pull down to refresh their feeds. Loren Brichter, the former Twitter engineer who created the pull-to-refresh, which operates much like a slot machine lever, says he has come to see the dark side of his invention. “Smartphones are useful tools,” he told The Guardian in October 2017. “But they’re addictive. Pull-to-refresh is addictive. Twitter is addictive. These are not good things.”

Similarly, the creator of the infinite scroll has soured on his own invention, despite creating it with the best intentions. “Infinite scroll… is the ability to keep scrolling and never having your brain to have the chance to catch up with your impulses,” Aza Raskin tells PopSci. “What I thought was good user experience—you know, in the sense that, every time you ask a user to make a decision they don’t care about, you fail as a designer—in reality, it wasted quite literally hundreds of millions of human hours.”

Psychologists, neuroscientists, and others are still working to establish the biological mechanisms behind addictive UX, with research focusing on dopamine and other chemical processes. But the effects of addictive design are already clear. 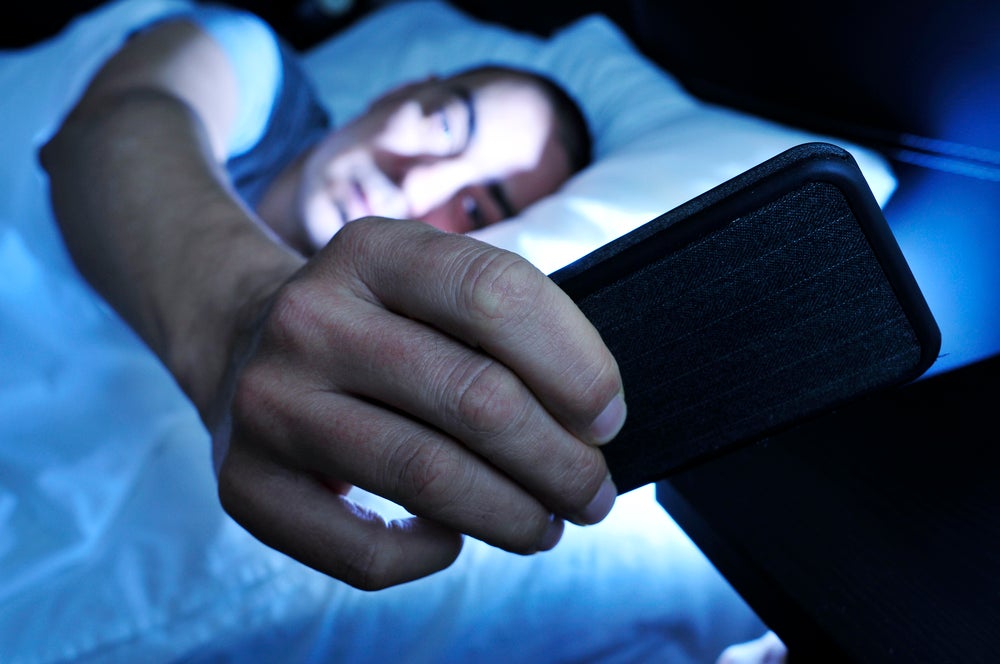 young man looking at the smartphone in bed at night

One of the iOS 12 features promoted by Apple? Updates to nighttime Do Not Disturb settings.

Adam Atler is a professor of marketing at New York University and the author of Irresistible: The Rise of Addictive Technology and the Business of Keeping Us Hooked. “As to whether [addictive design] can be effective, the data are incontrovertible,” Atler told PopSci in an email. “We spend a huge amount of our time in front of screens, dominated by the time we spend on social media platforms and other social apps.” And even when we’re not actively looking at our devices, vibrations, dings, and lit up screens try to pull us back into this digital world.

The numbers vary widely, but it appears that on average we touch, swipe, or tap our phones more than 2,000 times a day, according to a study from consumer research company dscout. Some 81 percent of Americans admit to looking at their phones during dinner, according to a 2015 survey by Deloitte. We spent approximately 5 hours of every day on our mobile devices in 2016, according to a report from the analytics firm Flurry. And most of us don’t have to think too hard to recall a situation where we’d spent more time on our phone than we’d initially intended.

One “dark pattern”, as UX designers call these subtle methods of manipulation, is based on a psychological concept called variable rewards. In the mid-20th century, B.F. Skinner, the legendary behavioral psychologist, found that pigeons would press a lever more often if food appeared irregularly, instead of on every push.

In the context of Facebook, variable rewards can mean the difference between your post being a well-liked hit, or an invisible miss. In the context of Twitter, it might mean the difference between a cornucopia of good tweets you’re excited to read and a session where nothing makes you laugh, cry, or retweet. Either way, the unpredictability itself is thrilling, earning it comparisons to slot machines, where players mostly lose but occasionally win.

It’s also unavoidable: Even if you went to LinkedIn, Facebook, or Twitter just to post your own content, you have to go through the newsfeed, as none of these sites load your profile page directly. This ensures you interact, however marginally, with the content people in your network have created.

Another way to play with users is to capitalize on completionist tendencies. While some people are content to leave 20 calls unanswered or 2,000 emails left unopened, data shows that lingering reminders of unfinished business are a good way to keep people interacting with an app or game. Unless you have modified your notification settings, Instagram will send you push notifications if someone in your network has recently joined Instagram, for example. This is rarely useful information, but the push notification is nonetheless sure to draw a user’s attention as it flashes across their smartphone screen. Even if they ignore the push notification, nagging reminders in the form of numbers in small red circles rack up until Instagram is finally opened and the notifications resolved. And, of course, people don’t typically just resolve the notifications and leave. They peek at their feed and like a photo or two.

Farmville, the Facebook-based game that was notoriously boring, capitalized on the same impulses, albeit with a side dish of social pressure. The game entails “neighbors” sending each other gifts or pitching in plowing the field. These actions send notifications to users and keep Farmville players in a “loop of reciprocity,” according to an essay by the game designer A.J. Patrick Liszkiewicz. Even if you were willing to break your social obligations, the notifications kept on coming.

Like so many features, push notifications were developed to do good. Blackberry, once the leader of the smartphone pack, started sending users notifications to their home screens when new emails arrived. Prior to this advancement, people had to manually check their phones for updates. At the time—2003, also known as the dawn of the UX revolution—Blackberry saw this as a net good. Push notifications would, in theory, reduce people’s time on their phones (much like the Screen Time and Digital Wellbeing services being promoted today) and save battery life in the process. Instead, Blackberry and its peers found that notifications pull us back in.

Once you’re there—phone in hand, swiping through an app—the cycle starts again. On Instagram, for example, you may get a ping notifying you your friend who hasn’t posted in awhile is suddenly back with a new photo. But on their way to look, users inevitable come across new Instagram stories, the short videos or passing photos that users transmit to their followers for 24 hours.

Stories live at the top of the app and reappears at various intervals throughout the Instagram news feed. Seeing what your friends are up to in near-real-time is a draw on its own, but UX designers have sweetened the deal with a small psychological trick: The circular buttons used to play the stories are highlighted in pink until they are played, when the circle turns white. The next time the app updates, played videos are gone, and ever more pulsating pink stories are waiting to be played.

The stories feature also has an autoplay function. While you might consciously click to watch a video uploaded by your close friend, the stories keep playing, until you’re watching videos by your enemies, distant cousins, and advertisers. Other video platforms, like YouTube and Netflix, work much the same way.

The strategies UX engineers use to keep us engaged may seem appropriate, even positive. After all, we want our social media, games, and other technology to be engaging and these designs help to ensure that’s the case. But increasingly, experts are urging caution. Unlike many other forms of entertainment—movies, for example—smartphones don’t have a finite end point. The credits roll after approximately two hours, but you can swipe, tweet, or play until you die.

Even more concerning, most of these clever UX efforts remain largely invisible to users. As a result, people are unable to make informed decisions about how they want to interact with social media. “Knowledge is a start, as it is with any self-control problem,” Atler wrote via email. “You don’t even try to resist what you don’t recognize as harmful.” But to truly improve our relationship with our most-used devices, Atler, Raskin, and others say the next step will be to put the phone down and devise a plan to replace these engineered impulses with healthier habits we’ve crafted ourselves. Whether that involves Screen Time, Digital Wellbeing, or throwing your phone in a river is up to you.