Climate Change Is Knocking On The Door Of Our Urban Fortresses

How should cities respond? 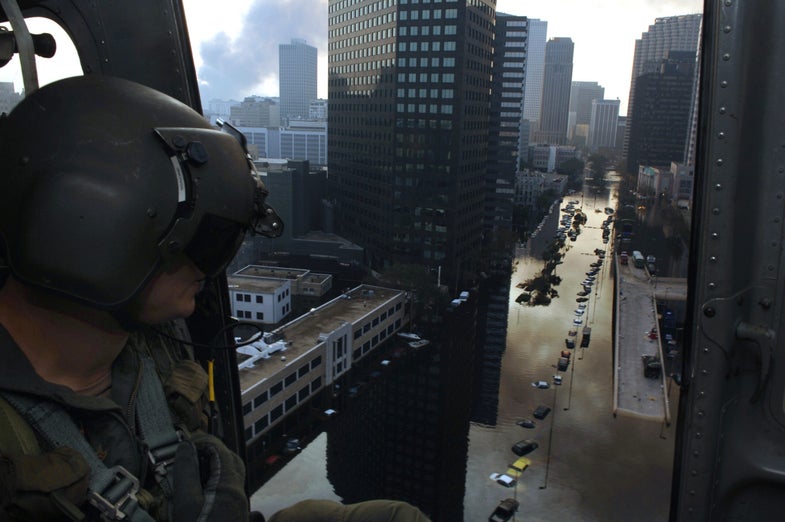 From historic flooding to the northward march of Zika-infected mosquitoes, climate risks are affecting the United States, but how prepared are local governments for such threats? Not very, according to research from George Washington University professor Sabrina McCormick. In her study “Assessing Climate Change Vulnerability in Urban America: Stakeholder-Driven Approaches“, McCormick conducted extensive interviews with a range of city planners in cities across the country. What she found is that few are ready for the challenges they already face, and planning is wildly inconsistent from city to city. In her Q and A with Nexus Media News, McCormick sheds light on the evolving crisis, and the cities that are taking this challenge head on.

How have climate experts guided city planning to date and how has that fallen short of necessary preparations?

In our research, we’re trying to get into the mechanics of how decision-makers think about climate change, and why—especially the why. What we found in this study is local decision-makers are very concerned about some climate phenomena, but at a different scale than researchers. For example, cities are more focused on projections about extreme weather events, or gradual shifts in biodiversity, or temperature changes. But what’s interesting is that decision-makers are more versatile in their thinking than experts—they’re thinking backwards and forwards, whereas experts tend to do one or the other. It makes sense when you’re on the ground and trying to understand what you should be doing to try to protect your constituents. City officials are thinking more, “We had a drought five years ago, will we have one five years from now?” So in the paper, we suggest that climate experts should think about time horizons in the way city planners do.

In addition, climate experts have come up with general trends that are important to local decision-makers, and those who have access to that information are able to make all sorts of changes. There are a lot of factors that affect whether or not city planners will take action, and one of those factors is access to information. In Boston and Los Angeles, decision-makers are working closely with some of the world’s most renowned climate experts, and that has been extremely helpful. While expert approaches do have some limitations in relevance for on-the-ground planning, when local decision-makers are able to work with experts, this can be a real catalyst to take action.

Moving forward, how should climate findings best be conveyed to cities to guide policy?

Based on what we’ve learned in different cities, there is great value in a two-way dialog between experts and local decision-makers. That can take a lot of different forms. In Boston and LA, and in a different form in Portland, there have been local forums and public hearings where people affected by climate risks have been able to speak to their concerns ask questions, and experts and decision makers can have a real exchange with these constituents. With broader climate guidance, like the Intergovernmental Panel on Climate Change (IPCC) reports, people do take the findings quite seriously, but there may be differences in applicability to one’s individual life or a local city. Local decision-makers are largely thinking about human health and infrastructure, but IPCC can only speak to those concerns in a limited way. That said, some cities are definitely beginning to take action. It’s nice to be able to show that some cities are formulating early ways to address climate, while others need a little bit of a boost.

Geography drives tremendous variation in city preparations for a warming world — what changes are universal to all cities?

In cities that have institutional support and political will and political leadership regarding climate, you see more action on both assessing vulnerability and adapting to climate change. Local awareness and advocacy also help drive activity. Action on climate appears to be related to the political leaning of a city. More conservative cities tend to have less movement. It’s an interesting finding because the next logical step is that, as the impacts of climate change continue and are exacerbated, those cities will bear a higher economic cost. Regardless of political leaning, preparation matters. Hurricane Sandy cost the New York City area approximately $65 billion. If the city had been able to bolster its systems in advance, these costs could have been vastly mitigated.

Many people think cities that have experienced disaster will be more prepared for climate changes, but that’s not necessarily true. Cities with recurring risk are only motivated about climate change if political will, leadership or public awareness drive this. Compare L.A. to Tampa: Tampa is the number one city at risk for hurricanes, but they haven’t had one in a long time, and they’re not doing much about climate. But L.A., with constant fires and drought, is doing a ton about climate change. Leaders are recognizing that their risks are related to longer-term trends. In contrast, Tampa’s biggest hospital is on a peninsula in the bay at sea-level. That hospital is not retrofitted for climate change risks.

Are there particular preparations that cities should be making now that few have addressed? Are cities in certain regions more likely to be ill-prepared, such as along coastlines, or do those governments tend to be better informed about risks?

Climate change is a global phenomenon that’s experienced locally, so it’s hard to make a universal recommendation, but having said that, there are actions that the more progressive cities have taken. For example, many have audited their greenhouse gas emissions to look at low-hanging fruit for mitigation, the key to preventing all of these risks. They are also doing vulnerability assessments, looking at who’s going to be most adversely affected by some of these impacts that are happening now. It’s important to think about climate change comprehensively and multi-sectorially. For example, human health is affected by other sectors like a reliable energy grid. Your energy grid can’t break down in a heat wave or you can’t protect human health. Cities need to think of all of these vulnerabilities, across sectors and together.

There’s tremendous diversity internationally with action and preparation on climate change. Some of the most active countries and cities internationally include Paris, London, and some places in Australia, which has long been experiencing drought and wildfire. Cities in Northern Europe that have a long history with water and flooding are also preparing for increased risk, which is something post-Sandy that some U.S. cities are learning from. That said, many cities around the world are way less resourced than U.S. cities and could really benefit from what we learn. It’s a mixed bag, but we could be a leader. We could be a leader, but we do have to take steps forward in order to become that. We are not yet there.