Captive Research Chimp Population Gets A New Home In Georgia 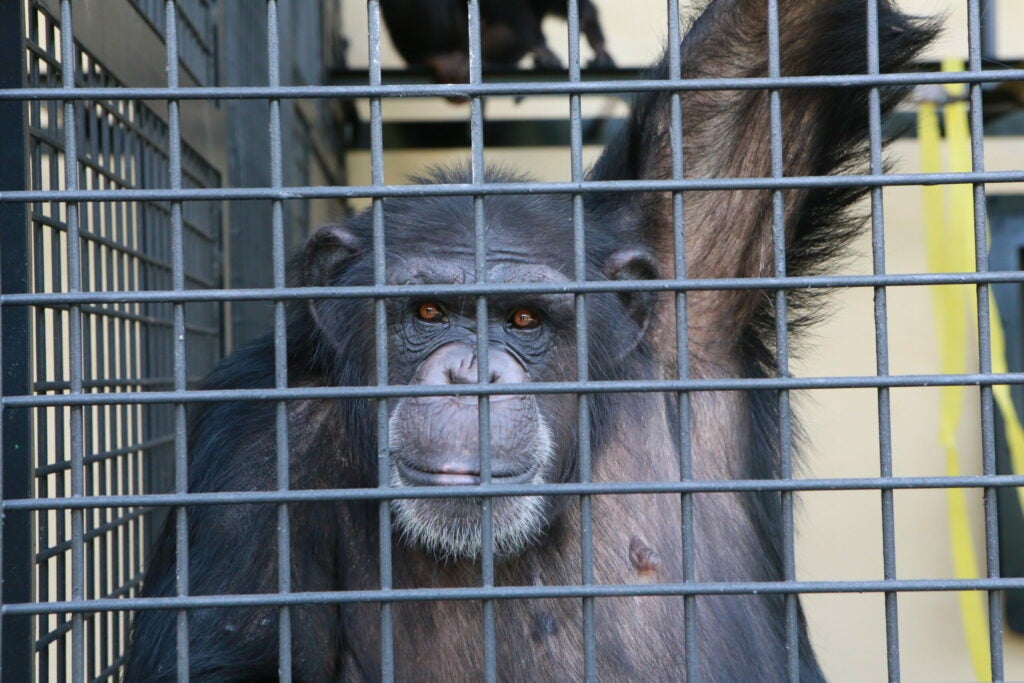 One of the nine chimpanzees transferred to the Project Chimps sanctuary in Georgia yesterday.

The nine newcomers were all chimpanzees that are now being housed at a nearby sanctuary called Project Chimps, a newly opened sanctuary for chimpanzees that are no longer being used in research. The nine chimps that were moved today are a vanguard for a group of over 200 chimpanzees that are being moved from the University of Louisiana’s New Iberia Research Center to their new home in Georgia, where they will live in social groups in small villas, with lots of access to open outdoor space and toys.

The move is due in large part to actions that the federal government took in 2015, when the United States Fish and Wildlife service changed the status of all chimpanzees from “endangered” to “threatened,” extending protections to the captive population that were not previously available. Then, the National Institutes of Health officially ended all use of chimpanzees in biomedical research. Those actions solidified a long-standing trend moving away from using chimpanzees in medical research.

“There’s been this landscape change on the federal level regarding chimps and research,” Sarah Baeckler Davis, President and CEO of Project Chimps tells Popular Science. “We’re at a point now where the public and policy makers, and politicians and scientists, are all on the same page that chimps should not be used in research anymore.”

All of the 220 chimps being moved from New Iberia to the Project Chimp facility were born in captivity, and the New Iberia Research Center says that very few of the chimps in their colony were ever actually used for research. But with funding for chimpanzee-based research drying up, it was time to move the chimps from their working home and into a retirement facility.

That’s where Project Chimp entered the picture. They began speaking with New Iberia in 2014 about taking in the entire population of the research center’s chimps. But where to put such a facility? As it happened, a former gorilla sanctuary in Georgia, the Dewar Wildlife Trust had just sent back its last two gorillas to the Atlanta Zoo, and donated the buildings of the sanctuary to Project Chimps soon afterwards, with Project Chimps buying the facility’s 100 acres of land (and additional parcels on the side) to provide a new home for the large influx of captive chimpanzees that they expected to need homes as the federal legislation went through.

Right now, the facility can house about 80 chimps, and the organization is actively fundraising to build the remaining housing for the rest of the chimpanzees.

“We’re aiming to build up to about 300 chimps. That provides an opportunity for all the remaining privately owned chimps in research to have somewhere to go,” Baeckler Davis says. 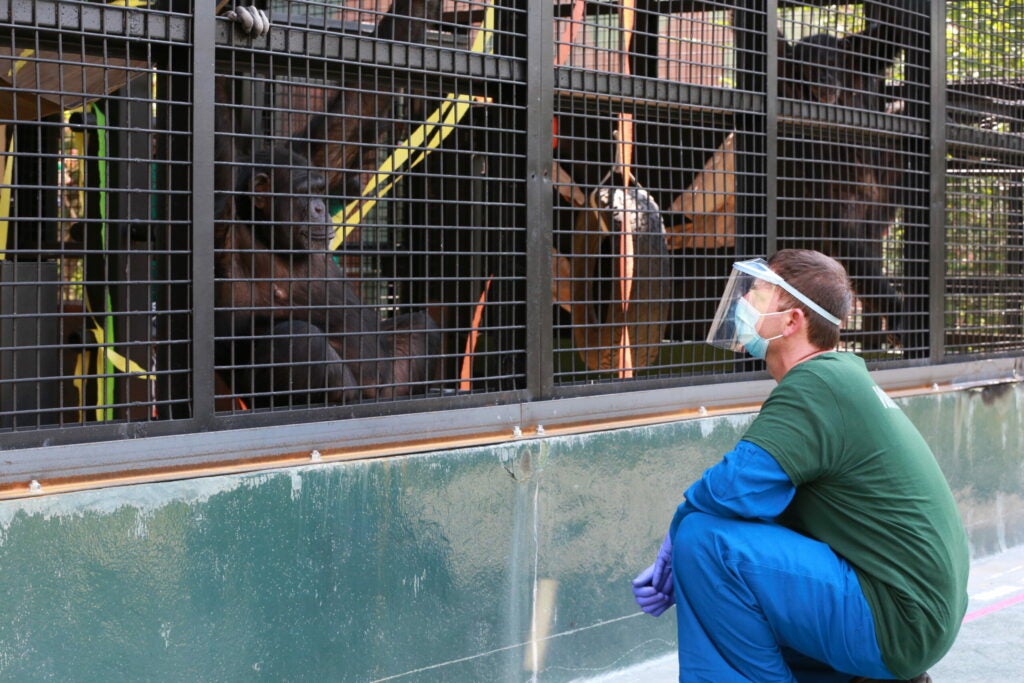 A staff member gets to know the newest residents of the Project Chimps sanctuary in Georgia.

Adjusting to their new life will be different. While they did get opportunities to socialize and play at their old home, at their new home, they will have a lot more decisions about how they spend their time.

“Its generally the first time they really get to be chimps and have some say about how their day and their life goes,” Baeckler Davis says. “A lot of our job is keeping them busy, engaged and enriched and giving them choices about what to do with their day. Who do they spend time with? What do they play with? Do they take a nap all day? Do they run around and jump and climb and explore? Do they like bananas or apples? Any choices we can present to them, we take those opportunities.”

“Of course,” she adds, “Just like the folks we’ve partnered with in New Iberia, we’re still responsible for making choices about keeping them safe and healthy.”

Among those choices that the Project Chimps team is making for the chimpanzees is the federally mandated decision to not allow the chimps to breed. The chimpanzees, which are biologically similar to humans (characteristics that made them attractive to biomedical researchers) will be on birth control, and some will get vasectomies.

“Our philosophy is that we do the best we can for those who are here in captivity, but we don’t want to bring anyone else into that captivity,” Baeckler Davis says. “And even though we have this very caring staff and we have all devoted our lives to taking care of these amazing beings we are still basically prison keepers for them. We have to sort of remind ourselves of that, that they really don’t belong here. We bend over backwards to make them happy and give them a wonderful life, but its not what it should be and we believe it’s not fair to bring more into that situation.”

This means that with a ban on breeding in place, and an aging chimpanzee population, the now brand-new sanctuary has an expiration date.

“Our goal, really, genuinely, is to put ourselves out of business.” Baeckler Davis says. The youngest chimp set to enter the facility is one-year-old, and with a lifetime of around 50 years, that means that the lifetime of Project Chimps is tied to the lifetime of the chimpanzees that it is caring for. And that’s not a bad thing.

“Even at the best possible facility, which I would love to say is ours– even with the best possible standards and best possible care, we still can’t meet their needs in captivity. They are wild animals. They belong in the jungles of Africa, climbing trees. And no matter what level of care we’re able to provide, we’re never going to be able to meet those needs,” Baeckler Davis says.

But for the moment, the chimps at Project Chimps will be getting all the attention and care that they can provide, for as long as they will possibly need it. 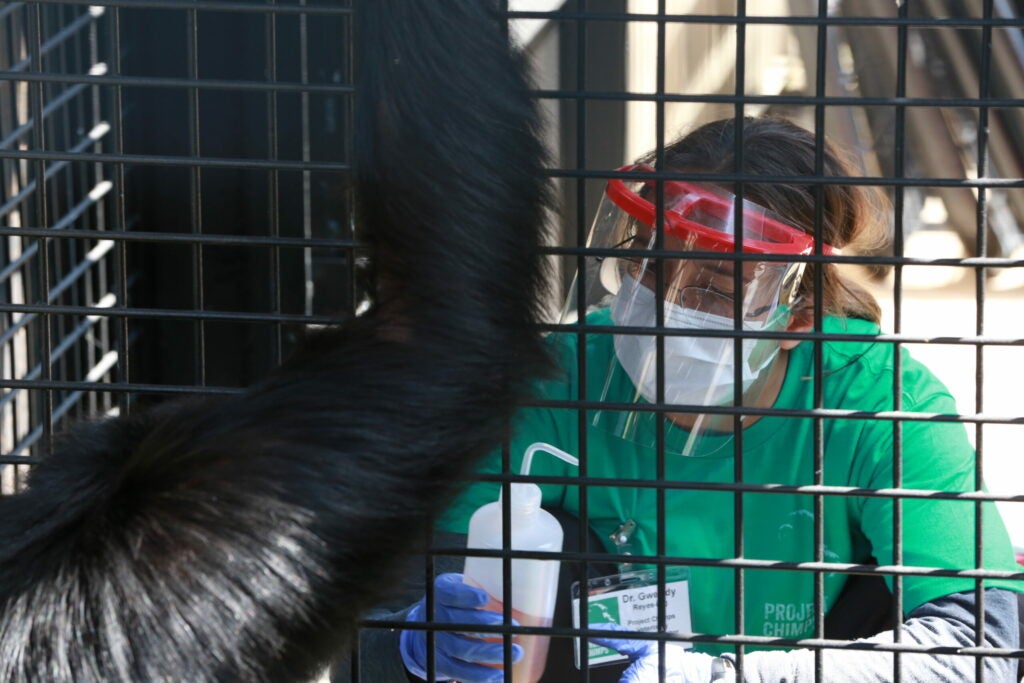 A member of the Project Chimps staff gives one of the newcomers a drink after being on the road. The chimpanzees are in a standard quarantine, to make sure that they are healthy after their ten hour drive from Louisiana.
Animals
chimpanzees
chimps
NIH