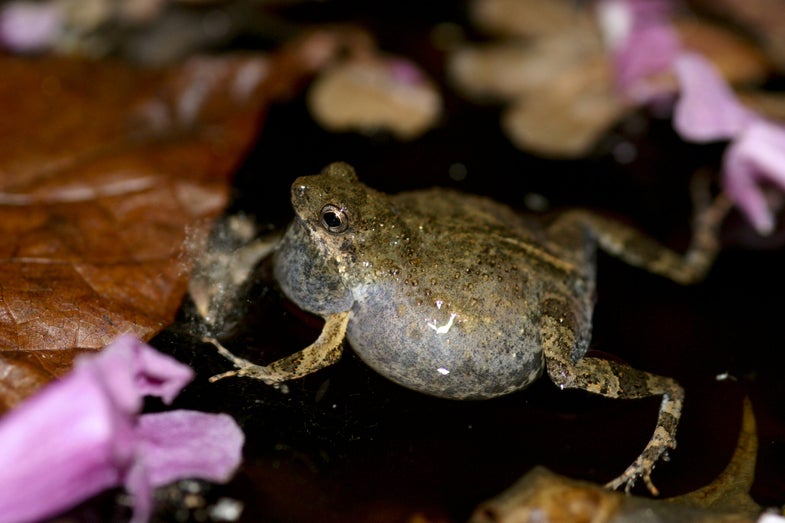 Like humans, frogs love a good tune—though our amphibious friends have a lot more at stake when they croon. The quality of their mating call helps determine which males get to get busy and which spend their nights alone. And at least as far as túngara frogs are concerned, the more complicated your tune, the sexier you are.

This is all according to a new study in the journal Nature Ecology & Evolution, in which a group of international researchers explored the sex appeal of túngara frogs in the Panamanian jungle.

They started with what’s now common knowledge: animals change their behavior in urban areas, often in response to light and noise pollution. Birds and insects are widely known to adapt to these human-occupied areas—maybe túngara frogs have too. The first test was simply to go record a bunch of frogs in Soberanía National Park and in Gamboa, a nearby town. The urban frogs, it turns out, sing more complicated songs. A basic túngara call is kind of a whine, but they can turn up the charm by adding elements called “chucks.” Unfortunately for them, bats and midges are both attracted to complex tunes too. That’s a problem in the forest, but between light and noise pollution, even the relatively small Gamboa provides enough protection from predators to allow túngaras to sing their hearts out without so much fear of being eaten or bitten.

So what if you put a country frog in the big city—would he change his tune? These researchers wondered, too, so they transplanted a total of 112 males from forest to town or vice versa for at least four consecutive nights and monitored them to see how their mating calls changed. (Don’t worry, they didn’t just throw them out into their new environments. They used small mesh enclosures to ensure no harm came to the frogs, but that they were still exposed to their surroundings.) It turns out, túngaras from the forest don’t seem to increase their song complexity, at least in the span of a few days. But take a slick city frog and put him in the jungle and he adapts right away. Urban túngaras quickly learned that their fancy singing wouldn’t work the same out in the wilderness as it did in town, toning down the complexity to account for the newfound threat of bats and midges.

“I was not surprised to find differences in the call, or predation pressure,” says Wouter Halfwerk, assistant professor of ecological sciences at Vrije Universiteit in the Netherlands and the lead author on the study. “But I was surprised by the fact that an urban frog can call like a forest frog, but not other way around.”

That poses some potential problems, especially given just how much the ladies prefer city boys’ calls. Halfwerk and his colleagues did an experiment to quantify the competitive edge by playing recordings of urban and rural frogs to captured female túngaras, noting how many hopped toward each sound. Overwhelmingly—and irrespective of whether the ladies were from the forest or the town—the female frogs preferred the more complicated, cosmopolitan mating calls. That suggests it’s not merely that city life gives males the freedom to sing more complex songs; there’s already sexual pressure to do so, but forest-dwellers have to weigh this against protective instincts.

It also suggests that urban frogs might eventually take over. “If there are underlying genetic differences between the two types, than female mate choice may favor the urban alleles,” Halfwerk explains, “and given sufficient gene flow and a relatively large urban gene pool, the alleles for the forest phenotype may simply disappear via random drift processes.”

And this wouldn’t be unheard of. Though their more complex calls put them at higher risk of predation, it might be a worthwhile evolutionary strategy for the urban frogs. Maybe they don’t live as long, but if they have enough of a reproductive edge over the jungle frogs it may not matter—it’s what biologists call “live fast, die young.” Halfwerk explains that this tradeoff is pretty common in evolutionary biology, and that as of right now they haven’t observed any major disadvantages that the urban frogs are getting from singing more complex songs. It’s possible that the forest frogs have some evolutionary advantage that biologists aren’t yet aware of, but either way the urban túngaras may win out over a long enough period of time. Small advantages can add up across the years.

It’s not clear yet exactly what that would mean for túngara frogs, but it would certainly be big. As Halfwerk points outs, “I think the take home message should be that urbanization can have a big impact on local communities, which in turn alters the evolutionary course of a species.”