A decade after his death, Steve Irwin is still the face of wildlife education

The Crocodile Hunter's successors reflect on his legacy 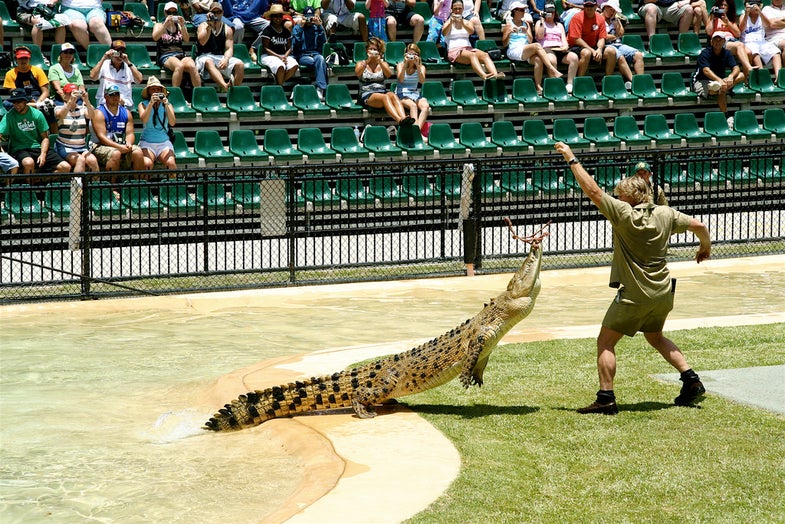 “Name a science communicator” seems like a simple enough request, until one adds a stipulation. No Tyson, Nye, Kaku, Feynman, Sagan, Derek Muller, Hank Greene, Michael Stevens, Phil Plait, Destin Sandlin — no, name a wildlife educator. The responses I received ranged from dazed to confused. After asking 100 people, the only surefire way I found to get an answer was to ask a follow-up question: “Crikey, can’t you think of anybody?”

Over a decade after his untimely death, Irwin is still the reference point. Irwin stands as such an archetype, wildlife educator Phil Torres tells PopSci, that whenever he informs someone that his own job is traveling throughout the world educating people about animals, the response is inevitably some variation of the phrase “Oh, Like Steve Irwin?”

Incapable of being an objective documentarian, the khaki-clad embodiment of unbridled enthusiasm “had two speeds. He was either asleep, or going a 100 miles an hour” according to toxinologist and wildlife educator Jamie Seymour. “You could have two cockroaches crawling up a wall,” and most wildlife presenters would “look at it and go, ‘Yeah, well that’s not much.’ You let Steve loose on it, and it’d be ‘Who-ho, Crikey, Look at ‘em go!’”

He caught audiences like his zoo teams captured temperamental crocs. While his theatrics had the target chomping at the bit wondering if this time he’d get caught, audiences were positioned and tagged with his message for conservation — released, unbeknownst to them, having become a vehicle for the preservation of wildlife.

“The moment I get you in to see whether I’m gonna do anything wrong,” Irwin once told Seymour. “I can tell you anything.” And so he did, preaching conservation and converting the repugnant image of dangerous animals.

He wasn’t a perfect communicator. It’s arguable whether the “don’t try this at home” message was taken to heart by the children in the 120 countries in which his show aired — I certainly ignored it. Moreover, he communicated little about the natural behavior of undisturbed animals. But what he lacked in objectivity, he made up for in enthusiasm. His unbridled excitement brought the criticality of conservation down to Earth and personalized it, made it seem like an adventure — one important to you. He served as an inspiring model to which a world of children could look for vindication, and say “I can be like him.”

Torres tells PopSci, “When I was a kid, everyone was outside in the dirt playing with bugs, catching butterflies. But then, you know, you get older, and there were fewer and fewer kids outside with me.” YouTuber Jessi Casteneda recalls that when she ran around shouting “I love animals” people boxed her in, saying “Oh, you wanna be a vet.”

It was too early to see when he passed, but in proving that being a vet wasn’t their only option — that it was okay to stay out and revel in the dirt, dust, butterflies, and snakes — Irwin helped legitimize the dreams of a generation of wildlife educators.

And it’s a good thing he did, because as it stands, wildlife education has been sidelined. Big ticket documentaries like March of the Penguins, Planet Earth, Life, and Frozen Planet have given way to more economically produced astronomy shows like Cosmos and Through the Wormhole With Morgan Freeman. A renewed space race, the advent of quantum physics, and AI development have spawned more prolific headlines, while wildlife education has been consigned to the competitive waters of Youtube.

But if wildlife education is left by the wayside, even as we thaw our way into a warmer future where the beasts around us face unknown fates, then who’s left to personalize what we stand to lose?

A few of PopSci’s favorite educators are working hard to pick up The Crocodile Hunter’s mantle.

“I don’t care if you learn. I care that you’re enthused — that you leave hungry to learn more.”

Jamie got started in wildlife education after working with Irwin on his last documentary. Well, to put it more accurately, he “thought Steve was an idiot” and argued with him. . . until he was won over. Noticing a gap since Irwin’s passing, and realizing that fellow scientists dipping their toes into communication “were boring the hell out of everyone,” the outspoken aussie — in addition to studying the world’s most toxic animals — decided to jump into communication himself. Now, he’s started producing an educational YouTube series called The Nature of Science through James Cook University, and he hopes to use it to excite people into questioning the world themselves.

Phil Torres took a circuitous route to science communication. While conducting entomology research, Phil one day decided to run off to live and study in the Amazon rainforest for a year. Emerging from the jungle an experienced photographer, entomologist, and videographer, he decided to take up communication. “I figured that if I failed and ended up broke, my sister had a couch I could always crash on.” Well, that didn’t happen. Instead, he became Al Jazeera’s Calvin Klein model for science on Tech Know, and has since ventured into wildlife communication on his independent YouTube series The Jungle Diaries.

“After I’ve talked to a classroom, and I see a kid. . . telling someone facts about an animal in the most excited way. . . it feels like I’m bigger than myself”

“Being able to see [Irwin] showing just unbridled enthusiasm for animals. . . it gave me a ton of confidence in pursuing my dreams,” Casteñeda says. Although she might work with less dangerous animals than Irwin preferred, if you’re looking for the same frighteningly unbridled enthusiasm, it’s all here with the face of the Animal Wonders Montana, SciShow Talk Show, and SciShow: Kids YouTube channels. Much like her primogenitor, she got started in wildlife communication after she and her spouse up and decided to do something crazy: Start a wild and exotic animal rescue. . . and film a video series on it, because — well, why the heck not?

“I’ve been filming wildlife every single day for the past 13 years and I haven’t even scratched the surface. . .the more I do, the more I realise there is left to do.”– in Wanderlust Magazine

Five years later, the author, martial artist, dancer, climber, explorer, athlete, narrator, wildlife educator, documentarian, and snake wrangler must feel like there is a mountain of work still left. One of the most accomplished wildlife presenters on the planet, Backshall was unfortunately unavailable for comment, having recently finished a series with Discovery Channel. However, when he returns, he’ll be back in the saddle again, with two expeditions, to Kenya and the Arctic circle, planned for next year.