This tiny, laser-powered RoboFly could sniff out forest fires and gas leaks

Researchers hope the mechanical bug could help scientists save the climate. 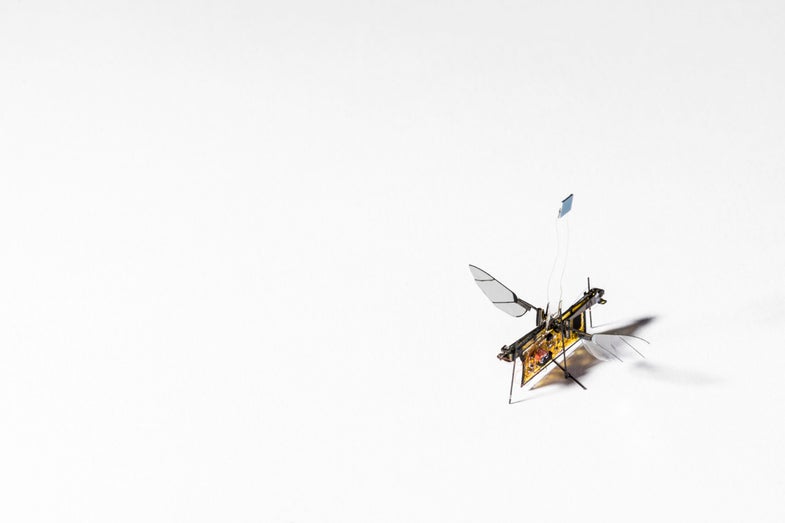 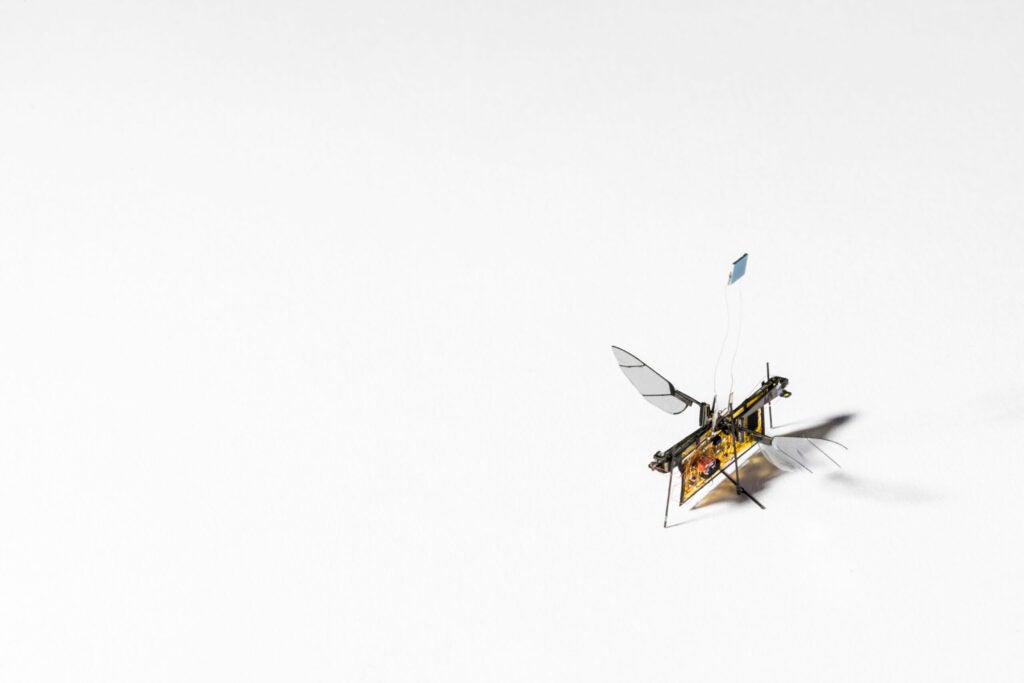 Engineers power RoboFly by pointing a laser beam at a photovoltaic cell (blue) above the robot.

This is one flying insect you don’t want to swat. It doesn’t bite, sting, or spread disease and someday it could be a life- and climate-saver. In time, it could survey crops, detect wildfires, poke around in disaster rubble searching for survivors and sniff out gas leaks, especially global warming-fueling methane, a powerful greenhouse gas many times more potent than carbon dioxide. Introducing…RoboFly! It’s the first robotic flying insect that lifts off without being tethered to a power source on the ground, weighs just a bit more than a toothpick, and takes off using tiny beating wings — not propellers, as drones do — driven by a laser beam. A minuscule onboard circuit turns the laser energy into electricity, which causes its wings to flap.

Right now, RoboFly can only take off and land — but cutting the cord is just the beginning. “Before now, the concept of wireless insect-sized flying robots was science fiction,” says Sawyer Fuller, assistant professor in the University of Washington’s department of mechanical engineering and one of its creators. “Our new wireless RoboFly shows they’re much closer to real life.”

The researchers presented their findings at the recent International Conference on Robotics and Automation in Brisbane. 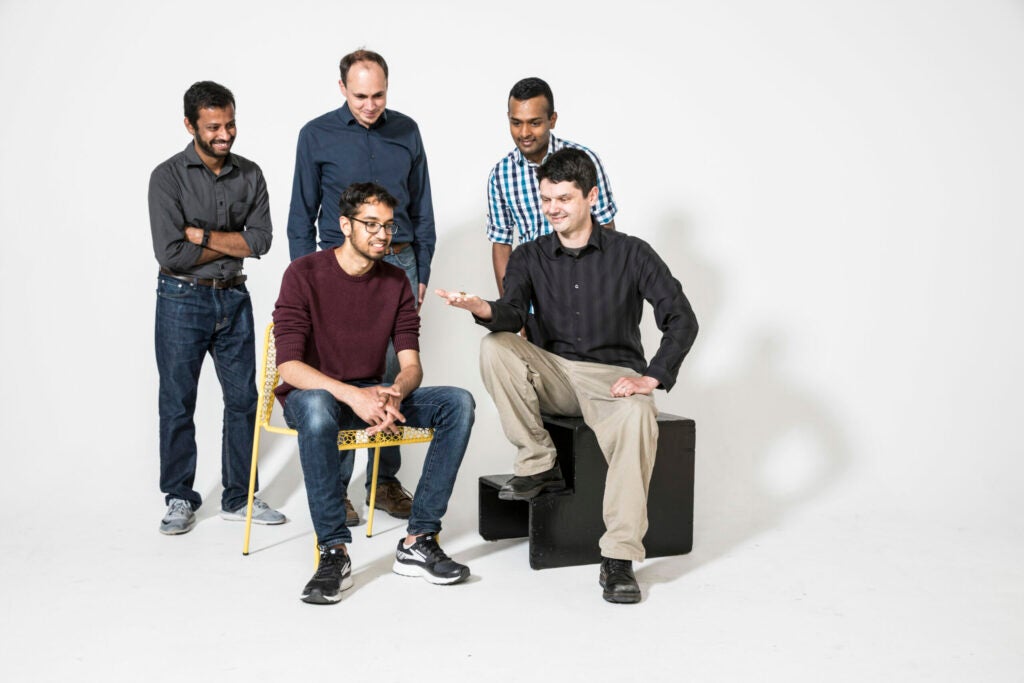 Ultimately, the scientists believe their invention will have the ability to hover, perch on things, and fly around by steering the laser, or possibly by adding tiny batteries or culling energy from radio frequency signals. The goal is to direct it into performing specific tasks, such as surveying crop growth and detecting gas leaks. They even think it might be possible to equip them with smoke detectors so they can find forest fires more rapidly than larger robots.

“Studies have suggested that natural gas — methane — leakage may be so prevalent that it may actually be a worse greenhouse gas emitter per unit energy than coal,” Fuller says. “This is because natural gas has a much greater deleterious greenhouse gas effect than the carbon dioxide that results from burning carbon-based fuel. My hope is that creating a technology that makes it convenient to find leaks will help them be patched up.” 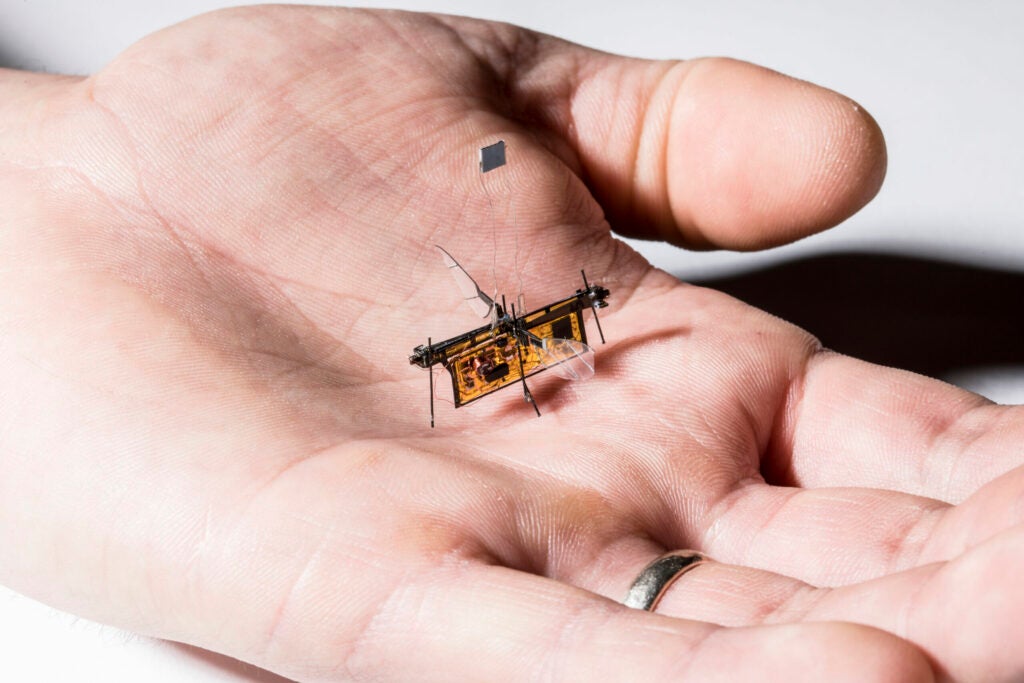 RoboFly, the first wireless insect-sized flying robot, is slightly heavier than a toothpick.

“You will be able to buy a small container of these little fly robots, open it up, and they will, all on their own, fly out and follow plumes in the air to find leaks,” Fuller explains. “Once they have found one, they will land near it and start flashing a light. A human would then just need to look around to see where the leaks are. This would replace the painstaking and dangerous process of covering the area with a gas sensor by hand, which is how it is done now.”

The level of autonomy needed to do this is still a few years off, he says. “That said, I think it is going to be very possible,” Fuller says. “Nature has proven that it is possible in any number of species, from flies to vultures, to use the information carried in a chemical plume in the air to find its source.”

The device also could have valuable agricultural uses, “flying down in the plant canopy, looking for disease and measuring parameters like humidity, with much finer detail than is possible with overhead drones, enabling a new sort of ‘micro agriculture,’ that could locally tailor the environment to optimize yields,” Fuller says.

Thus, he says releasing the bug from its leash “was really a necessary step to enable them to fly freely and perform the applications we envision.”

Perching — staying aloft in the air with buzzing or flapping, landing and staying there — is another goal. “Perching is something we’re interested in because that’s a very efficient way to operate for a long time, and it has already been demonstrated on the RoboBee, which still had a wire at that point,” says Johannes James, a mechanical engineering doctoral student and member of the team. “We’ve already started there.”

Robotic flies could alight on supports along a pipeline, or in a refining facility, for example, and perform long-term sensing along the length of the pipes, and then move elsewhere to collect more data, according to James. Also, since fluttering the wings eats up power, the ability to stay in one place without flapping would save energy.

“This distributed sensing kind of operation gives you some big advantages over a single expensive robot for applications like finding hard-to-detect leaks,” he says. “The ability to perch or move along the ground would help this by allowing them to operate longer.” 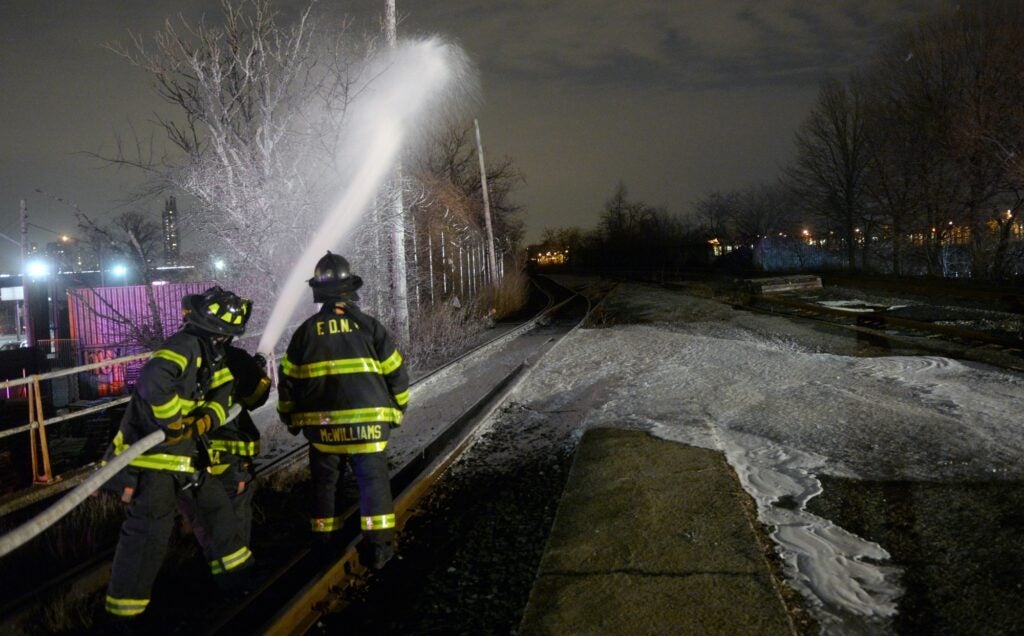 Firefighters respond to a gas pipeline leak in Brooklyn, NY, 2016.

The team used a narrow, invisible laser beam to power the insect, pointing it at photovoltaic cells attached above the robot, which converted the laser light into electricity. But the laser alone can’t produce voltage strong enough to get the wings moving, so the scientists also designed a circuit to boost the voltage coming out of the cell enough to power flight. Eventually, the team hopes to use batteries as an energy source, “but for now they are too heavy for fly-sized robots.”

“Future work, as far as power solutions, will include aiming the laser for sustained flight, gathering energy from ambient light levels for short flights and then recharging; and a third, which really excites me, is wireless power through coupled coils, somewhat along the lines of Nikola Tesla’s Wardenclyffe and Colorado Springs projects,” James adds. “The third is hard to explain, but is certainly cool.”

The scientists also placed a microcontroller in the insect’s circuit that acts like a brain, telling the wings when to fire.

James points out that robotic critters might even enhance scientists’ knowledge of real world bugs.

“We still don’t understand very well how flying insects work,” he said. “In fact, they’re amazing when you think about it. That’s where the RoboFly can lend a hand. Robots are very valuable to biological research, and developing a wireless RoboFly is a crucial step to understanding the behavior of actual insects.”