And they're ultra-stylish, to boot 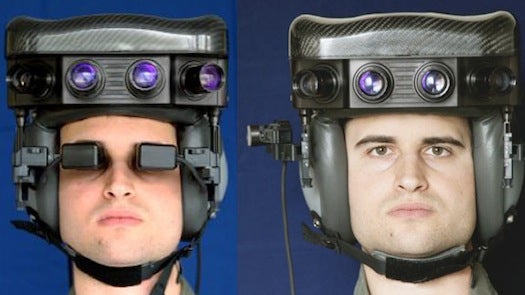 Night vision goggles are, according to SA Photonics (a manufacturer of night vision goggles, naturally), a “key enabling technology” that has allowed the U.S. military to “own the night”. SA Photonics has cleared some of the existing technological hurdles with their new High Resolution Night Vision System (or HRNVS–looks like someone could use some acronym assistance), which doubles the field of view of existing goggles, a real boon to pilots and others who need to see in the dark.

The odd design gives each eye the benefit of two night vision sensors, for a total of four, with those two sensors coupled to create a single high-resolution (though we’re not clear on exactly how high) display. The layout of the displays allows quick removal in case of unexpected light, put when in use, allows for a pretty much uninterrupted panoramic view, unlike past models. It may not be based on insect vision, but it still looks pretty effective.

But the field of view enhancement might be the most important–at least, the improvement pilots and other military personnel have been demanding. The HRNVS boasts an 82.5-degree view, more than double that of current night-vision systems. It also, intriguingly, has certain image enhancement abilities, sort of like how a DSLR camera can use light in different ways to enhance a photo. Those abilities include contrast/edge enhancement, speckle reduction, and even video recording, all of which is new to this sort of system.

The HRNVS system will be officially shown off a week from today in Orlando at a defense conference, though it’s not clear when we might actually see (or not see) it in action.