We've known this for years—but it's still in the news. 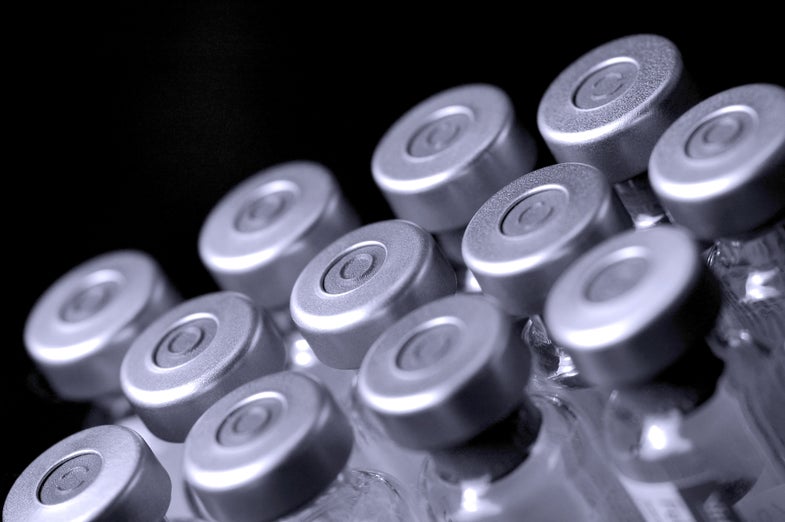 Egg allergies used to be one of the only legitimate reasons not to get your annual flu shot. But since 2011, the Centers for Disease Control and the American Academy of Pediatrics has recommended that everyone, egg-allergic or not, get the vaccine. The American College of Allergy, Asthma and Immunology (ACAAI) joined a year later. And yet somehow, a recent update to the ACAAI’s recommendation is making headlines about how people with egg allergies can “now” get the flu shot.

For years it was pretty much assumed that vaccines grown in eggs, like the flu shot, would cause an allergic reaction. The vaccine does contain small amounts of egg albumin, which is the protein that people can react to. But it turns out that the shots are safe no matter what allergies you’ve got.

Is the flu shot really safe for people with egg allergies? How have we gotten through the last six years not knowing about this? And why did we think the vaccines might be dangerous in the first place?

In our minds, our doctors spend plenty of time in their diploma-laden offices reading up on new research that might inform their decisions. The reality is that most general practitioners are trying to squeeze 40 to 50 patients into a work day, leaving barely enough time to get from one room to the next, let alone read medical journals.

Take peanut allergy guidelines, for example. The National Institutes of Healthy completely reversed its stance on introducing allergens to infants. But in a recent interview with PopSci on the subject, Dave Stukus, an associate professor of pediatrics at Nationwide Children’s Hospital and an official spokesperson of the ACAAI, said that the average primary care physician is too busy diagnosing hundreds of conditions to change their habits overnight. “It’s known that with new clinical guidelines, it takes 10 years before they’re implemented in practice,” he said.

And then doctors who’ve spent years telling parents not give their kids peanuts will have to spend time convincing them that the opposite is true. It can be hard for patients with allergies—or allergy-prone children—to want to take what they see as such a big risk. They trusted that original advice, and now suddenly they’re being told the opposite. Who’s to say that this recommendation is any better than the last?

But the unfortunate reality is that some of recommendations are based on caution rather than evidence. Doctors had to give advice one way or the other as to whether there’s enough egg in a flu shot to give patients a reaction, and in the absence of studies proving that the vaccine is safe, they have to err on the side of caution. So the recommendation for many years was not to get the shot, or to get thenon-egg-containing shot grown in animal cells instead.

That changed back in 2011. But physicians may not have heard, or may have considered the change risky. Or hey, maybe they just didn’t want to sit and try to convince their patients when they’ve got 45 more to see.

We’ve had egg-based vaccines since the 40s and 50s, and it was assumed for most of that time that an allergy precluded you from getting the shot. Just two percent of people in the U.S. have an egg allergy, and even fewer have a severe allergy, so it was easy for those people to be exempted. It took until the 21st century for us to really test the hypothesis. By 2011, there had been several large studies that showed people with egg allergies could likely get the shot under supervision, or could at least consult their allergist if they had a life-threatening allergy. That’s when the CDC and AAP changed their recommendations.

Now, there have been even more studies showing that vaccines are perfectly safe even for those with severe allergies. Across 4,315 egg-allergic patients (of which some 656 had severe allergies) in 28 studies, there were zero cases of anaphylaxis. Some people got hives, but at rates no higher than the average population. There were even studies showing that the live-attenuated vaccine (as opposed to the inactivated virus version) was safe for kids with egg allergies. Since it’s a slightly different preparation method, no one was sure whether allergic patients would react differently to it. Now we know that all versions of the vaccine are okay. The live vaccine isn’t recommended this year, but that’s because it’s probably not as effective, not because it’s unsafe.

This update to the ACAAI recommendation reflects this new evidence, and says that not only should egg-allergic people get the flu shot, but that they also don’t need to take any extra precautions. The CDC suggests that people with severe allergies get the vaccine in a doctor’s office under supervision, rather than in a drug store, just in case.

It can be hard for people with life-threatening allergies to take new advice like this, especially if they’ve never had a problem following prior recommendations. If you’re feeling this way, you can go ahead and ask for the cell-based vaccine, which doesn’t contain any egg at all. You should just know that the science is now really solid on this—even egg-based vaccines don’t pose a threat. But like all medical decisions, it’s up to you. The important thing is that you get a flu shot—any flu shot—to help protect people who can’t.