The myth of the man-flu: Do men really get sicker, or are they just whinier?

One scientist set out to find the truth (sort of). 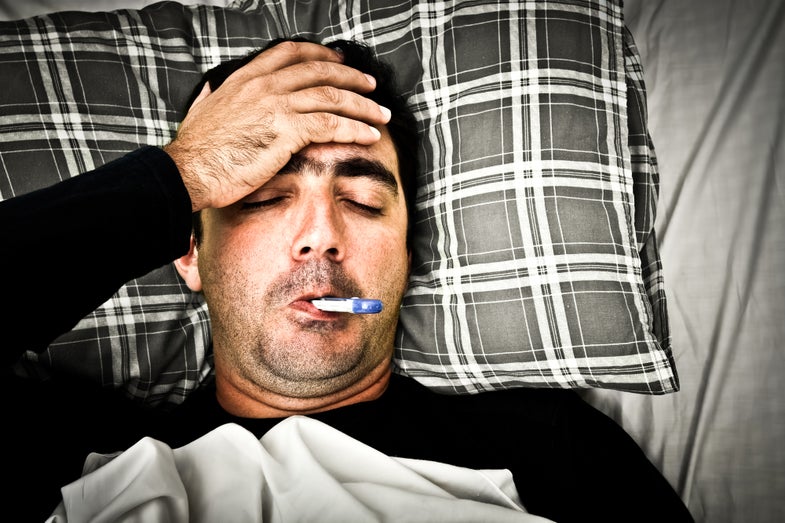 Kyle Sue is the only doctor in town—literally—and he has no sympathy for your sniffles. Today he’s too busy providing medical aid to the 3,100 Inuits who live in the hamlet of Arviat, which is roughly 500 miles north of Winnipeg and accessible only by plane. His patients suffer from tuberculosis and other infectious diseases at rates rivaling developing nations, which is none too surprising given that they’re often living 14 to a two-bedroom house.

But back when he was a master’s student, Sue had an idea. An idea about the man flu. One year later, that idea became a paper in the British Medical Journal’s annual Christmas issue, and would prevent him from sleeping the night of December 10, 2017 because too many people were calling to talk to him about it. After all, as the only doctor in town, he really has to keep his phone on.

Back in 2016, Sue wasn’t caring for a community of Inuits. He was just hoping to entertain his class. The assignment: to give a two-minute presentation to his fellow students. The topic: his choice. He’d come down with the flu the week before, and being male, the idea of the “man flu” seemed (as he put it) “especially pertinent.” He did some research and presented his case: the man flu isn’t just the result of whiny guys hoping their ladies will feed them soup. Men really do get sicker.

The presentation was such a big hit that he decided to do an actual study about. He spent the intervening year researching the subject in between, you know, providing actual medical aid to his community, and then submitting the piece to BMJ.

If you haven’t heard of it, the annual Christmas Edition of BMJ features very real medical science, but with a bit of fun. No one wants to read about the rising flu season or breast cancer this time of year, so BMJ leans into the holiday spirit with scientifically accurate levity. The articles are peer-reviewed and must cite other medical journals, and though they’re more jocular than normal, they’re not pseudo-science.

Sue’s article cites a wide range of sources, from epidemiology to mouse models of influenza, and concludes that it may not be that men are wimpier—they may actually get sicker.

Studies in mice suggest that females tend to have more robust responses to infections, which may have some root in the way estrogen affects the immune system. Testosterone, in contrast , seems to have some kind of immunosuppressive effect. Human women get stronger reactions to flu shots and more men become hospitalized with influenza. All this seems to add up to the idea that people with more estrogen actually have stronger immune systems, and therefore are better able to fight off infections like the flu.

But there are a few nuances that this perspective leaves out. For one, it’s mainly young boys and elderly men who have higher hospitalization rates, says Sabra Klein, an associate professor at Johns Hopkins School of Public Health. Her work helped the World Health Organization write their report on how the flu affects people differently depending on sex. She points out that during our reproductive years, women actually have the more severe reactions, and only in part because pregnant people are more susceptible to infections like the flu. It’s also because young women can have such intense immune responses that the reaction itself becomes dangerous.

For another, Klein notes that when you look at differences between men and women, you have to look both at the biological differences and at the social constructs that affect each. “In some countries, for example, if women have less access to health care or treatments, then it may appear that men are being hospitalized at a higher rate,” she says. “In other countries, if boys are more valued than girls, then parents will bring their male babies to the hospital more often than they will their female babies. These unfortunate facts create biases in our interpretation of data.”

Sue understands all of this, and acknowledges much of it in the section of his paper that discusses the limitations of his conclusion. He even realizes his own confirmation bias. In his personal, anecdotal experience, men seem to get more sick than women—but he’s now also looking for men who are more sick. His reviewers pointed out other limitations, like the lack of data on smoking and drinking rates, or how the willingness to see a doctor could have an effect on hospitalization and mortality statistics. “I didn’t mention anything about that,” he says. “Absolutely that’s true, so I made sure to put those as limitations.”

This is not the end-all-be-all of the man flu story. No one has proved its existence either way, nor are they likely to. Because after all, this is the Christmas Edition. We’re all just looking for ways to bide our time until the end of the year, and if the man flu gives us something to laugh about with our coworkers at the company Christmas party, then so be it. Happy holidays, everyone.