Plus, the out-of-Asia theory for big cats and Ice Age animals 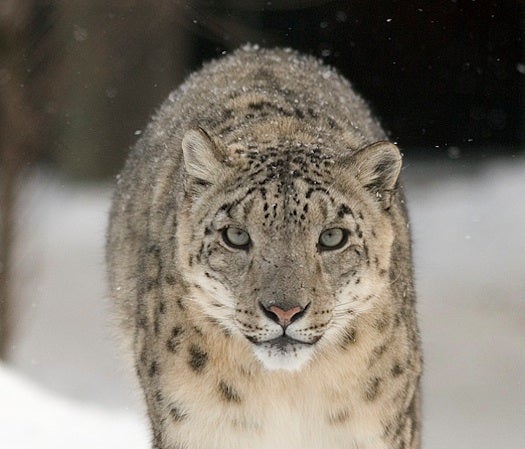 Six million years ago, the Himalayas were still pretty darn cold. The terrain was probably a bit rougher than they are nowadays, having had less time to weather. Yet, just as they do today, animals lived in that inhospitable climate, navigating the rocky terrain and ambushing prey among the bluffs. One such resident was Panthera blytheae, a newly discovered animal that’s now the oldest-known big cat by about three million years. 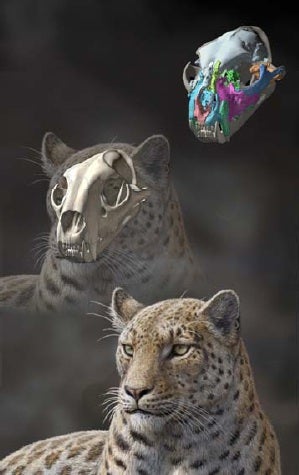 “It is probably pretty reasonable to assume it looked like a clouded leopard,” says Jack Tseng, whose team found and characterized the world’s first discovered Panthera blytheae fossils while Tseng was a doctoral student in paleontology at the University of Southern California. Judging from its skull, the one fossil on which the species description is based, the cat weighed about 40 or 50 pounds, Tseng says. The team determined its closest living relative today is the snow leopard, which still lives in the same kind of environment.

The fossil provides more evidence of something scientists had suspected from genetic analyses of living big cats: That they originated in Asia, even though the previous oldest fossils had been unearthed in Africa. “It’s a genuine, hold-in-your-hand fossil to support what the DNA analyses have suggested for some years,” says Hannah O’Regan, a paleontologist at Liverpool John Moores University in the U.K. who studies big carnivores in Africa. O’Regan wasn’t a part of Tseng’s team.

The team’s analysis also found the big cat family tree may be a bit older than previously estimated. And it finds that, in spite of the fossil’s age, Panthera blytheae likely isn’t the base of the cat family tree. Instead, “somewhere there is probably a more primitive big cat, waiting to be found,” Tseng tells Popular Science. 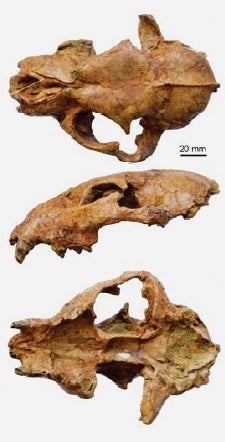 The team found the fossil in a large, high-altitude basin in the Himalayas in Tibet. The cat came from a rich deposit of fossils that offers some clues to what Panthera blytheae‘s neighbors were like. The deposit included badgers, squirrels, foxes, three-toed horses, antelope… even a wooly rhinoceros (Yeah, like the mammoth, but a rhino). The antelope limb bones are all oriented in same direction in the deposit, so Tseng thinks there was probably a river or creek running through the area and that animal bodies would get swept into the water, then pile up downstream. “Otherwise,” he says, “it’s impossible to fit all these animals in this hole.”

Since the team first found the deposit in 2010, they’ve published numerous papers about the animals and climate there. It was probably about as cold and at a similar elevation as it is today, they’ve concluded. In addition to a river, there was also a lake in the basin, which grew and shrank with time and now is gone.

“It probably looked like a giant water hole with a lot of these animals around in this basin,” Tseng says. The antelope and rhino likely lived on the open plain in the basin, while Panthera blytheae likely lived in the surrounding hillsides.

Most interestingly, the basin was cold at a time when the rest of the Earth was not… but was about to be, thanks to the upcoming Ice Age. Tseng and his team hypothesize the basin became a cradle for cold-weather adaptations before the Ice Age. Once that climate spread across the Earth, the descendants of Panthera blytheae’s neighbors spread as well.

Tseng and his team, including paleontologists from the U.S., China and Canada, published their work today in the Journal of the Royal Society B.