More Than 200 Earthquakes Have Shaken Oklahoma Since 2009 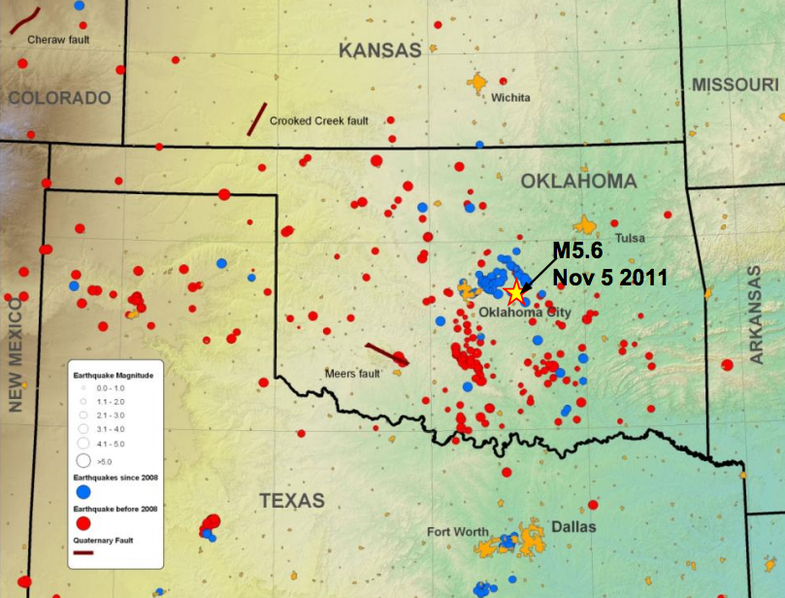 Oklahoma often gets the short end of the natural disaster stick. Though it’s well known as a hotspot for tornado activity and has a history of severe flooding, Oklahoma has also had more than its fair share of earthquakes in the past few years. According to the U.S. Geological Survey and the Oklahoma Geological Survey, there’s been a significant rise in the frequency of seismic events since 2009. More than 200 earthquakes with a magnitude greater than 3.0 (big enough for people to feel) occurred in central Oklahoma during that period.

The number of magnitude 3.0 earthquakes in the region has risen to an average of 40 per year since 2009, compared to only three per year between 1975 and 2008. While swarms of earthquakes can be part of the natural seismic patterns of a region, linked to volcanic or tectonic activity, the USGS analysis suggests this isn’t what’s happening in Oklahoma. “We’ve statistically analyzed the recent earthquake rate changes and found that they do not seem to be due to typical, random fluctuations in natural seismicity rates,” says USGS seismologist Bill Leith.

Some geologists have argued that the largest earthquake in Oklahoma’s recorded history, the 5.6 magnitude quake that hit Prague, Okla., in 2011, was the result of wastewater injection from oil and natural gas operations. in 2011, a USGS study determined several minor earthquakes in Oklahoma to be the likely result of hydraulic fracturing (fracking), which uses pressurized fluid injection to create small underground fractures to release oil or gas.

The greater problem, though, isn’t the fracking itself, but the wastewater it generates. According to Mother Jones, the oil and natural gas industry generates 878 billion gallons of wastewater every year, injecting about a third of it back into the earth. Injecting all this fluid into the ground can elevate the pressure near faults, causing them to slip, resulting in quakes. Deep mining can also cause moderate earthquakes, according to the USGS.

The USGS says it is working with the Oklahoma Geological Survey to determine further to what extent activities like wastewater disposal is triggering these earthquake swarms.