One genus of South African dung beetle traded flying for a ridiculous-looking run. 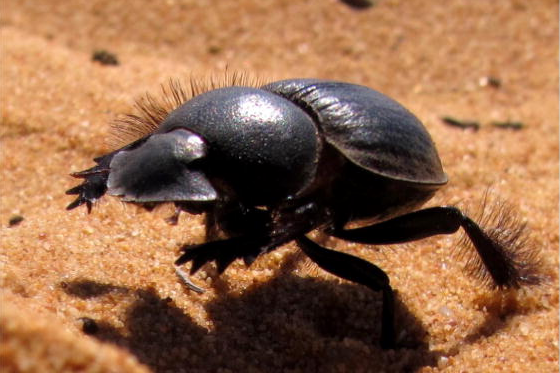 Most insects walk with an ambling, tripod gait, keeping at least three legs on the ground while the others move. This type of walk is the most common gait in the animal kingdom. But somewhere along the line, three species of dung beetle decided to break away from the alternating-leg pack, developing the only gallop in the insect world. Instead of moving legs on each side separately, Pachysoma endroedyi, P. hippocrates and P. glentoni move each set of legs in synch, like a bounding rabbit or a speedy horse. Just watch:

Why exactly these beetles might have developed this gallop is unclear. It’s incredibly inefficient. The gait only utilizes the front and middle legs; the back legs drag behind and “seem to contribute little to propulsion,” according to the study describing the phenomenon. It’s not any faster than the typical beetle walk, either—the tripod gait seems to actually be faster. But despite the fact that these species of beetles are capable of tripod walking, they seem to prefer to gallop.

Right now the evolutionary advantage of the slow beetle gallop is unknown. The researchers suggest it could possibly be more efficient in terms of energy consumption or make it easier to transport loads across the sand in the beetles’ native South African and Namibian deserts.

“For most dung beetles, it’s always a one way trip —grab the poo, run away and never go back. The very marked pacing of Pachysoma‘s gallop might be giving it a better signal in terms of estimating the return distance from the food to its nest. When it gallops, it slips less in the soft sand,” explains Marcus Byrne, one of the study’s authors and an entomology professor at Wits University in Johannesburg, South Africa.

The study appears in this week’s Current Biology.